Israeli authorities ordered the demolition of a Palestinian village of Farasin, west of Jenin, in the northern occupied West Bank, on Wednesday, the head of the village council stated.

The head of Farasin village council, Mahmoud Amarneh, told Palestinian WAFA News Agency that Israeli forces invaded the village and handed out 36 demolition orders for all standing structures and water wells in the Palestinian village where 200 civilians live.

Amarneh said the military told the residents that the structures will be demolished in just a few days.

“The village has a 200-year old well and several ancient buildings,” he said, urging international intervention to stop the occupation state of Israel from displacing 200 people, while at the same time, expropriating more Palestinian land. 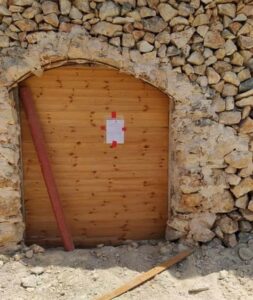 A demolition notice placed on one of the doors of Farasin village.