The structures are commercial shops that constitute the main source of income for some 60 Palestinian families. The demolition took place under the pretext that they lacked the impossible to obtain Israeli issued building permits. After the occupation forces notified the owners of over 20 shops yesterday of their intention to demolish, Palestinian owners evacuated their stores last night to minimise their losses.

Since the beginning of 2018, the UN OCHA has documented125 Palestinian owned structures demolished in occupied East Jerusalem.

This incident is believed to be the largest demolition operation by the occupation authorities since the establishment of the camp by UNRWA in 1965. Shuafat refugee camp is located on the West Bank side of the Separation Wall and is home to some 24,000 Palestinians.

5,000 Palestinian homes have been demolished by #Israeli occupation forces in #EastJerusalem since 1967

AL-QUDS, PALESTINOW.COM — Palestinian Muslims on Tuesday marked the anniversary of the birth of Prophet Muhammad at the Al-Aqsa Mosque in East Jerusalem.

Hundreds took part in the celebration, which was organized by Jerusalem’s Jordan-run Religious Endowments Authority.

The celebration was overseen by Youssef Abu Sneineh, the imam (preacher) of the Al-Aqsa Mosque compound.

Muslims around the world mark the Prophet’s birthday on the 12th day of Rabi al-Awwal, the third month on the Islamic calendar.

The day is a public holiday in several Muslim-majority countries, including Pakistan, Indonesia, Malaysia, Bangladesh and Palestine and in some parts of India.

Prophet Muhammad passed away at the age of 63 — on the same day as his birth — in the city of Medina in the year 632 AD.

Speaking before hundreds of ambassadors and attaches, extremist Shaked says ‘differences between Israelis and Palestinians are too great’

Speaking before hundreds of ambassadors and attaches at the Jerusalem Post Diplomats’ Conference in Jerusalem, Shaked added that the differences between Israelis and Palestinians are too great.

“I want peace like everyone else,” she said, “but I do not believe an agreement can be reached. I would tell Trump: ‘Do not waste your time.'”

Shaked also spoke about the demand made by her party, the Jewish Home, to appoint party leader Naftali Bennett as defence minister – an ultimatum that threatened the stability of Israeli Prime Minister Benjamin Netanyahu’s government.

“The prime minister needs a strong defense minister at his side,” she said. “Unfortunately, he thought otherwise. We are a strong country and Hamas is just a terror organization. But in recent years we’ve lost our deterrence.”

On Gaza, Shaked predicted the cease-fire will only last a few months, and then, “there will be no choice but to fight Hamas with all means.”

Earlier at the conference, Strategic Affair minister Gilad Erdan said Israel is “closer than ever” to controlling parts or all of Gaza.

Erdan said that “moving from defense to offense against Hamas means targeted assassinations of leaders of Hamas’ military wing”.

This, Erdan said, “means being ready to take control of the Gaza Strip and hold it until we dismantle the terrorist infrastructure, Today we are closer than ever – since the devastating disengagement plan – to having to control parts of the Strip, or all of it.”

The woman, Yaqeen Hayek, holds a West Bank ID card but lives with her husband in Gaza. Her husband has previously been held in Israeli occupation jails and was deported from West Bank to Gaza as a condition of his release years ago.

Yaqeen travelled from the Gaza Strip to Egypt and then flew to Jordan to cross into the occupied West Bank through the Allenby crossing to see her family. She last visited West Bank four years ago to give birth to her daughter.

Israeli occupation forces have previously banned her from leaving the Gaza Strip for three years.

Seven-months pregnant, Yaqeen was travelling with her two and four-year-old daughters when she was stopped by Jordanian authorities. Human rights NGO the Arab Federation for Human Rights said her family is calling on Jordan to stop this arbitrary procedure.

Authorities gave no reason for their refusal.

Israel detained 908 Palestinian children since the beginning of 2018, according to Palestinian Prisoners’ Society (PPS).

PPS said in a statement yesterday that of the 908 Palestinian children detained since January to the end of October, 270 are still held in detention in various Israeli prisons.

Children are usually detained in the middle of the night from their homes, they are often beaten severely and threatened in order to get them to sign confessions. Many report being denied an education, family visits and medical attention.

PPS stressed Israel has enacted several laws since 2015 targeting Palestinian children in particular that would allow detention and trial of minors at age 14 years and prison sentences of more than ten years or life terms for those found to have thrown rocks at illegal settlers or occupation forces.

According to prisoners’ rights group Addameer, there are 5,580 Palestinian prisoners being held in Israeli prisons, of whom 250 are child prisoners and 35 are under the age of 16 years.

#Israel arrested more than 600 Palestinians in May

MEMO #Infographic by The White Canvas

The Israeli army this morning arrested a member of the Palestinian Legislative Council from the occupied West Bank city of Al-Bireh, according to local witnesses.

Witnesses told the Anadolu Agency that an Israeli military force raided and searched the home of Palestinian MP Ahmad Attoun before arresting him.

The army, they added, also confiscated computers and mobile phones from Attoun’s residence.

The last time Palestinian legislative elections were held in 2006, Attoun – who represents Hamas – was elected for the city of Jerusalem.

READ: Israel is afraid of Khalida Jarrar because she shatters its false democratic image

Five years later in 2011, Israeli authorities deported him to the occupied West Bank city of Ramallah.

Israeli forces detained nine Palestinians in overnight raids carried out across the West Bank, according to an Israeli army statement.

The individuals were arrested for “suspected involvement in popular terrorist activities”, the statement reads, without elaborating on the nature of said “activities”.

According to Palestinian figures, some 6,500 Palestinians are currently languishing in Israeli detention facilities, including scores of women and hundreds of minors.

A Palestinian lawmaker has called on Tuesday to expel Israel from the International Federation of Journalists (IFJ) for targeting Palestinian media headquarters.

“Israel has committed a crime against international laws and the Geneva Conventions by destroying the headquarters of the Al-Aqsa TV channel” Hamas’s deputy in the Gaza Strip, Ahmed Bahar told reporters in Gaza.

Bahr stressed that Israel’s attempts to “silence the free voice of the resistance will fail and the Al-Aqsa channel will rise again with a louder voice to resist the occupation and expose its crimes”.

The press conference was held on the rubbles of the channel’s headquarter which was destroyed by Israeli warplanes on November, 12th during a recent round of tension with the Palestinian factions in the Gaza Strip.

During the conference, a local and international donation campaign was launched to rebuild the channel’s headquarters.

This is the third time that Israel destroys the channel’s headquarters under the pretext of inciting to violence.

21 NOV10:38 AM Israeli soldiers and police officers started, on Wednesday morning, the demolition of many stores in Shu’fat refugee camp, north of occupied East Jerusalem. Nasser Fasfous, the spokesperson of Fateh Movement in Shu’fat, said dozens of soldiers, officers and employees of the City Council in occupied Jerusalem, stormed the refugee camp, and initiated the demolition of the stores. He added that the stores include a bakery, clothing shops, shoe stores, shops and restaurants, were built in 2007, and City Council in occupied Jerusalem is claiming they did not receive construction permits. It is worth mentioning that the army only posted the demolition orders, on Tuesday evening, after invading the refugee camp. Updated From: Israel Issues Demolition Orders Against 20 Stores In North Jerusalem IMEMC News – Nov 21, 2018 @ 06:05 The Israeli Authorities issued, on Tuesday evening, demolition orders targeting twenty stores in Shu’fat refugee camp, north of occupied East Jerusalem. Dozens of soldiers, undercover forces and members of “City Council” in occupied Jerusalem, invaded the refugee camp, and handed the orders, informing the Palestinians that they have twelve hours to carry out the demolitions. Store owners said their shops were built more than ten years ago, and added that Israel is targeting the only source of livelihood to them and their families. Dozens of Palestinians protested the invasion into the refugee camp, while the soldiers fired gas bombs, rubber-coated steel bullets and concussion grenades. The demolition of homes and property is an illegal act of collective punishment. This is in addition to the fact that refugee camps are supposed to be under United Nations supervision and administration; therefore, attacks against them do not only target the civilians, who are supposed to be protected under International Law, but also against the UN itself and the refugee camps it serves. (Source / 21.11.2018) 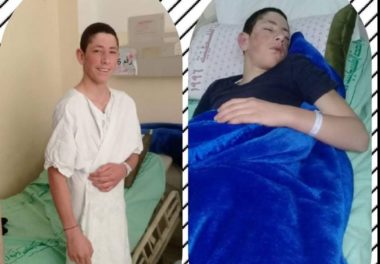 Several Israeli military jeeps invaded, on Wednesday at dawn, Beit Fajjar town, south of the West Bank city of Bethlehem, and abducted two teenage boys from their homes, including one who is recovering from surgery.

Media sources said the soldiers invaded and violently searched homes in the town, after surrounding it, and interrogated many Palestinians while inspecting their ID cards.

It is worth mentioning that Amir underwent a surgery just two days earlier, and was still recovering at home when the soldiers abducted him.

Beit Fajjar has been subject to ongoing invasions, which also include the violent searches of homes, and the abduction of many young Palestinian men.

Video By: Eye On Beit Fajjar 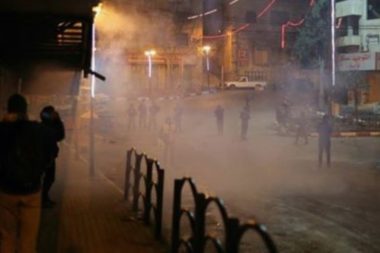 Dozens of Israeli soldiers invaded, on Wednesday at dawn, scores of Palestinian homes and shops in Deir al-Ghosoun town, north of the northern West Bank city of Tulkarem, after detonating their doors, and fired many flares, gas bombs and concussion grenades in several neighborhoods and alleys.

Locals in the town said the invasion was carried out by more than 30 armored Israeli military vehicles, before the soldiers were heavily deployed in various alleys and neighborhoods.

They added that the soldiers detonated the front doors of dozens of homes and stores in the town, before invading them, and initiated extensive and violent searches, leading to further destruction.

The invasions targeted more than fifty homes and stores, while the soldiers also distributed leaflets warning severe punishment, including demolition of property and homes and threatening extended prison sentences against any Palestinian who provides aid to Ashraf Na’alwa.

The soldiers also carried out extensive and violent searches in Bal’a and Ramin towns, east of Tulkarem, in addition to Zeita town, north of the city, including the surrounding farmlands and hills.

Since Na’alwa carried out the fatal shooting in Burkan illegal colony, killing two Israelis, identified as Kim Levengrond Yehezkel, 28, from Rosh HaAyin, and Ziv Hagbi, 35, from Rishon LeZion, and fled the scene, the military started ongoing invasions into his home, and the homes of his relatives along with dozens of homes and property.

The army also frequently abducted and imprisoned members of Ashraf’s family, and issued a demolition order targeting his parent’s home.