The targeted home is located near the main access road between Nablus and Jenin.

Local sources said the Israeli settlers were residents of the illegal Homesh settlement, built on Palestinian lands and supposedly evacuated some 13 years ago.

The paper said that it was “the first public statement by an Israeli official that called on the [Israeli] government to use its power to shut down the agency that services Palestinian refugees.”

Barakat said: “UNRWA is a foreign and unnecessary organisation that has failed miserably. I intend to expel it from Jerusalem.”

He was speaking at a conference sponsored by Channel 2 held in Jerusalem. He said he had already instructed his municipal staff to come up with a plan to replace UNRWA.

He said that the UNRWA offers services to thousands of Palestinian refugees in East Jerusalem, running schools, health centres and aid distribution programmes. 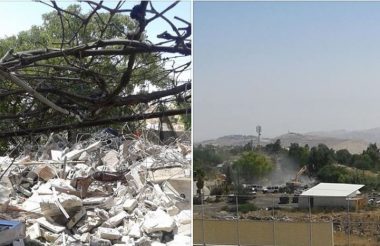 Media sources said dozens of soldiers, accompanied by bulldozers, surrounded Fheidat neighborhood in Anata town, and completely isolated it, before invading it.

They added that the soldiers then demolished a home, owned by Saleh Fheidat, where he lived along with his family of five.

The soldiers also demolished a barn owned by Mohammad Saray’a. The Israeli army claims the demolished buildings were constructed without permits. 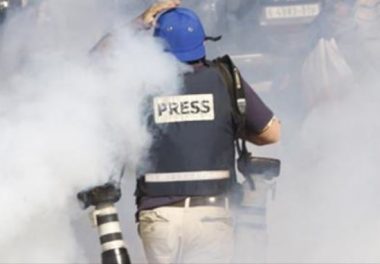 Israeli soldiers resorted, Tuesday, to the excessive use of force against Palestinian journalists, holding a nonviolent protest near Ofer military base and prison, west of the central West Bank city of Ramallah, demanding the release of their colleague Ali Dar Ali.

The soldiers fired gas bombs and concussion grenades at the Palestinian journalists, causing many to suffer the effects of teargas inhalation, in addition to assaulting several reporters.

It is worth mentioning that Ali Dar Ali was abducted by the army on August 15th, after the soldiers stormed and ransacked his home in Burham village, northwest of Ramallah.

His abduction was part of repeated Israeli violations against the media and journalists in occupied Palestine, especially since the soldiers carried out 31 violations in July alone. 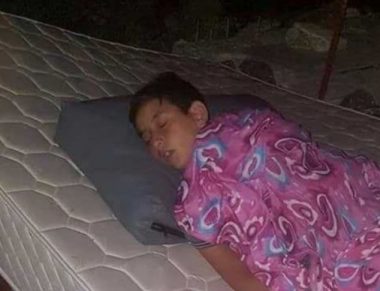 Waleed Assaf, the head of the National Commission against the Israeli Annexation Wall and Colonies, said that the al-Walaja village, west of Bethlehem, is still facing the Israeli demolition of 189 of its homes.

Speaking to the Palestinian Radio on Tuesday morning, Assaf said the demolitions are part of a large illegal colonialist plan to expand its colonies in the southern part of occupied Jerusalem, and link them with Gush Etzion Block.

His statement came after the army demolished, on Monday at dawn, four Palestinian homes in the village, after an Israeli court rendered its final ruling against them.

He added that the families of the demolished homes are now living in tents, and received some basic aid to survive until a solution is found to ease their plights.

Several months ago, the Jerusalem City Council announced the annexation of large areas of Palestinian lands, in order to build and expand its illegally segregated colonies.

This illegal policy places an imminent threat of demolition of 189 Palestinians homes in the village.

A candidate for the next head of Israel’s military declared yesterday that the political divisions amongst Palestinians is a significant advantage for Israel, reported Arutz Sheva.

Former deputy Chief of Staff Major General Yair Golan made the remarks at a conference of the International Institute for Counter-Terrorism in Herzliya.

Addressing the “challenge” posed by the Palestinians, Golan told the audience: “Our strength is in their lack of unity”, adding that the “lack of unity” also makes it “difficult to reach a stable and long-term agreement”.

Read: There is a bitter legacy in Israel on its Gaza evacuation anniversary

Discussing “Israel’s security challenges” more broadly, Golan said: “There is no choice but to build up a force that will enable us, when the conditions are ripe, to strike our enemies with a severe and decisive blow, at their fighting ability.”

He added: “Without such a crushing force, we will find it difficult to provide the citizens of Israel with the security they expect.”

Informed Western sources have revealed that the Palestinian Authority based in the occupied West Bank has rejected an offer by Qatar to pay for the sole electricity plant in the Gaza Strip for six months, Middle East Affairs said last week.

According to the sources, PA President Mahmoud Abbas approved the offer in principle, but then rejected it amidst fears caused by the ongoing truce talks brokered by Qatar and the UN. Apparently the government in Doha also offered to pay the salaries of public sector workers recruited while Hamas governed in Gaza, but the PA rejected that as well.

Trying to justify Abbas’s rejection, a member of the PLO Executive Committee, Ahmed Majdalani, claimed that the US is trying to fill the void with Hamas following the PA President’s distancing of himself from Washington. This, he alleged, is part of the “deal of the century”.

“There is an exposed American attempt to implement the deal of the century in the Gaza Strip under the disguise of a humanitarian project and truce deals,” said the PLO official.

According to members of the Fatah movement loyal to Mohamad Dahlan, and the Democratic Front for the Liberation of Palestine, however, the rejection of the Qatari offers is part of Abbas’s efforts to tighten the siege imposed on Gaza.

The Palestinian political system is “quickly deteriotating” as a result of the Palestinian Authority’s authoritarian regime which “only serves the interests of its leaders”, a senior member of the Democratic Front for the Liberation of Palestine (DFLP) said yesterday.

The Shehab News Agency reported Nayif Hawatmah saying: “Taking the [Palestinian Liberation Organisation] PLO and the national cause out of the political crisis, which was the result of the Oslo process, will remain on top of the DFLP’s agenda and that of the other national, democratic and liberal movements.”

OPINION: Palestinian popular resistance must be free of PA impositions

He also said that it is “impossible” for the PLO to stick to the Oslo Agreement and face the “deal of the century” at the same time.

Hawatmah noted that the “deal of the century” aims to make geopolitical changes in the whole region; therefore, all the Arab parties must stand up against it. The entrance of the International Criminal Court (ICC) is seen in The Hague, Netherlands March 3, 2011

A group of Jewish farmers living in Israeli towns bordering the Gaza Strip traveled to The Hague in the Netherlands on Monday to file a complaint with the International Criminal Court (ICC) against the “Hamas” leadership.

They demanded “Hamas” to pay financial compensation over the torching of thousands of acres of farmland in recent months from incendiary kites and balloons.

A delegation of about 20 farmers arrived in The Hague to hand over the drafted complaint to the court.

Members of the delegation confirmed that they were speaking on behalf of about 50,000 farmers, whose products and fields had been damaged by fires over the past five months.

The complaint was drafted by Israeli legal group Shurat HaDin, whose president Nitsana Darshan-Leitner said in a statement that the existing security reality in which fields and forests in Israel are being burned every day by activists from “Hamas” is “unacceptable.”

The lawsuit was filed against “Hamas” officials, including its leader Ismail Haniyeh, his deputy Saleh al-Arouri, the movement’s former chief, Khaled Meshaal, its head in the Gaza Strip, Yahya al-Sinwar, and several others.

Along with the complaint, the group protested on Monday outside ICC offices accompanied by a photo exhibit of fields destroyed by the incendiary kites and damage done by mortars and rockets.

This is the first lawsuit of its kind submitted to the ICC from the Israeli side.

According to the plaintiffs, the firing of incendiary kites and balloons towards the settlement areas in the outskirts of the enclave led to burning around 30,000 dunums of cultivated land, causing millions of dollars of damage as well as health and psychological damage.

“What they are trying to do is to burn us, not just our fields. It’s a war crime and a crime against humanity,” farmer Ofer Lieberman said ahead of his arrival at The Hague.

“The lawsuit was prepared in the light of several violations of the Rome Statute, including burning fields by incendiary kites, attacking Israeli borders, using children for combat purposes and civilians as human shields,” Lieberman added.

A secret plan to move the British embassy from Tel Aviv to Jerusalem is in place according to former UK diplomat Craig Murray.

Citing an unnamed source, Murray said that the Foreign and Commonwealth Office (FCO) has carried out “secret contingency planning for a post Brexit move to Jerusalem”. The plan has not been announced because of its controversy but it is thought that it may be implemented if the UK decides to leave the European Union.

Murray explained that the UK is bound by a common position under EU common foreign policy so until Brexit the official line is that the UK is not considering moving its Embassy.

Reasons for wanting the move is said to be “partly ideological, and partly to sweeten relationships with the USA in seeking a trade deal”.

Expressing his own observation about the plan he said: “The Tories probably think this would cause more trouble between Corbyn and the Parliamentary Labour Party, and that the Westminster classes are totally out of touch with real public opinion on Palestine, as they seldom meet anybody who does not share their extreme Zionism.”

Murray revealed that information regarding the secret plan came to him via an unknown FCO source. Unable to guarantee the full reliability of the source, Murray said he had contacted the FCO Press Department to confirm the story.

Commenting on the Foreign Office’s failure to respond to his query, Murray said: “If this is nonsense, it would have taken the FCO two minutes just to tell me so.”

OPINION: The US embassy move will embolden Israel to colonise Jerusalem

In his email to the FCO, Murray informed its media staff that he was asking a specific question regarding any preliminary study that may have been conducted or is being conducted, while pointing out that a generic response to his query such as “there are no plans to move the embassy” would be insufficient as an answer.

MEMO contacted the FCO also asking specifically if the UK had conducted or is conducting a post-Brexit contingency plan to move the embassy and was told that the “the British Embassy to Israel is based in Tel Aviv and we have no plans to move it”.