People gather around a heavily damaged building after Saudi-led coalition’s air strikes over Arhab District of Sanaa, Yemen on 23 August, 2017

The international NGO Doctors Without Borders warned in a statement yesterday that one of its cholera treatment clinics was hit by a Saudi-led coalition air strike.

The centre was based in Abs, and attacked at approximately 5:40am local time, although no staff or patients were killed or injured. The clinic was based one kilometre from the MSF-backed Abd Rural Hospital, which serves a population of more than one million people.

The air strike “by the Saudi and Emirati-led coalition (SELC) shows complete disrespect for medical facilities and patients. Whether intentional or a result of negligence, it is totally unacceptable. The compound was clearly marked as a health facility and its coordinates were shared with the SELC,” João Martins, MSF’s head of mission in Yemen, said in a statement.

“With only half of health facilities in Yemen fully functional, nearly 10 million people in acute need, and an anticipated outbreak of cholera, the CTC had been built to save lives. MSF has temporarily frozen its activities in Abs until the safety of its staff and patients is guaranteed”, Martins continued. 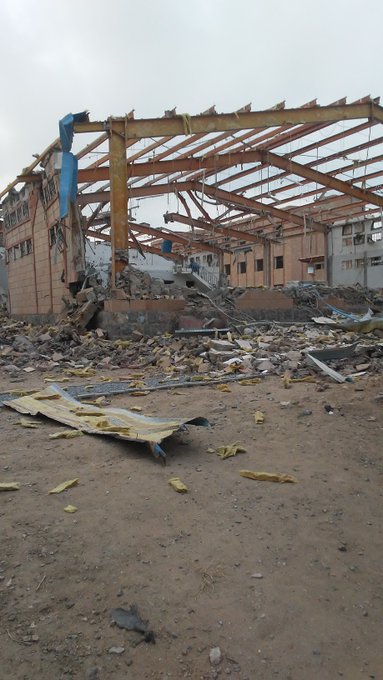 #MSF has temporarily frozen its activities in #Abs #Yemen until we guarantee the safety of our staff and patients.”¨João Martins, MSF’s Head of Mission #Yemen

The Yemen war intensified when the Saudi-led coalition was invited to launch a military air campaign in March 2015. Since then, Yemen has remained in a stalemate with the Houthi group controlling large swathes of territory from Sana’a to Saada governorate.

Read: Saudi-led coalition assault on Yemen port would be disaster

Last Thursday, the International Committee of the Red Cross (ICRC) pulled out 71 employeesfrom Yemen over security concerns amid the pending assault on the port city of Hudaydah. Some 450 ICRC employees remain in Yemen, engaging in humanitarian aid work. In addition, the United Nations has evacuated its staff fearing a brutal attack led by the United Arab Emirates.

The UN Yemen mediator Martin Griffiths has been holding talks with the Houthis in an effort to have the port placed in the UN’s hands. To add pressure, the UAE provided a timeframe of 48 hours to allow the negotiations to occur, which lapses by end of play today.

U.N. Pulls Out of City in Yemen, Fearing Bloody Assault by Arab Coalition

Diplomats say the United Arab Emirates and Saudi Arabia will lead an attack on Al Hudaydah, a rebel-held port that is an entry point for humanitarian aid.

Three years after the Saudi-led coalition entered the conflict, Yemen has witnessed more than 10,000 deaths according to the United Nations and civilians remain trapped in the middle of the cross fire, with dwindling supplies of basic amenities and a lack of access to sufficient water, sanitation and food.