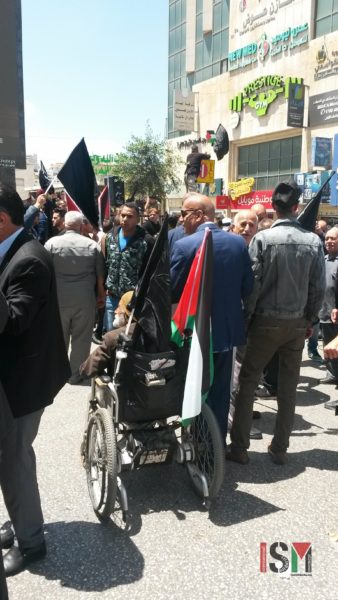 On Monday 14th May at 11am, protesters in occupied Al-Khalil gathered at the Hussein Mosque stadium with placards, and marched down to the city centre, gathering there and taking pictures at around 11.30. Around 80 protesters were present, including children and observers. Some protesters continued on towards Checkpoint 56, which prevents Palestinians from entering Shuhada Street. Israeli soldiers threw stun grenades and tear gas at protesters from a rooftop above the checkpoint. The protesters were mostly under 18, and not armed or posing any threat to the soldiers. At this point, 5 heavily armed soldiers came out of the checkpoint into Bab-Azawieh, in H1, began pointing out protesters, and firing rubber-coated steel bullets towards them as well as tear gas and stun grenades. Other soldiers remained on the rooftop, using live ammunition on protesters. 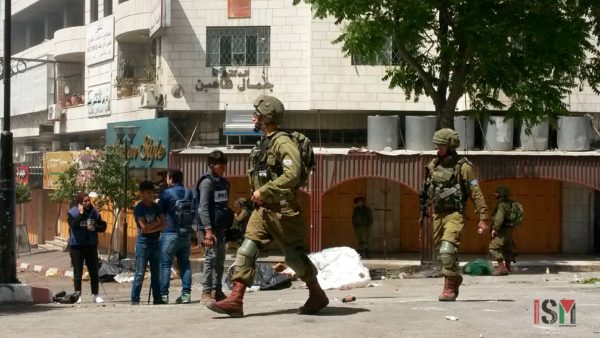 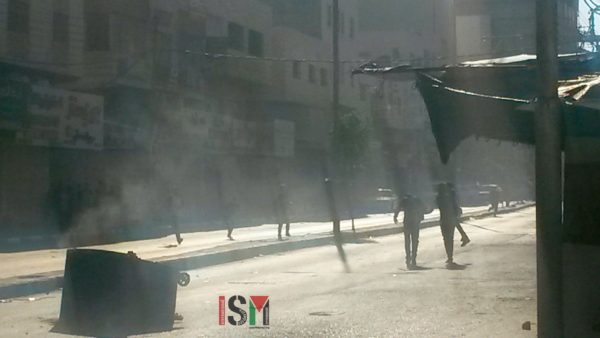 International Solidarity Movement activists went to investigate if there had been any injuries amongst the protesters, and witnessed an elderly man being carried down the street away from the checkpoint and rushed into an ambulance, suffering with tear gas inhalation. In the next few hours, International Solidarity Movement activists confirmed with witnesses that three boys were shot and injured– one from live fire, and two from rubber-coated steel bullets. The victims were taken to hospital. Copious amounts of tear gas continued to be used throughout the day from soldiers occupying a rooftop above Checkpoint 56, injuring a 14 year old boy, from inhalation, who was filming for a human rights organisation and wearing a vest marked ‘Press’.  Activists also witnessed the soldiers on the rooftop dancing, singing, and jeering at protesters after throwing tear gas and stun grenades, and after hospitalising 4 Palestinians. One protester, aged around 12 or 13, waved a ‘Great Return March’ flag in view of soldiers, who responded by throwing tear gas and stun grenades. 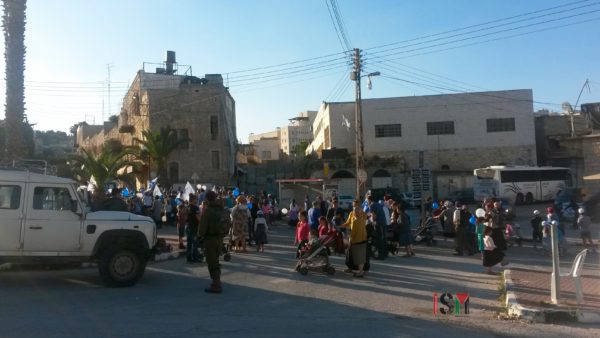 As soldiers remained on the rooftop, International Solidarity Movement activists passed through Checkpoint 56 after receiving reports of settlers having a party. Settlers, including many children, escorted by heavily armed soldiers, police and border police, were having a party with music and balloons. The party stopped near the Beit Hadassah settlement on Shuhada street. ISM activists witnessed a settler with a rifle slung over his shoulder handing out balloons to children. Israeli police checked the activists’ passports, and they were asked to leave.

Palestinians were protesting for many reasons on this day: including the commemoration of the nakba, or catastrophe, in which much of 1948 Palestine was ethnically cleansed, and the opening of the US embassy in the occupied and contested city of Jerusalem. In protests in Gaza on the same day Israeli forces shot dead 55 unarmed Palestinian protesters.