The Israeli-controlled Jerusalem municipality on Tuesday notified the demolition of a number of Palestinian houses in Silwan town south of al-Aqsa Mosque.

Wafa reported that crews from the Jerusalem municipality, escorted by a police force, stormed Silwan and distributed orders to demolish Palestinian houses in the town for allegedly being unauthorized.

The municipality on 18th March forced the family of the Palestinian citizen Ishaq al-Shweiki to demolish their own house in al-Abbasiya neighborhood in Silwan under the pretext of being built without license.

Jerusalem municipality’s bulldozers on 6th March demolished a car wash in the city under the same allegation.

Palestinian Authority (PA) security forces on Wednesday apprehended 18 Palestinians mainly ex-detainees and university students bringing the number of political detainees who were arrested within the last ten days only to 60.

The arrests came in line with the PA’s continuous campaign against members and supporters of Hamas Movement in the West Bank.

The arrests were carried out in different governorates of the West Bank including al-Khalil, Nablus, Occupied Jerusalem, Qalqilya and Tubas.

Israeli military tanks on Wednesday carried out a series of attacks on the borderline area in the eastern besieged Gaza Strip, said local sources.

The sources stated that Israeli artillery attacked two resistance sites in east of al-Zaytoun neighborhood in Gaza city and that no casualties were reported.

0404 Israeli website said that both Palestinians could return to Gaza safe and sound after torching the engineering equipment, and claimed that the Israeli strike came in response to that.

Eyewitnesses told the PIC reporter that two Israeli patrols came to the site and IOF soldiers installed barbed wire tens of meters west of the military site in anticipation for the massive march of return slated to be held on Friday.

Nazir al-Hakim, Secretary-General of the Syrian Coalition, called on the United Nations to turn its words into deeds and to achieve justice in Syria by holding Bashar al-Assad and all war criminals who committed war crimes and crimes against humanity accountable.

Hakim said that the latest remarks by the UN Secretary-General Antonio Guterres have been repeated numerous times without taking any action to achieve tangible change or deter the war criminals. “We hope that these words will be turned into deeds and will not remain mere threats.”

Hakim stressed that the diplomatic approach has proved ineffective as the Assad regime continues to openly flout international law and international humanitarian law with Russian direct support. He stressed the need for the UN Security Council member states to unite against Russia and take serious measures towards the implementation of UN resolutions 2401. The resolution demanded a 30-day ceasefire, the lifting of the sieges on, the delivery of humanitarian aid to those in need, the release of detainees, and the pushing of the political process ahead to establish a transitional governing body with full powers.

Hakim also underscored the need to activate Chapter VII of the UN Charter to implement international resolutions in Syria. He said that this is the only solution to save the lives of thousands of civilian victims and avert an uncertain future for children in light of the continued military campaigns by the Assad regime.

Hakim pointed out that the Coalition stands ready to cooperate with all United Nations bodies to provide all the necessary evidence for the prosecution of war criminals in Syria. He stressed that the international community should not remain silent about the repeated crimes against Syrian civilians.

Israeli settlement activities encouraged by the American administration and its embassy in Tel Aviv are escalated as the “Regional Committee for Israeli Organization and Building in Jerusalem” is considering the expansion of the “Nof Zahav” settlement in Jabal Mukaber under the project no. 365908, which requires the construction of 600 new settlement units to be added to the 350 planned ones under the same 2017 project, where new sections have been added and expanded under the pressure of investors and settlers in light of the green light following the ill-famed Trump’s declaration

This comes in conjunction with the issuance of the Israeli Minister of Finance, Moshe Kahlon, an order to exempt fees of the infrastructure required to transfer the US Embassy to Jerusalem. When he signed the order, Kahlon said that as a Finance Minister and responsible for planning in Israel, I am proud to pay for the transfer of the US embassy to Jerusalem..” He had published that the transfer of the embassy on May 14 might not be possible due to the bureaucratic procedures.

In a remarkable development, the Regaim Settlement Association submitted a petition to the Israeli Supreme Court demanding the evacuation of 3 Palestinian Bedouin communities south of Hebron in the occupied West Bank. They handed over a copy of the petition that consists of 25 pages to the citizens, the 7th item of it stated that this area is classified as a shooting zone and that the Palestinian Bedouins have built it illegally, worth mentioning that the area has about 1,600 buildings, but classified as C Area i.e. under Israeli control.

On another level, the United Nations stated in a new report issued by its mission in Palestine that the weekly rate of settler attacks that resulted in injuries to Palestinians or damage to their property has increased by 50% since the beginning of 2018 compared with 2017, 67%.

As part of Israel’s ongoing war against the Palestinian people, the Facebook administration responded to a request by Israel to amend the map of Jerusalem to include settlement outposts set up by the occupation after 1967. Deputy Foreign Minister, Tzipi Hutibli submitted a request to the Government Relations Officer Erdina Kotler, who responded to the request. For her part, Israeli Justice Minister, Ilit Shaked threatened to take legal action against Twitter for refusing to respond to Israeli requests to write off the accounts of Palestinian organizations that the Israeli government accuses of being hostile.

Israel’s expansionist ambitions for the West Bank are not limited to the Golan Heights. A recent political conference entitled “Observations of a National Strategy on the Golan Heights” was presented at a conference in Tel Aviv. For the first time in fifty years, there is a possibility of changing the borders in the Middle East. Israel has an opportunity to gain recognition of its sovereignty over the Golan Heights. He added, Israel should look forward to an international understanding to cancel the 1967 lines.

The National Office condemned Ambassador Friedman’s remarks in calling for the annexation of the West Bank, specifically, the C areas, which are actually accompanied by practical measures on the ground of which is the most recent call by Israeli Minister of Construction and Housing, Yoav Galant to annex the West Bank and the Jordan Valley to Israel. He said during his meeting last weekend with the heads of the West Bank settlement council that his ministry had doubled the funds allocated for the escalation of settlement construction, adding that the maximum political settlement of our conflict with the Palestinians is to give them “self-government”.

The Israeli Occupation Forces (IOF) detained a 4-year-old child at a military checkpoint for allegedly having “a sharp tool” in his possession.

The PIC field reporter affirmed that the child Mohamed Abu Asnina was detained at Abu al-Rish checkpoint near the Ibrahimi Mosque in al-Khalil for holding a household item he borrowed for his mother from their neighbors.

The child was released an hour later after his older brothers intervened at the scene.

Meanwhile, the IOF blocked the access of a number of Palestinian teachers to their school.

Noura Nassar, Qurtoba school’s director, told PIC reporter that the teachers, all women, were heading to the Qurtoba school in the Old City when Israeli soldiers stationed at a military checkpoint on Al-Shuhada Street prevented them from passing through.

B’Tselem organization on Tuesday launched a petition to foil an Israeli plan to displace thousands of Palestinians who live in about 200 communities in Area C in the West Bank.

B’Tselem said in a report, “It’s happening right now and every day. Israel is trying to displace thousands of Palestinians who live in about 200 farming-shepherding communities in Area C of the West Bank. Dozens of these communities face imminent expulsion, and others are subject to various forms of abuse, violence and dispossession.”

The organization affirmed that Israel’s goal is to establish as many facts on the ground as possible in order to make more land available for settlements.

The report noted that Israel is focusing its military campaign on three areas in the West Bank.

The first area is located south of al-Khalil mountains. Nearly 1,000 people, about half of whom are minors, live in this area. The Israeli army began transferring out local residents in late 1999 arguing that the land had been declared a “firing zone” since the 1980s.

The Second area is Ma’ale Adumim. In the 1980s and 1990s Israel expelled hundreds of Bedouins of the Jahalin tribe in order to establish and later expand the settlement of Ma’ale Adumim. The Palestinians were transferred to a permanent site created for them near Abu Dis garbage dump losing access to the farmlands that were their livelihood.

Now, the report said, another 3,000 local residents are facing imminent expulsion. This number includes about 1,400 who live in an area that Israel has designated E1 and earmarked for expanding Ma’ale Adumim to create a contiguous urban bloc between the settlement and East Jerusalem.

The third area is Jordan Valley. About 2,700 Palestinians live in this area in about 20 shepherding communities. The Israeli army has declared much of these communities “firing zones” and regularly conducts training exercises near them. Residents in some communities are repeatedly forced to evacuate their homes so soldiers can train nearby.

Many Palestinians in Bethlehem suffered breathing problems after Israeli occupation forces (IOF) quelled a peaceful march demanding the return of the bodies of Palestinian martyrs held in Israeli jails.

The participants in the march carried photos of martyrs and Palestinian flags while heading to the northern entrance to Bethlehem in the southern West Bank.

Many of the protesters choked on tear gas as IOF soldiers fired tear gas grenades directly towards the participants.

Several human rights organizations held such events across the West Bank in order to pressure Israeli occupation authorities for returning martyrs’ bodies to their families.

Another similar event was staged before the headquarters of International Committee of the Red Cross in al-Khalil where Palestinian speakers stressed the importance to exert serious efforts in this regard through activating the role of international human rights organizations. 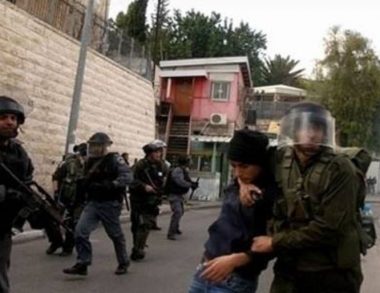 Israeli soldiers abducted, on Wednesday at dawn, three Palestinians, including a former political prisoner, from their homes in the West Bank governorates of Hebron and Tubas, and installed roadblocks.

The Hebron office of the Palestinian Prisoners’ Society (PPS, in southern West Bank, said the soldiers abducted Ali Ibrahim Abu ‘Oleyyan, after storming his home and violently searching it, in Yatta town, south of Hebron, in the southern part of the West Bank.

The soldiers also invaded and searched several homes in Halhoul town, north of Hebron, and interrogated many Palestinians.

In addition, the army installed military roadblocks at the entrances of southern Hebron, and surrounding towns, in addition to the al-Fawwar refugee camp, before searching many cars, and interrogated several Palestinians while inspecting their ID cards.

Also at dawn, the soldiers searched many homes, in northern West Bank communities, and abducted nine Palestinians in Nablus and Tulkarem.

In addition, the soldiers invaded the al-Walaja village, northwest of the West Bank city of Bethlehem, and demolished an under-construction home, walls and destroyed graves. 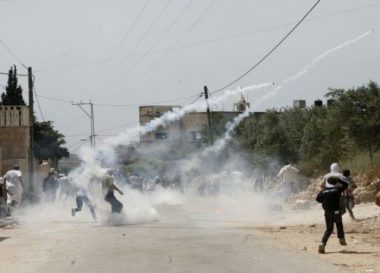 Israeli soldiers injured, Tuesday, many Palestinians, who suffered the severe effects of teargas inhalation, in addition to cuts and bruises, near Abu Dis University, in Abu Dis town, southeast of occupied East Jerusalem.

They added that several young men hurled stones and empty bottles at the invaded army jeeps, while the soldiers fired a barrage of gas bombs.

Dozens of Palestinians suffered the severe effects of teargas inhalation, and receiving the needed treatment, without the need for hospitalization.