Israeli occupation forces (IOF) on Monday morning broke into a Palestinian primary school in al-Khalil, chased the students and fired tear gas grenades before the children.

The PIC reporter said that three IOF patrols raided al-Nahda Primary School in the Old City of al-Khalil at the pretext of searching for students who allegedly threw stones at the military jeeps.

As a result many students suffered breathing problems while others had to flee to the adjacent mountains. Two students, Ali Abu Esnaina and Hassan al-Takrouri were taken to hospital for treatment.

The school, however, was closed earlier than usual as a state of panic prevailed among the children.

“Do not speak Arabic” was a racist order issued recently to Arab workers of an Aroma cafe branch in southern Israel by their manager.

According to Israel’s Channel 2, an Aroma cafe manger in a city south of Israel issued an order prohibiting workers from speaking the Arabic language between them or with Arab customers.

The cafe branch justified its measure by claiming it was aimed at preserving the dignity of the customers who do not understand Arabic.

Following this development, Arab Knesset member Yousef Jabbareen (the Join List) filed a complaint with the Israeli equal employment opportunity commission against the cafe, and asked it to investigate the matter and demand the cafe company to cancel its ban on speaking the Arabic language, describing it as ‘arbitrary and racist.”

Member of the Syrian Coalition’s political committee Hadi al-Bahra stressed the need for the UN Security Council’s member states to take measures to ensure the implementation of Resolution 2401. The Council is set to convene later on Monday to assess the ceasefire and the delivery of humanitarian aid to those in need.

Bahra underscored that the international community is to blame for the current situation in Syria “as it has left the Syrian people alone for seven consecutive years in its struggle against the crimes of the tyrannical regime.”

Bahra pointed out that Iran’s continued pursuit of destructive policies in Syria and the region leading to further spread of terrorism as well as the fueling of sectarian strife and conflicts throughout the region will make it impossible to achieve peace or restore security and stability to the region.

The Iranian regime is the main supporter and partner with the Assad regime, Bahra said, stressing the need to hold it accountable for the crimes the Iranian militias and forces are committing in Syria.

Issa Qaraqe’, the head of the Palestinian Detainees’ Committee, has reported that Administrative Detainees, held by Israel without charges or trial, will start a gradual hunger strike this coming April, demanding basic rights guaranteed by International Law.

Speaking to the Palestinian Radio on Monday morning, Qaraqe said the Administrative Detainees will continue to boycott the Israeli military courts, especially since these courts have predetermined rulings, and neither the detainees, nor their lawyers, can have access to the alleged “secret files” against them.

Qaraqe added that the detainees are determined to continue the boycott of military courts, and to launch their gradual hunger strike, until their legitimate demands of fair and open trials are met, in accordance to all international treaties.

He also said that the Detainees’ Committee would be holding various important activities in support of the detainees and their legitimate demands, including a conference in participation of many lawyers, in addition to legal and human rights organizations, to highlight the illegality of the Israeli system in dealing with the Administrative Detainees, and the serious violations against all political prisoners.

The official stated that Israel has passed many laws “legalizing” the imprisonment of Palestinian children, in addition to the excessively high fines, and added that the “Israeli courts have become another means of collecting money from the Palestinians.”

On February 13th, the Prisoner Support and Human Rights Association (Ad-Dameer) issued a detailed statement on behalf of the Palestinian Administrative Detainees regarding the ongoing and illegal use of this policy in violation of conditions and terms elaborated by international humanitarian law.

Also in February, the Electronic Intifada published an article about the detainees’ boycott of Israel’s military courts, and their decision not to attend the hearings in addition to calling on lawyers and human rights organizations to stay away from these courts as a way to delegitimize the Israeli legal system.

|The boycott started on 15 February, and will last, prisoners say, until Israel ends its practice of administrative detention – the widespread Israeli practice of imprisonment without charge or trial that can be renewed indefinitely,  and which is rooted in British colonial practices.

“The Israeli military and laws are in complete harmony with the occupation’s policies against our people and represent a complete disregard for international norms,” detainees wrote in their statement.

Palestinians who are taken to military court are faced with a near 100 percent conviction rate.|

It is worth mentioning that the Palestinians annually mark April 17th as the Palestinian Prisoners’ Day, and hold various activities in support of the political prisoners and their humanitarian cause. 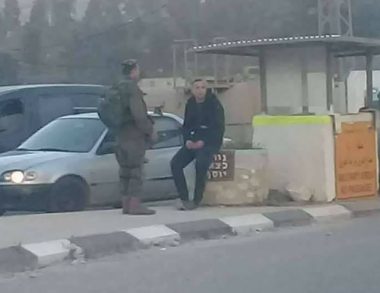 The Nablus office of the Palestinian Prisoners Society (PPS) said the soldiers abducted Nassr Jamal Mabrouka, 24, after stopping him at Huwwara military roadblock, south of the city.

It added that the soldiers cuffed and blindfolded the Palestinian and took him to Huwwara military base.

In addition, dozens of Palestinians suffered the effects of teargas inhalation, after many Israeli army jeeps invaded the town, and fired a barrage of gas bombs at Palestinians, who protested the invasion.

The soldiers also targeted several homes with gas bombs, and flares, in the eastern neighborhood of the town.

Israeli detained three Palestinians, including two brothers, after storming and ransacking their homes in Halhul town, north of Hebron in the southern West Bank.

Forces also raided Ad-Dhahiriya town, southwest of Hebron, where they detained a Palestinian after storming and thoroughly searching his home.

In a subsequent raid into Beit Ummar town, northwest of Hebron, forces ransacked several homes and detained two Palestinians, including a former detainee.

Elsewhere, forces broke into the homes of a former prisoner and the principal of Ruwwad al-Ma’rifa School in Hebron city, wreaking havoc into their contents and seizing sums of cash.

The school principal said that soldiers smashed his children’s money boxes and stole their savings.

In the northern West Bank, Israeli troops detained six Palestinians, including two 17-year-old minors and a 22-year-old cancer patient, after breaking into their family homes

Meanwhile, in Talkarem, forces conducted a raid into Anabta town, east of the city, where they detained two Palestinians.

PPS said another was detained from the northern West Bank district.

Three more Palestinians were detained in predawn raids; two from Jercho district and another from Ramallah.

Sources in Jerusalem said that troops from the Israeli army, police and the so-called border guards, at dawn today stormed the  cemetery, and destroyed the gravestones of a number of graves of Palestinian martyrs from Jerusalem, who were buried in the cemetery.

Fishermen sit together on a fishing boat at a shore in Gaza City, Gaza

Israeli naval forces have arrested ten Palestinian fishermen off the coast of the occupied Gaza Strip, according to various reports this morning.

As well as detaining the fishermen, the Israeli navy also confiscated their three boats.

Attacks by Israeli naval forces on Palestinian fishermen are routine, with Israeli authorities enforcing a unilaterally-imposed “no go” zone that has dealt a severe blow to Gaza’s fishing industry.

Last month, Israeli forces shot and killed a Palestinian fisherman, whose body has yet to be returned to his family for burial.

A group of Israeli settlers attacked Palestinian residents of the southern occupied West Bank village of Al-Tiwani, and attempted to set fire to the village’s mosque, according to locals.

Locals from Al-Tiwani, located in the South Hebron Hills, told Ma’an that a group of 30 settlers from the Maon and Havat Maon settlements raided the village under the protection of Israeli soldiers.

Settlers reportedly threw rocks at Palestinians and their homes, and attempted to set fire to the village mosque, but were stopped by locals.

Jumaa Ribai, a resident of Al-Tiwani, told Ma’an that “yesterday the settlers broke my car and threw stones at my house, and today they are renewing their attack on the village and residents.”

Israeli occupation forces continue to impose movement restrictions on the thousands of Palestinians who live in Hizma, a town in the central West Bank near Jerusalem.

The town has been under a tight form of blockade at the hands of the Israeli occupation authorities for almost two months.

While Israeli authorities have cited alleged stone-throwing by local youths as reason for the restrictions – which, in and of itself, is an admission of collective punishment – local mayor Samar Salahuddin believes there are other factors at play.

The Israelis are looking to “isolate Hizma from its surrounding area,” she added, “because it is an important flank of Jerusalem and the link that connects the north of the West Bank with its south.”

According to Salahuddin, the Israeli closure – especially of the town’s northern entrance – has hit more than 150 local business and store owners hard, leaving them “unable to fulfil their daily and monthly financial obligations towards their workplaces and employees”.

In addition, “the greatest harm has afflicted the students of schools and universities, employees and workers, who leave early for study and work on a daily and regular basis,” she said.

“This closure has become a daily disturbance to them as they pass through checkpoints and concrete blocks, which were placed at the town’s entrances.”

On 24 January, Israeli NGO B’Tselem described Israeli restrictions on Hizma as a form of “collective punishment”, and thus “prohibited under international law”.

“Soldiers have been deployed at all entrances to the village, and physical roadblocks have been put in place barring vehicular access,” B’Tselem noted. “At various points during this time, only registered residents of the village were allowed in, and men under 40 were not allowed out.”

According to the NGO, “this type of occurrence illustrates routine life under occupation and the Israeli military’s arbitrary use of its power in dealing with the Palestinian population.”

Meanwhile, on yesterday evening an Israeli military incursion into the town prompted clashes with local residents. Some 20 Israeli army vehicles raided the community, deploying tear gas and skunk-water. Soldiers also broke into a number of homes and occupied rooftops.