At least 13 Palestinians, mostly ex-prisoners, were arrested by the Palestinian Authority (PA) forces in a West Bank sweep.

A PA patrol, escorted by an ambulance, stormed the home of the Khanfer family and cracked down on women, firing gunshots in the air.

The break-in culminated in the abduction of the two young men Younes and Mohamed Khanfar. PA preventive forces attacked the Palestinian elderly Maher al-Akhras before they arrested him, along with his son, Islam. Young man Ghassan al-Saadi was arrested in the assault.

The PA preventive forces also stormed the home of Naseeb Hekmat and arrested his mother before they released her in an area located five kilometers away from the family home.

Five days earlier, the PA preventive troops in Tubas arrested six Palestinians. The arrestees have been held in Jericho jail.

The PA General Intelligence officers in Ramallah also arrested the student Osama al-Barghouthi, an ex-prisoner, after they summoned him to questioning.

At the same time, the PA intelligence in al-Khalil summoned the ex-prisoner Udai Awawda to questioning for the fourth time in four days. 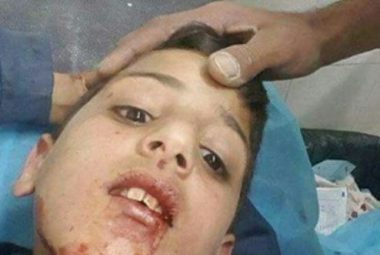 Palestinian medical sources have reported that a child was injured, on Thursday evening, after Israeli soldiers chased him in the southern area of Hebron city, in the southern part of the occupied West Bank.

The sources said the child, Ali Khaled Jolani, 12, fell while the soldiers were chasing him, and suffered a fracture in his left arm, a torn tendon, in addition to cuts and bruises to his face.

Palestinian medics provided the child with first aid, before rushing him to a hospital in Hebron.

In related news, the soldiers invaded and searched many homes in al-‘Arqa village, near the northern West Bank city of Jenin, in addition to invading the at-Tarm area in Ya’bad nearby town.

The soldiers interrogated several Palestinians while searching their homes and inspected their ID cards. 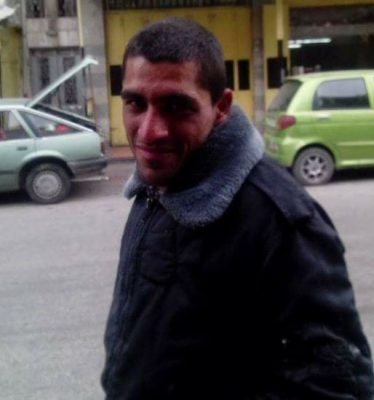 Israeli soldiers shot and killed, on Friday evening, a young Palestinian man who was deaf and could not speak, in the southern West Bank city of Hebron.

Palestinian medical sources said the young man, identified as Mohammad Zein al-Ja’bari, aged 24, was shot by the soldiers with a live round in his chest, in the Bab az-Zawiya area, in the center of Hebron city.

They added that the young man suffered very serious wounds and was rushed to a local hospital, but died from his wounds despite all efforts to save his life.

It is worth mentioning that the young man could not speak or hear. He was shot after the soldiers resorted to the excessive use of force against Palestinian protesters, firing live rounds, rubber-coated steel bullets and gas bombs.

The Israeli army claimed that the soldiers shot the Palestinian while he was allegedly “throwing a Molotov cocktail at them,” and added that it is “investigating the incident.”

It is also worth mentioning that the soldiers attacked Palestinian protesters, including those in participation with Israeli and international peace activists, in several parts of the occupied West Bank, including Jerusalem, and the Gaza Strip, causing many injuries. 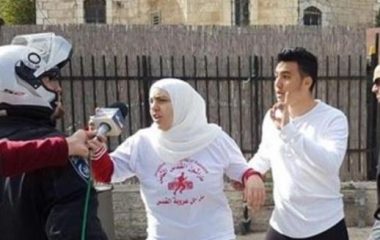 The Israeli police on Friday abducted two young Palestinian men, and confiscated the car of one of them for the ‘crime’ of organizing a Palestinian Marathon in occupied Jerusalem to counter the Marathon the City Council is holding for Israeli colonizers and internationals.

The WAFA Palestinian News Agency said hundreds of soldiers and police officers had deployed in the occupied city on Friday, and closed many main roads, west and east of the city, to prepare for a Marathon.

The Palestinians protested the Israeli marathon because Jerusalem is an occupied city, and such events are only meant to strengthen and normalize the illegal occupation. They decided to organize their own event, but the police prevented them. 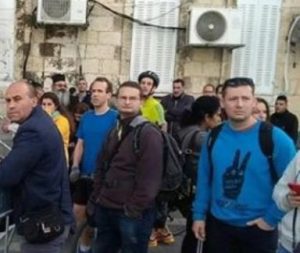 Mohammad Abu al-Hummus, after assaulting him on Nablus Street near Damascus Gate, and confiscated his car along with the Palestinian flags and athletes’ outfits he was transporting. They also abducted Fadi al-Mitwer.

The police and soldiers attacked many Palestinians, who had planned to participate in the Palestinian marathon.

A senior Israeli military official said on Wednesday that the Israeli army is preparing for war on five fronts, in addition to another with Iran.

Deputy Chief of Staff of the Israeli army, Aviv Kochavi, said: “Iran is fuelling many terrorist activities in the Middle East”, adding that the Israeli army continues to grow and prepare for any future military confrontation.

Speaking at the graduation ceremony of navy officers, Kochavi said the army anticipates war on five fronts but he did not name them.

Meanwhile, Commander of the Israeli navy, General Eli Sharvit, said the navy has the ability to work in absolute secrecy, above and below the water which enables it to expand the scope of operations quickly.

Israel is also holding joint military exercises with American troops on its ground this week. About 2,500 US soldiers and 2,000 Israelis are taking part in the drills, which will last for one week, the Sama news agency said.

Jason Greenblatt, US President Donald Trump’s special envoy for the Israeli-Palestinian peace process, has attacked Hamas in an op-ed in the Washington Post, and announced that the White House will soon be “brainstorming” for solutions to the situation in the occupied Gaza Strip.

According to Greenblatt, “in response to the burgeoning humanitarian situation in Gaza, key countries and stakeholders are preparing to act”, placing the blame for the “humanitarian disaster” entirely on “Hamas’ exploitation of the Palestinians of Gaza”.

The envoy referenced a recent meeting in Cairo, and revealed “there will be a brainstorming session at the White House next week to find real solutions to the problems that Hamas has caused”.

The “Gaza conference” in Washington will, Greenblatt said, “focus on ideas for how to develop, over time, a viable economy in Gaza”, taking into account “Egypt’s and Israel’s security concerns”.

Focusing entirely on Hamas, the senior official stated that the Trump administration is committed “to find a path to a brighter future for the Palestinians of Gaza”, who, Greenblatt said, “have the opportunity to reject the failed policies of Hamas”.

Greenblatt’s op-ed failed to mention the status of the Gaza Strip as under Israeli military occupation, as affirmed by the UN Security Council, nor the over decade-long illegal blockade of the territory.

America’s “deal of the century” which is set to bring an end to the 70-year-old Palestinian-Israeli conflict includes setting up airports and ports for Palestinians on Egyptian land and will take 30 years to be fully realised, senior Fatah sources have said.

Speaking to Al-Araby Al-Jadeed, the sources said the plan seeks to establish a fragmented Palestinian state with gradually expanding borderlines that shall include a seaport on the Egyptian coast of Rafah in the area adjacent to the besieged Gaza Strip, in addition to setting up an airport in the same area.

The sources added that the vision, which has been introduced to close circles, starts with the establishment of a free trade area on the border between the Gaza Strip and Egypt, which will be gradually expanded through the buffer zone, which Egypt has taken a long way to expand over the last two years.

The sources added that the vision also includes the establishment of a service area for the Gaza Strip on Egyptian territory, such as the establishment of a giant power station and fuel tanks, financed by Saudi Arabia and the UAE, on condition that a formula would be found to manage these projects, which include an airport, port and service area, under international supervision. The ownership of this area will be then transferred to and gradually introduced within the borders of a Palestinian state, in accordance with the details of the “deal of the century”. This will take years, they added.

On 26 October 2014, Egypt began setting up a buffer zone of about  500 metres in width and 14 kilometres in length along its border with the Gaza Strip to “prevent the flow of terrorists”, after the incident that targeted Egyptian soldiers and killed 33.

Israeli reports have revealed that dismissed Fatah leader Mohammed Dahlan has concluded an agreement with Egypt which would see a power plant being built in Egyptian Rafah funded by the UAE, which will be dedicated to meeting the needs of the Gaza Strip.

Numerous reports have said that Saudi Arabia is applying pressure on Palestinian President Mahmoud Abbas to accept the US’ latest peace deal. The Kingdom’s Neom megaproject is included in the terms of the deal as it includes construction in Sinai and along the Red Sea.

A Palestinian boy has been left blind in one eye, after being shot in the face by an Israeli soldier.

Israeli soldiers had forced a few dozen stone-throwing children back towards a playground, using live ammunition, rubber-coated metal bullets and tear gas, when Mohammed was shot in the face.

As recounted by Levy, Mohammed’s friends helped evacuate him. An ambulance first took him to the Government Hospital in Ramallah, after which he was taken to Rafidia Hospital in Nablus.

Despite receiving further treatment at St. John of Jerusalem Eye Hospital in occupied East Jerusalem, it was not possible to save sight in the eye hit by the bullet.

The Israeli military spokesperson told Haaretz that on the day in question Israeli soldiers responded to a “public disturbance” and “took measures to disperse the demonstration”, adding that the army is “not aware of any claim of a Palestinian being wounded”.