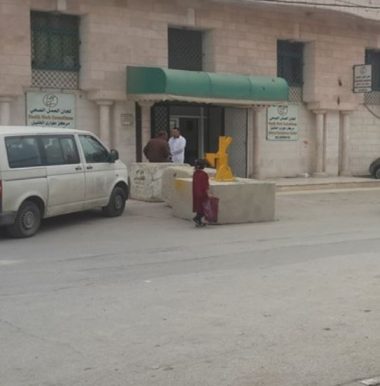 Israeli soldiers invaded, on Wednesday morning, a Palestinian medical center run by the Health Work Committee, near the Ibrahimi Mosque in Hebron, in the southern part of the occupied West Bank, and abducted a child.

The Health Work Committee said the soldiers broke into their center, in the southern area of Hebron city, and abducted the child, only thirteen years of age, before taking him to an unknown destination.

They added that the soldiers used excessive force against the patients, and the workers, in the medical center.

The Committee stated that such invasions are serious violations of all related international laws and treaties, including the Fourth Geneva Convention, which protect all medical centers and clinics.

It voiced an urgent appeal to all legal and human rights groups around the world to intervene, and provide the needed protection to the Palestinian people, their homes, lands and institutions, especially medical centers that are supposed to be protected at all costs from these invasions.

It is worth mentioning that the soldiers frequently place iron gates at the main entrance of the medical center and prevent the Palestinians from entering it.

Furthermore, the soldiers abducted a young Palestinian man from Qalqilia, and two others in Qabatia town, south of Jenin, in the northern part of the occupied West Bank. 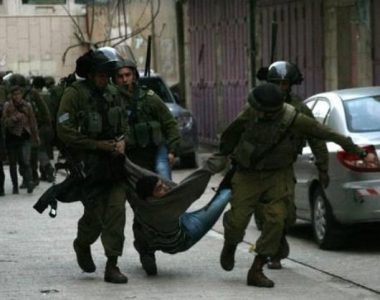 The Palestinian Prisoners’ Society (PPS) has reported that Israeli soldiers abducted, on Wednesday at dawn, four Palestinians in the northern West Bank city of Nablus, and one in Hebron, in southern West Bank.

The PPS office in Nablus said dozens of soldiers invaded and searched homes in several neighborhoods in the city and abducted four Palestinians, from the Northern Mountain area.

They have been identified as Ahmad Sa’ad, Nidal Sal’ous, Yasser Sal’ous and Husam Sal’ous; the soldiers cuffed and blindfolded them, before moving them to an unknown destination.

In addition, dozens of soldiers invaded Bani Neim and Yatta towns, east and south of Hebron city, searched many homes and abducted one Palestinian.

The soldiers abducted Namedi Abu Jawar, 20, from his home in Bani Neim, after searching the property and interrogating him, along with his family.

The soldiers also searched homes in Yatta and summoned three siblings for interrogation in Etzion military base and security center, north of Hebron.

Furthermore, the soldiers closed Abda Junction, south of Hebron, for several hours after alleging finding a suspicious object, and continued the closure of the iron gate at the entrance of the al-Fawwar refugee camp, for the third day.

Palestinian MP Mohamed Dahlan denied yesterday reports claiming he plans to form and head a new Palestinian government, calling these reports the “production of security cooperation” between the Palestinian Authority (PA) and Israel, a statement said.

In the statement, which was sent to mass media, Dahlan, who was dismissed by PA and Fatah leader Mahmoud Abbas from Fatah in 2011, said that “these reports are not more than lies spread by the PA aimed to deviate the eyes from the suffering of the Palestinians and I will not comment on them”.

He also said that “these lies are signs of the disability of the PA political leadership, which suffers major crises [because of] the acts and behaviour of those practicing oppression against the Palestinians and depleting their resources”.

In addition he said: “I have repeatedly announced my positions regarding all the national issues, including those related to ruling and administration. I have dedicated all my abilities, as a Palestinian soldier, to work on getting the Palestinians out of the ongoing crises.”

Dahlan noted that the latest of his positions was praising the decisions of the PLO’s Central Council, which, he said, would never be implemented on the ground.pale

The former leader of the PA protective apparatus in Gaza, one of the most notorious PA security agencies that tortured many Palestinians between 1994 and 2000, said that the “tragic reality of the Palestinians could not be treated by efforts of one person or even one faction”.

He added: “The only exit from the current situation is to form a national salvation leadership that includes all parties without any exceptions. There, I will be a soldier, not looking for a position in order to help the Palestinians.”

Mosque in Jaffa, Israel, which came under attack by racists [File photo]

Israeli MKs and minister have been working to introduce a new copy of what is known as the “Muezzin Bill” to give power to police to break into mosques to silence the Muslim call to prayer, Quds Press reported yesterday.

According to Israeli news website 0404, the new copy of the bill, which had preliminary Knesset approval in March 2017, is planned to be proposed to parliament soon.

The website said that a committee consisting of Interior Minister Gilad Erdan, Environment Minister Zeev Elkin and other MKs, including Moti Yogev who initiated the bill, have already laid down the terms of the new copy.

According to the Israeli website, the new amendments give addition power to Israel Police that enables officers to break into mosques in Israel and Jerusalem, confiscate loudspeakers and impose fines up to 10,000 shekels ($2,860) on those said to be violating the law.

The Israeli government began measures to approve the bill in November 2016 and it passed a first reading the Knesset in March 2017.

Palestinians living in Israel, both Muslims and Christians, criticised the move as another step towards Judaising Jerusalem, eradicating the Arabic history of Palestine and supressing religious freedoms.

“It is an aggression on the Islamic rituals,” Sheikh Sulieman Satel, Imam of Al-Nuzha Mosque in Yaffa, said. “The real aim of this racist bill is not an attempt to reduce noise, but to silence the Muslim call to prayer… because those behind it hate Islam.”

Palestinians “will not remain silent while their mosques are desecrated and their legal, religious and humanitarian right to practice their religious rituals freely is violated,” he continued.

Sheikh Satel said that this bill “is part of the continuous planning to erase the identity of the Palestinians in Israel in addition to the numerous laws, including those giving power to Israeli authorities to confiscate the property of the Palestinian endowments.”

Israeli authorities will expel the residents of Umm Al-Hiran, a Bedouin Palestinian village in the Negev, in a matter of weeks, as plans proceed to build a new Jewish town in its place.

Yair Maayan, head of the government authority for Bedouin “resettlement” in the Negev, told the Jerusalem Post that Umm Al-Hiran’s residents – all Israeli citizens – will be forced out in April.

“The Israel Lands Authority has issued eviction notices”, Maayan said yesterday, adding that the plan was to force the villagers to live in Hura, a government-approved Bedouin town.

Umm Al-Hiran is to be demolished in order for a new town, Hiran, to be built in its place, “which is to be populated mostly by religious Jews”. The Israeli state plan has been backed by the Supreme Court.

The Bedouin Palestinian residents of Umm al-Hiran are facing their third expulsion, having been expelled from their lands in 1948 and again in 1956.

Local activist Raed Abu al-Kaeean told the Jerusalem Post “that police have informed residents that they must leave by April 1 ‘or be evicted by force’”. He added that police have been visiting the village to plan “how to make the incursion and to destroy the village”.

Israeli soldiers and their tanks are seen monitoring the area of the southern Gaza, on February 18, 2018

A Palestinian youth has succumbed to injuries sustained during clashes with Israeli forces which broke out during the ‘Friday of Rage’ protests near the Gaza Strip’s border.

The 19-year-old was wounded as Israeli forces started confronting Palestinian protesters in the city of al-Breej in the coastal enclave last Friday, the ministry added.

Separately, it was reported that a Palestinian youth had been wounded during fresh clashes with Israeli forces at the entrance to the village of Baita near the West Bank city of Nablus.

Palestinians in Gaza and the West Bank have been holding weekly protests on Fridays since early December 2017, when US President Donald Trump said Washington was recognizing Jerusalem al-Quds as Israel’s “capital.”

Israel has in recent weeks intensified its air raids against the Gaza Strip.

Tel Aviv pulled its forces out of Gaza in 2005, but has been incessantly attacking the sliver, which has been under a crippling siege for over a decade.

The regime has waged three wars on the coastal enclave since 2008, including the 2014 offensive, which left more than 2,200 Palestinians dead.