A Palestinian activist was injured on Tuesday morning after his vehicle was targeted with stones by Israeli settlers near the entrance to Beita town south of Nablus city.

Eyewitnesses told the PIC reporter that dozens of settlers rallied near the settlement outpost Avitar, which is being removed by the Israeli forces, and attacked the Palestinian citizens moving on a nearby road.

They said that the anti-settlement activist Zakaria al-Sadda was slightly injured in the face after Israeli settlers threw stones at his car smashing its windshield.

A Palestinian ambulance rushed to the scene to provide first aid to al-Sadda, according to the witnesses.

The Israeli occupation forces in the early morning hours started to remove a newly-established settlement outpost in Jabal Sbeih area in Beita following a wave of anger and protest in the town.

In a move condemned by observers as an act of social media imperialism, the Facebook admin blocked the “Palestine.net” page, which monitors terror acts and violations by the Israeli occupation forces and settlers across the occupied Palestinian territories.

Prior to its removal, the page had garnered 180,000 followers.

Over the past couple of days, a social media sweep kick-started by Facebook administration targeted 29 Palestinian pages and accounts. The measures included the removal of pages, accounts, posts and photos deemed inflammatory and supportive of anti-Israel activism. 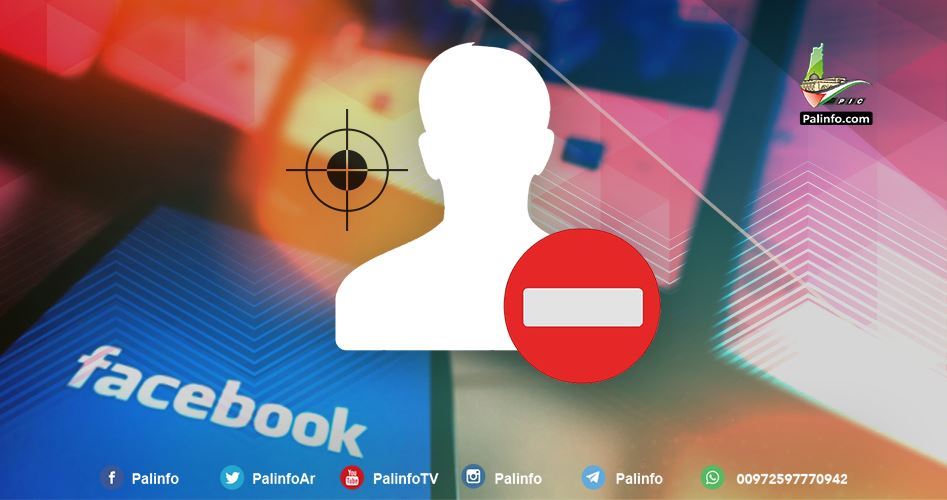 Social media activists will launch an electronic campaign against Facebook for its deliberate targeting of pages which support Palestinian rights.

Social media users will use the hashtag #FBfightsPalestine to draw attention to their campaign.

The campaign is scheduled to begin on Wednesday at 8 p.m. and will be the first step against Facebook’s latest actions. It aims at educating people about Facebook’s recent treatment of Palestinian content and the extent of its violations. 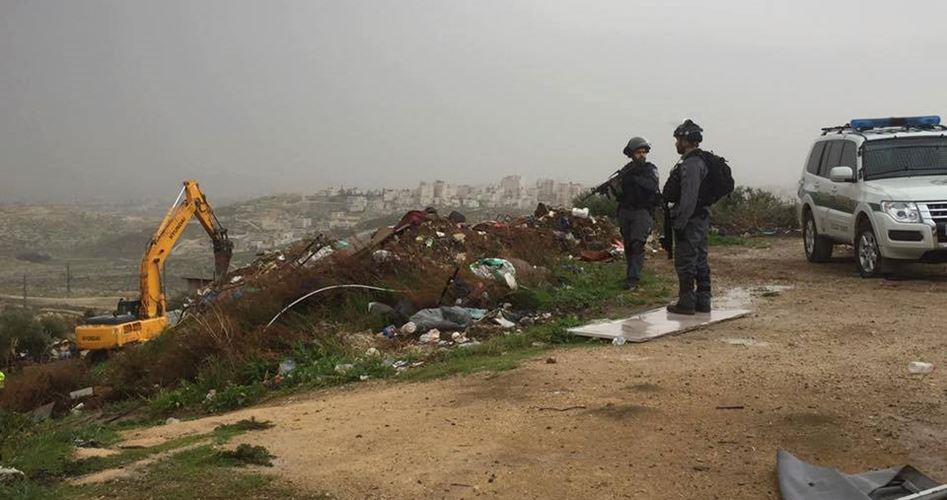 The Israeli military demolished on Tuesday a Palestinian home in the Bedouin community of Jabal al-Baba to the east of Occupied Jerusalem and detained a Palestinian youth from the area.

Activist Atallah al-Jahaleen said that Israeli forces, escorted by civil administration crews, rolled into Jabal al-Baba and demolished the structure, owned by Hani Abu Aweida, under the pretext that it was built without a permit.

Al-Jahaleen added that at least 13 members have been taking shelter at the home, which was demolished without prior notifications.

At the same time, Palestinian young man Ghassan al-Jahaleen was kidnapped by the Israeli forces shortly after they backtracked from Jabal al-Baba.

Bedouin homes, communities, and donor-funded facilities in Occupied Jerusalem are subject to continuous Israeli destruction under the guise of unlicensed construction.

The Syrian Coalition stressed that the military escalation in many areas across Syria, especially in eastern Ghouta is clearly aimed at undermining all chances of reaching a political solution. It stressed that there is no denying the fact that Russia wants to bury the UN-led political process altogether.

In a press release issued on Tuesday, the Coalition said that Russia wants to finish off the UN-led political process, especially after it announced that it supplied regime forces with new sophisticated weapons to use them in the ongoing onslaught on eastern Ghouta.

“The onslaught on eastern Ghouta represents a dangerous escalation, with the Assad regime and the Russian occupation aircraft launching over 70 airstrikes and dropping 25 barrel bombs as well as targeting residential neighborhoods with more than 150 Grad rockets, six surface-to-surface missiles, and a barrage of artillery fire,” the Coalition said.

The Coalition emphasized that “the latest developments are more than enough to alarm sponsors of the political solution who are watching idly by. They must also draw the attention of the countries claiming to stand on the side of the Syrian people and requires immediate, firm stances from these countries.”

“The genocidal war and barbaric aggression would not have taken place against people of eastern Ghouta had it not been for the silence of the international community and sponsors of the political solution. This silence represents a green light encouraging the Assad regime and its allies to carry on with these atrocious crimes. The international community’s choosing to watch idly by makes it a partner in the aggression on the Syrian people.”

The Coalition warned all members of the international community of the direct consequences of their continued silence and inaction, chiefly among them is the undermining of all chances of reaching a political solution in Syria.”

The Coalition called upon the UN Security Council to take urgent, serious action to protect 400,000 civilians who have been trapped for five years in eastern Ghouta and to act in accordance with its legal, political and moral responsibilities.

The Assad regime, backed by the Russian occupation forces and Iranian militias, has unleashed a large-scale terrorist ground attack on the Damascus suburb of eastern Ghouta. Airstrikes killed at least 115 people in the past two days while dozens went missing.

The PLO’s Committee for Prisoners and Freed Prisoners revealed on Monday that the Israeli authorities pay stipends to Jewish settlers indicted of crimes against Palestinians, Quds Presshas reported. Israel has complained frequently about payments to the families of Palestinian prisoners by the Palestinian Authority, claiming that they “encourage terrorism”.

As an example of the Israeli payments, the rights group mentioned the case of Israeli settler Yoram Skolnik, who shot dead Musa Abu Sabha while he was lying with his face on the ground and his hands tied behind his back in March 1993. The killing took place near the illegal settlement of Susia in the occupied West Bank city of Hebron, and the killer has been receiving a monthly salary in addition to his national insurance payments.

Furthermore, Skolnik also received financial assistance from the government to start a business after he was released from prison, the Committee pointed out. It noted that the Israeli authorities reduced his sentence from life to just eight years.

Israel’s official and popular support for criminals and appeals for their release from prison are part of the “rising racism, fascism and encouragement of extremism against the Palestinians,” the Committee claimed. Ninety-nine per cent of Israeli Jews who were imprisoned after killing Palestinians were released and received legal and social support, as well as full protection by successive Israeli governments, it added.

According to the Head of the Committee, Issa Qaraqe, the international community must take steps against Israeli laws which clearly target human rights and the rights of the Palestinians.

Senior Palestinian Liberation Organisation official Saeb Erekat has expressed pessimism as to the likelihood of a two-state solution and the negotiation efforts of the Palestinian Authority (PA), according to the Arab news agency Assabeel.

“I think that the real president of the Palestinian people is the [Israeli] Defence Minister, Avigdor Lieberman, and the Palestinian prime minister is the coordinator [of Government Affairs in the Occupied Territories], Poly Mordechai,” Erekat said in an interview with Israel’s Channel 2.

Erekat was similarly doubtful at the proposed two-state solution as the answer to the conflict stating: “The Palestinian street began to refuse this idea because it sees it as unrealistic in light of the growing settlements.”

Erekat, 62, has served as chief negotiator since 1996, having acted as a Palestinian delegate in numerous international conferences including the landmark Oslo Accords of 1993.

Erekat: US under Trump has lost role as Mideast mediator

The PA has come under heavy criticism in recent months over its detention of critics of its policies and its continued security coordination with Israeli forces.

Despite having initially stated that the PA had cut all contact with the US following President Donald Trump’s recognition of Jerusalem as Israel’s capital, last week a senior PA official clarified that communication was ongoing, although political dialogue had been scaled back.

Earlier this month, it was also revealed that the PA had collaborated with the Central Intelligence Agency (CIA) to spy on other Palestinian figures who were opponents and rivals of Abbas.

The document alleges that three Palestinian security personnel formed an electronic surveillance unit in mid-2014 and monitored the phone calls of thousands of Palestinians, senior figures in the Palestinian factions and even judges, lawyers, civil society leaders and politicians.

A survey last year found that some 67 per cent of Palestinians want Abbas to resign, with nearly two-thirds believing that the proposed two-state solution was no longer feasible because of Israel’s continued settlement expansion.

Read: PLO prepares to boycott US goods over Jerusalem decision

Activists will launch a social media campaign against Facebook for its deliberate targeting of pages which support Palestinian rights.

Social media users will use the hashtag #FBfightsPalestine to draw attention to their campaign.

Coordinator of Sada Social Centre, Iyad Rifai, said the campaign is scheduled to begin tomorrow evening will be the first step against Facebook’s latest actions.

He explained that the campaign aims to educate people about Facebook’s recent treatment of Palestinian content and the extent of its violations.

“We are planning to take further steps, if Facebook does not clearly clarify its policies with regards to dealing with the Palestinian content,” Rifai added.

Last year, 200 violations were monitored by Facebook against Palestinians including the closure and blocking of Palestinian pages and accounts and the deletion of photographs and postings.

Read: Is Abbas serving the Palestinians or fooling them?

The Israeli Ministerial Committee for Legislation has approved a proposed bill that makes it possible to revoke the residency status of persons in occupied East Jerusalem and Golan Heights if they are convicted of engaging in anti-Israel activities, Haaretz reported.

The revocation of residency will make it possible for Israeli authorities to expel residents who are involved in the resistance against the occupation or who breach their loyalty to the State of Israel.

Israel classifies Palestinians living in East Jerusalem and Druze in the Golan Heights as “residents” and not citizens.

According to the Palestinian Ministry of the Interior, Israel has revoked the residency status of more than 14,500 Palestinians from East Jerusalem since 1967 under the pretext that they were living outside the borders drawn by the Israeli authorities for Jerusalem after its occupation in the same year.

Erekat: Lieberman is the real president of Palestine

The new bill comes after the Israeli Supreme Court ruled in September against a decision by the interior ministry to strip four Palestinians of their Jerusalem residency over their alleged affiliation to Hamas.

The court also gave the Israeli government six months to change the laws in a way that would allow it to revoke Palestinians’ East Jerusalem residency.

The ministerial committee’s approval of the bill lays the groundwork for discussing it in the Knesset and eventually passing it into law.

#OccupiedJerusalem: there’s one set of rules for Jews and another for Palestinians

Palestinian children seen at a UNRWA school during a visit by Pierre Krähenbühl, commissioner-general of the UN Relief and Works Agency (UNRWA) to Gaza on Janaury 22, 2018

Gaza’s Ministry of Education said yesterday that it has not received any funds from the Palestinian Authority (PA) government since the signing of the reconciliation agreementbetween Fatah and Hamas in October last year.

Undersecretary of the Ministry Ziad Thabet said that the PA government has not paid a single penny to the Ministry of Education in Gaza since then.

In statements to Quds Press Thabet denied allegations by the PA Minister of Education and Higher Education Sabri Saidam that $27 million had been paid to the ministry’s employees in Gaza after being collected from students and school canteens.

Thabet pointed out that Gaza’s Ministry of Finance is only able to pay a small part of the Ministry of Education’s financial allocations which is never enough. He continued to say that this negatively affects the educational process.

The Palestinian official asked the Ramallah-based PA government to secure the necessary operational budget for Gaza’s Ministry of Education so that it can perform its tasks to the fullest extent possible.

Gaza ministries suspended work for several hours yesterday in protest at the PA government’s failure to assume its responsibilities toward the Palestinian people in Gaza.