The excavation works are to be carried out beneath, near and around Al-Aqsa Mosque and occupied Jerusalem’s Old City.

Member of the Joint List in the Israeli Knesset Talab Abu-Arar said: “These works serve the Western agenda, as well as extremist Jewish organisations.”

Abu-Arar said that the works “are the most dangerous,” noting they “were secret in the past.”

He called for efforts to confront Israel’s Judaisation policies because “Al-Aqsa Mosque is in real danger”.

It is expected that the government, which has met inside one of the excavated tunnels beneath Al-Aqsa Mosque and decided to prepare a plan for extra excavation works, would approve the funds.

An injured Palestinian can be seen receiving medical care at the Al-Najar hospital in Gaza on 20 October, 2013

Companies which provide meals to patients in hospitals in the besieged Gaza Strip have stopped catering to medical centres because they have not been paid for months, a Ministry of Health spokesperson revealed yesterday.

Speaking to Quds Press, Ashraf Al-Qidra said the government of national accord in occupied Ramallah had not settled the catering companies’ payments.

“Hundreds of patients are now without food,” Al-Qidra said, adding that the Ministry of Finance had not responded to requests made weeks ago to settle the companies’ dues.

Last year, Gaza could not cover the cost of the meals and obtained funding from charities.

Healthcare in Gaza: Is there any hope left?

RAMALLAH (Ma’an) — Fourteen-year-old Muhammad Fadel al-Tamimi remains in a medically-induced coma as of Tuesday, days after he was hot in the face with a rubber-coated steel bullet by Israeli forces.

The Palestinian teenager, a resident of the central occupied West Bank town of Nabi Saleh, was injured during clashes in his village on Friday.According to locals, the bullet settled in the boy’s skull after it entered his face below his nose and broke his jaw.
The teenager is currently being held in the ICU of the al-Istishari Hospital in Ramallah.
Al-Tamimi, a former prisoner, was detained when he was 13 years old, and was previously injured several times during weekly clashes in his village.
His cousin, 17-year-old Ahed al-Tamimi, was detained on Tuesday morning by Israeli forces for slapping and kicking Israeli soldiers on the same day that Muhammad was injured.
(Source / 19.12.2017) 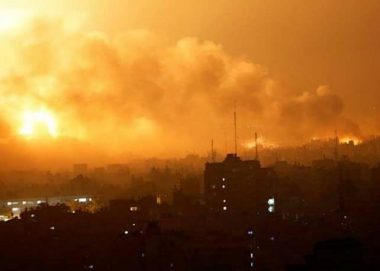 The Israeli Air Force carried out, on Monday at dawn, many air strikes into several parts of the Gaza Strip, causing serious damage to buildings and homes.

The army fired at least three missiles into the al-Waha area, in northwest of Gaza city, destroying a structure, a causing damage to many surrounded homes.

Explosions were also seen and heard in Central Gaza, after the soldiers fired missiles striking structures in the area.

Israeli war jets also flew above many homes and lands in several parts of the Gaza Strip, and fired many flares, while army drones kept flying over the coastal area until early morning hours.

The fishermen had to leave without being able to fish and provide for their families, in fear of further Israeli escalation. 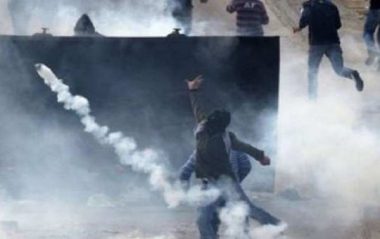 Medical sources said at least 280 children were in school, when the soldiers fired the gas bombs at it.

The army surrounded the school and several nearby neighborhoods, and were trying to prevent the Palestinian from marching in their own town.

It is worth mentioning that the soldiers have been frequently invading the village, and breaking into homes, especially at dawn, and abducted many Palestinians, including children.

Furthermore, the soldiers abducted two Palestinian children from Betunia town, west Ramallah, and caused many schoolchildren to suffer the effects of teargas inhalation.

In addition, the soldiers attacked dozens of Palestinian worshipers in the Al-Aqsa Mosque, in occupied Jerusalem, and abducted a young man.

The soldiers were accompanying a group of colonist settlers who conducted provocative tours in the holy site, and were using loud speakers. 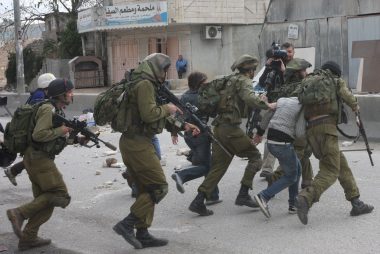 Israeli soldiers abducted, on Tuesday morning, two Palestinian children from Betunia town, west of the central West Bank city of Ramallah, and caused many schoolchildren to suffer the effects of teargas inhalation.

Media sources in Ramallah said the soldiers invaded the town, and fired many gas bombs at schools, causing many children, and residents in nearby homes, to suffer the effects of teargas inhalation.

The soldiers also searched and ransacked homes, and abducted two children, before moving them to an unknown destination.

The Israel Prison Service (IPS) on Monday prevented the entry of blankets and winter clothes for the Palestinian prisoners held in Eshel jail.

Director of the Palestinian Prisoner Society in al-Khalil province, Amjad al-Najjar, said in an exclusive statement to the PIC reporter that the Palestinian prisoners languishing in Israeli desert jails, including Eshel, are usually denied winter clothing and left to shiver in the freezing weather in winter that gets worse during the night hours.

Najjar pointed out that the prisoners in Israeli desert jails live under harsh detention conditions, particularly in winter, where part of them is kept in tents while the other part is locked up in old cells with no glass windows that lack the most basic living essentials.

He added that the IPS forces routinely carry out night break-ins and search campaigns, force the prisoners out of their cells in the cold weather and throw their blankets in the prison yard to get wet under the rain.

Najjar appealed to human rights institutions and the International Committee of the Red Cross to intervene to save the lives of the Palestinian prisoners who are dying slowly due to the cold weather and the IPS racist practices.

A Palestinian young man was kidnapped by Israeli soldiers on Monday evening near Nablus’s northern town of Berka.

Activist Ghassan Daghlas, in charge of the settlement file in the northern occupied West Bank, identified the youth as Mohamed Abu Amr.

He added that the abduction was carried out following an ambush set up by the occupation patrols in the area.

The Israeli occupation forces (IOF) at dawn Tuesday raided homes and kidnapped a number of Palestinian citizens during campaigns launched in different areas of the occupied West Bank.

The IOF broke into the towns of Kafr Ra’i, Arraba, Ya’bad, Raba and Jalqamus in Jenin province and arrested seven Palestinian citizens, most of whom are Hamas supporters.

Local sources told the PIC reporter that the IOF soldiers stormed Jalqamus town to the south of Jenin city, raided the family house of the Palestinian ex-prisoners Yousuf and Mohammed al-Qirm, who were deported to Gaza after being freed in the Wafa al-Ahrar prisoner swap deal, and arrested their 22-year-old brother Muawiya.

During a raid campaign launched in the nearby town of Raba, the IOF broke into the house of the Palestinian martyr Hasan al-Bazur, who carried out an anti-occupation car-ramming attack a year ago, and arrested his father after searching the house and wreaking havoc on it. Two other Palestinians were arrested in the same town.

Meanwhile in Ya’bad town to the south of Jenin, the IOF arrested the Palestinian citizen Mahmoud Hamdan and his son after raiding and searching their house.

Many suffocation cases were reported in the violent clashes that erupted during the night hours in Arraba between the IOF soldiers who raided the town amid heavy firing of tear gas canisters and the Palestinian youths who responded by throwing stones.

According to local residents, the Israeli soldiers raided the house of the Palestinian ex-prisoner Mona Qa’dan and handed her a notice to appear before the Israeli intelligence in Salem military camp.

A Palestinian youth was reportedly arrested in another IOF campaign in Siris town to the south of Jenin city.

The IOF also broke into Beit Furik town to the east of Nablus city and arrested a Palestinian citizen. Clashes flared up at the time between the Israeli soldiers and Palestinian youths where a Palestinian young man, whose identity is not known yet, was injured.

Two other Palestinians were detained in al-Fari’ah refugee camp to the north of Nablus city.

The IOF soldiers kidnapped the 17-year-old girl Ahed al-Tamimi, who has previously received “Handala Courage Award”, from her house in Nabi Saleh village to the west of Ramallah for challenging Israeli soldiers during the clashes that took place in the village two days ago.

The IOF also confiscated a vehicle belonging to a Palestinian citizen living in al-Jilda neighborhood in al-Khalil.

A Palestinian man was shot and injured in his hand during violent clashes with Israeli Occupation Forces (IOF) that erupted in Beit Fourik town east of Nablus city at dawn Tuesday.

Local sources told the PIC reporter that IOF troops stormed several Palestinian homes and handed over notices threatening the families of the consequences of continuing to throw stones at Israeli vehicles and settlers.

The IOF broke into al-Farea refugee camp to the north of Nablus and arrested an ex-detainee after storming and inspecting his house.