Labour Party leader Jeremy Corbyn has urged “increasing international pressure” to be brought to bear to end Israel’s military occupation of the West Bank and Gaza Strip, in a statement released yesterday evening to mark the Balfour Declaration centenary.

The full statement by the Leader of the Opposition is as follows:

Today marks the centenary of the British government’s Balfour Declaration, which has shaped the modern history of the Middle East.

The fact that this promise by what was then colonial Britain is celebrated by one side and commemorated as a disaster by the other reflects the continuing tragedy at the heart of the Israel-Palestine conflict.

Balfour promised to help establish a national home for the Jewish people in Palestine while pledging that nothing would be done to prejudice the rights of its “existing non-Jewish communities”, a reference to the Palestinian Arabs who then made up 90% of the population.

A hundred years on, the second part of Britain’s pledge has still not been fulfilled, and Britain’s historic role means we have a special responsibility to the Palestinian people, who are still denied their basic rights.

So let us mark the Balfour anniversary by recognising Palestine as a step towards a genuine two state solution of the Israel-Palestine conflict, increasing international pressure for an end to the 50-year occupation of the Palestinian territories, illegal settlement expansion and the blockade of Gaza.

As many Israelis and Palestinians believe, there can only be a lasting peace in the Middle East on the basis of a negotiated settlement that delivers justice and security for both peoples and states.

Read: Britain must atone for the Balfour declaration – and 100 years of suffering

BETHLEHEM (Ma’an) — Palestinians on Friday evening laid to rest 26-year-old Muhammad Moussa in his home town of Deir Ballout, near Salfit in the central occupied West Bank, shortly after receiving his body from Israeli authorities on Friday afternoon.

Moussa was shot and killed on Tuesday morning near the illegal Halamish settlement north of Ramallah, after Israeli forces opened fire on his vehicle as he was passing a flying checkpoint set up in the area.
Witnesses at the time said that Moussa was shot in the back, and was left to bleed out on the street before medics arrives. He died on the way to an Israeli hospital. His sister Latifa, 33, was injured during the shooting and was reported to be in moderate condition.
The Israeli army claimed at the time that they opened fire on a “suspect” vehicle that approached the soldiers in a “suspicious manner.”A report from Wafa news on Friday claimed that the siblings were driving to Ramallah in a car with Israeli license plates when an Israeli army patrol waved at the car to stop.
“However, driving an illegal car, (Moussa) panicked and drove away, but when he got to the entrance of the nearby settlement, an Israeli settler opened fire at the car killing Mohammad and injuring his sister in the shoulder,” Wafa said, contradicting earlier reports that he was shot by Israeli forces.
An Israeli army spokesperson did not respond to a request for comment on Moussa’s killing.
Hundreds of Palestinians have been shot by Israeli forces near settlements and checkpoints in the West Bank for allegedly attempting to carry out stabbing and car-ramming attacks against Israeli forces and settlers.
Israeli forces routinely shoot Palestinians, oftentimes killing them, during these alleged attacks on Israelis, even if the Palestinian could be detained through nonlethal means. This Israeli practice has prompted rights groups to accuse Israel of carrying out extrajudicial executions on Palestinians. 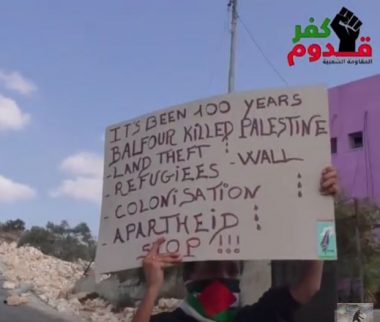 Morad Eshteiwi, the media coordinator of the Popular Committee against the Annexation Wall and Colonies in Kufur Qaddoum, said dozens of locals, accompanied by Israeli and international peace activist marched in the village, protesting the ongoing closure of Kufur Qaddoum’s main road, which was blockaded by the army more than fourteen years ago, to enable easy access to colonists, driving to and from Kidumim illegal colony, built on private Palestinian lands.

He added that the soldiers resorted to excessive force against the protesters, and fired gas bombs and concussion grenades at them.

The soldiers also prevented many Israeli and international activists from entering Kufur Qaddoum to participate in the procession with the Palestinians. 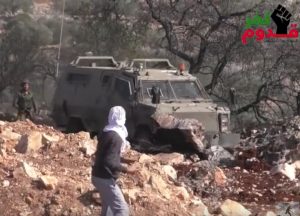 The procession in Kufur Qaddoum started in the afternoon, when the locals, and the international peace activists, marched while chanting against the ongoing illegal Israeli occupation, its colonialist polices and escalating violations, and demanding the international community to aid the Palestinians in achieving their legitimate rights of liberation and independence.

The protesters also demanded Britain to cancel its celebration of the 100th anniversary of the Balfour Declaration.

It is worth mentioning that the soldiers invaded and ransacked many stores in Kufur Qaddoum, an issue that led to clashes with local youngsters, who hurled stones on the military jeeps.

The Israeli occupation army on Friday night intensified the presence of its forces in the eastern and southern areas of Jenin in the West Bank and obstructed the movement of Palestinian citizens.

Local sources told the Palestinian Information Center (PIC) that Israeli soldiers deployed road barriers at the entrances leading to the eastern neighborhood of Jenin city, where they embarked on checking the IDs of passing citizens and interrogating them.

Several soldiers were also deployed on the road leading to the Haddad tourism village in the area and near the entrance to the evacuated settlement of Ganim.

Other soldiers also set up a makeshift checkpoint on the Ya’bad town road, south of Jenin, intercepted passing cars and checked the IDs of passengers.

The Hamas leader Hassan Yousef affirmed that resistance is a right for the Palestinian people which will never be given up.

In a press statement on Saturday, Yousef commented on the latest remarks of Palestinian Authority President Mahmoud Abbas on resistance weapons. He said that the problem is not only with Abbas’s repeated statements in this regard, but also in Fatah Movement’s procrastination in lifting the punitive measures on Gaza.

The Hamas leader called on Palestinian factions to confront all of those who exert efforts for hindering the reconciliation. He invited the factions to convene for bringing the national issues to discussion and accelerating the formation of a national government. He also called for conducting general elections that would pave the way for reforming the Palestine Liberation Organization.

The Israeli occupation forces (IOF) on Saturday morning arrested a Palestinian citizen from Rummanah town to the west of Jenin while he was heading to al-Khalil city.

Local sources told the PIC reporter that the IOF soldiers stationed at Etzion checkpoint to the south of Bethlehem city stopped the car Mahmoud Bushnaq, 46, was riding and detained him.

They pointed out that arrest campaigns have been recently on the rise at the permanent and temporary checkpoints scattered in the occupied West Bank.

Israeli Occupation Forces (IOF) stormed the city of Jenin in the northern West Bank at dawn Saturday. IOF soldiers  broke into a Palestinian home in Abu Dehair neighborhood and assaulted the residents.

Local sources told the PIC reporter that the IOF soldiers, in several military jeeps, stormed the neighborhood then broke into the house of Jihad Arkawi in the early morning. The soldiers assaulted the family members and interrogated them, the sources added.

IOF troops were deployed in al-Jaberiyat area as well. Clashes between Palestinian youths and the IOF soldiers erupted in the outskirts of Jenin refugee camp, according to the sources.

Haaretz newspaper on Saturday reported that the Israeli authorities on Wednesday asked the Supreme Court for a two-week delay in announcing its position on Susya village despite the fact the Israel’s war minister, Avigdor Lieberman, has declared that there will be no more delays in the demolition decision.

The paper said that the request was made after senior European and British diplomats pressured Israel’s Prime Minister, Benjamin Netanyahu, and Lieberman not to demolish the village.

Quoting a source involved in the matter, Haaretz noted that ahead of Netanyahu’s visit to London, British diplomats contacted Israeli officials and informed them that Britain has reservations about the evacuation of Susya.

Israeli sources claimed that the Palestinian village of Susya was “illegally” established near a Jewish settlement holding the same name and that demolition orders have been issued against its buildings.

The petition to demolish the Palestinian village has been under consideration since 2014.

Susya is located in Area C, which is under full Israeli civil and security control, and its residents have been expelled from their homes several times over the past 30 years.

In 1986, the village was declared a national park and the Palestinian residents were evacuated to their agricultural lands. The Israeli army evicted them again in 2001 and knocked down the caves and huts they were living in.

The Supreme Court ordered to halt the demolitions and allow Susya residents to stay in the village, but it did not ask the so-called Civil Administration to allow them to build new buildings instead of the ones destroyed. None of the established structures have building permits.

Qamar Mashriqi, the Susya residents’ lawyer, said, “Lieberman is determined to wipe out the village to enable settlers to complete their takeover of the area. The international community must make it clear to Israel that it will not accept the removal of entire Palestinian villages from Area C in violation of the international law.”

The member of Hamas Political Bureau, Mousa Abu Marzouk, condemned in a tweet on Saturday the Palestinian Authority’s (PA) insistence on the existence of the EU mission at Rafah border crossing. This means the return of the Israeli control over the crossing, he highlighted.

“Why is the PA keen on the Israeli existence at the crossing when it has become managed by a national administration?” Abu Marzouk wondered.

Last Wednesday, the Palestinian consensus government took over the control of Gaza Strip crossings in accordance with the latest Cairo reconciliation agreement.