The South African Parliament has refused to meet with an Israeli delegation that was planning to visit members of the country’s assembly in Cape Town.

The planned visit by the Israeli delegation was rejected by the late Nelson Mandela’s ruling party the ANC which has the majority in Parliament with 249 seats out of a 400-seat assembly.

Commenting on ANC’s rejection, Mandla Mandela, grandson of Nelson Mandela, said: “We applaud Parliament’s decision to reject the invitation for the Israeli parliamentary delegation to visit. In so doing parliament has stayed true to Madiba’s [Mandela’s clan name] commitment to stand by the Palestinian cause”.

Mandla, who is himself a member of Parliament and holds the Parliamentary Portfolio Committee Whip, also expressed “gratitude and appreciation to the ANC parliamentary caucus for its resolute and firm stand to reject the Israeli invite” before  calling on them to “pressurise [our] ANC led government to deny [the Israeli delegation] access to [our] country.”

The decision was warmly greeted by various organisations, human rights groups and political parties. The human rights and Palestine solidarity organisation, BDS South Africa, was amongst the groups that welcomed the snub.

In welcoming the decision, South Africa’s largest trade union federation, COSATU, has however, cautioned that: “We are aware that certain reactionary opposition parties and individuals will try to circumvent this Parliamentary decision and still fraternise with the Israeli delegation.”

those who entertained officials from apartheid SA were on the wrong side of history during the 1980s, and those who are entertaining Israel today will be judged harshly by history.

We believe that amidst the Israeli oppression, the people of Palestine, when they hear of this act of solidarity from South Africa, will find strength and motivation.

“BDS South Africa will continue to work with partner organisations on the isolation of apartheid Israel until it complies by international law,” they added.

Israeli forces prepare to fire tear gas at Palestinians as they enter the Al Aqsa Mosque following the removal of Israeli security measures near the entrances to Al Aqsa Mosque Compund in Jerusalem, on July 27, 2017

Chairman of the Jerusalem International Centre Hassan Khater said that the Israeli occupation stole the documents from the “rooms, libraries, documentary archives” of Al-Aqsa Mosque when its forces were alone during the closure.

“Through these documents, the Israeli occupation is putting its hand on the endowments, properties and real estate of Jerusalem’s endowment department,” Khater said, noting that the theft of these documents is a “real disaster”.

He noted that these documents include “details, secrets and signatures”, adding that more than 90 per cent of Jerusalem’s Old City is part of these endowments.

Khater stressed that the “Israeli occupation’s ability to forge documents will harm the endowments of the city.”

He also expressed his fears that the Israeli occupation would use these documents to help carry out its Judaisation plans in the holy city, noting that Judaisation is “the main battle” between the Palestinians and the Israelis.

Egypt’s ousted President Mohamed Morsi and 21 other defendants attend a court session behind a cage at the Cairo Police Academy in Cairo, Egypt on August 06, 2017

Egypt’s ousted President Mohamed Morsi, the first to be democratically-elected, reiterated on Sunday that his trial in the ordinary courts has no legal validity, because he is still president and, as such, should be held accountable according to the constitution. Morsi was ousted by a military coup in 2013 by his then Defence Minister, Abdel Fattah Al-Sisi.

He made his comments in the Cairo Criminal Court, where his first retrial hearings are being held. Along with 21 other defendants, he is accused of “communicating with Hamas”.

“With all respect,” explained Morsi, “the court is not competent to charge me.” According to a report by Anadolu, the head of the defence committee, Abdel Moneim Abdel Maqsoud, explained that the deposed president is holding to the fact that the jurisdiction of the court is not commensurate with his position as a president. “That, in fact, there is a certain system stipulated by the constitution for a trial of the president.”

This was a reference to Article 152 of the 2012 constitution, which is reiterated in the 2014 constitution. It stipulates that “the President of the Republic shall be tried by a special court presided by the head of the Supreme Judicial Council (officially in charge of the management of the Judges’ affairs), the Senior representatives of the head of the Supreme Constitutional Court (the highest judicial commission in Egypt which is specialized in the constitutionality of the laws and their adherence to the articles of the Constitution) and the Council of State (a judicial body responsible for settling administrative disputes between individuals and the governing bodies of the State), in addition to the oldest two heads of the courts of appeal. The Attorney General is the prosecutor, and if one of the judges is not able to attend he will be replaced by whoever follows him in seniority.”

The “communication with Hamas” case dates back to 18 December, 2013, when former Egyptian Attorney-General Hisham Barakat ordered that Morsi and 35 others be put on trial. The charges included “committing crimes through the communication with foreign organisations and groups outside the country, such as the Palestinian Hamas movement, the Lebanese Hezbollah and the Iranian Revolutionary Guard, in order to prepare for terrorist operations inside Egyptian territory.” The defendants deny all the charges and regard them as politically motivated.

The Cairo Criminal Court began hearing the case on 16 February, 2014, issuing verdicts on 16 June, the following year. Morsi was sentenced to 25 years in prison, as was Muhammad Badi, leader of the Muslim Brotherhood, Saad Al-Katatni, a former president of the parliament and 14 other senior officials in the group.

The same court sentenced 16 others to death, including the deputy leader of the Brotherhood, Khairat Al-Shater, Mohamed Beltagy and Ahmad Abd Al-Aaty. Two others were sent to prison for seven years.

An Israeli soldier prevents a Palestinian child from entering a street in the Old City of Hebron on July 14, 2017

BETHLEHEM (Ma’an) — Israeli forces detained 13 Palestinians, seven of them minors, during raids in the occupied West Bank, including East Jerusalem, between Sunday and Monday, Palestinian and Israeli sources said.

In the northern and central West Bank, an Israeli army spokesperson told Ma’an that two Palestinians were detained at the Zaatara checkpoint in the Nablus district, while two others were detained in the Salfit-area village of Kifl Haris, and another was detained in Deir Qaddis in the Ramallah district.
The Palestinian Prisoner’s Society (PPS) identified two Palestinians detained overnight as Nour Abd al-Aziz Mahmoud al-Asaad and Muhammad Abdullah Shaqur, without specifying where they were detained.
In the Bethlehem district, the army said four Palestinians were detained in the village of Tuqu.
PPS said the four were minors, identifying them as Muayyad Abdullah al-Umour, Muhiyi Ahmad al-Umour, Muamin Ibrahim al-Umour, and Marwan Kamal al-Umour.
PPS added that Israeli forces detained three Palestinians in Aida refugee camp, located adjacent to Bethlehem city, identifying them as Abd al-Hamid Hammam Abu Srour, Amr Ahmad Abu Srour, and Muhammad Rami Uweis.
Israeli police spokeswoman Luba al-Samri said in a statement that three minors were detained by Israeli border police over suspicions that they had thrown stones and Molotov cocktails at Israeli forces.
A video of the detention showed two small boys throwing stones with no visibly apparent target, before a border police vehicle arrives and officers run after the children, dragging them back to the vehicle.
Al-Samri added that the children’s fathers were summoned, and the young boys were then transferred to Palestinian security forces, who released them after their families paid a bail of 500 Jordanian dinar ($705) each — a significant sum, given that the minimum wage in Palestine is set at 1,450 shekels ($400).
In the Hebron district, the army said one Palestinian, identified by PPS as Baraa Moussa al-Kawazba, was detained in the village of Sair.
In East Jerusalem, the Wadi Hilweh Information Center told Ma’an that Israeli forces stormed the Ein al-Luza and Bir Ayoub areas in the neighborhood of Silwan after a vehicle used by Israeli security guards was hit and burned by a Molotov cocktail.
Israeli forces fired stun grenades and rubber-coated steel bullets “haphazardly” in the area and closed the main roads, the center said, without mentioning any detentions.
Israeli raids in Palestinian towns, villages, and refugee camps are a daily occurrence in the West Bank and East Jerusalem, with a biweekly average of 95 search and detention raids carried out over the course of 2016, according to UN documentation.
Prisoners’ rights group Addameer estimated that 6,128 Palestinians were held in Israeli prisons as of July, including 320 minors. 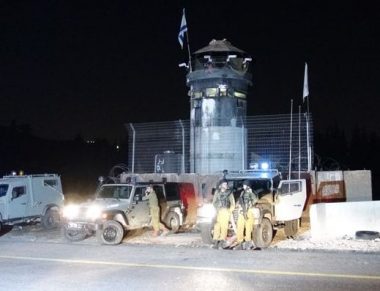 Israeli soldiers isolated, on Sunday at night, the al-‘Arroub refugee camp, north of the southern west Bank city of Hebron.

Local sources said the soldiers closed the three entrances of the refugee camp with iron gates, and prevented all cars from entering or leaving it.

The soldiers also interrogated many Palestinians, especially young men and teenagers, while inspecting their ID cards.

The army claims that stones were hurled at a car driven by an Israeli settler, near the main entrance of the refugee camp.

Israeli court at Ofer prison issued on Monday a 3-month administrative detention order against the Palestinian child Nour Issa, 16, who is from ‘Anata town to the northeast of Jerusalem.

Lawyer of the Palestinian Prisoner Society, Mahmoud al-Halabi, said that this order is the second of its kind against Issa.

He explained that Issa was previously sentenced to 4 months of administrative detention, and when the court decided to reduce the sentence to two months, the Israeli prosecution appealed the decision that was later cancelled.

Issa was scheduled to be released on 1st August after being arrested on 3rd April on charges of “incitement on Facebook”, but he was informed that his detention was renewed for extra three months.

An Israeli court on Monday extended the administrative detention order against a Palestinian prisoner, Muntaser al-Shunnar, from Nablus city in the northern West Bank.

The family of the captive told the PIC reporter that the illegal order was extended to four new months based on no charge or trial.

Detainee Shunnar, who is an engineer, was arrested after students’ union council elections had been conducted at an-Najah National University in the city. Few months later, his brother Asem was also rounded by Israeli occupation forces.

The Israeli police closed al-Aqsa’s gate of al-Maghareba shortly after 58 Israeli settlers showed up at the site and defiled its plazas.

Heavily-armed Israeli cops accompanied the Israeli settlers all the way through the break-in.