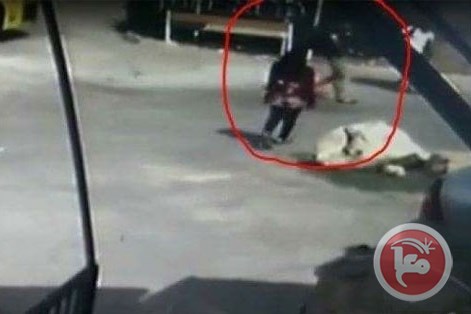 BETHLEHEM (Ma’an) — An Israeli soldier who fled from a 16-year-old Palestinian girl last week when she had carried out a stabbing attack at the entrance of an illegal Israeli settlement in the Jenin district of the occupied West Bank is reportedly facing dismissal from the army for failing to “engage” the teenager, Israeli media reported on Friday.

According to Israel Hayom, the army had said that “fleeing from terrorists, let alone a teenage girl, is unacceptable,” and has begun considerations over the dismissal of the soldier over the incident.
However, the incident is still under investigation, with a decision expected to be made next week, according to Israel Hayom. An Israeli army spokesperson was not immediately available to comment and provide more information on the investigation.
“The commanders see this as a very serious incident,” an Israeli commander from the soldier’s unit reportedly said. “Every IDF soldier, let alone a commando, is expected to engage. What if she had stabbed a little girl?”
Nuf Uqab Abd al-Jabar Infiaat was shot and critically injured after she stabbed and lightly wounded an Israeli soldier at the entrance of Israel’s illegal Mevo Dotan settlement in the Jenin district, and succumbed to her wounds a day later.
Footage was released depicting Israeli settlers insulting the young Palestinian as she lay wounded on the ground, calling her a “b*tch” and telling her she deserved to die — recalling a similar incident in 2015 when a video showed an Israeli man yelling “Die, son of a b*tch!” at a 13-year-old Palestinian boy who had just been shot and critically injured after an alleged stabbing attack.
Meanwhile, since 2016, when at least 109 Palestinians were shot and killed by Israeli forces and settlers, Elor Azarya was the only member of the Israeli forces to be charged with killing a Palestinian after being found guilty of manslaughter and sentenced to 18 months in prison, a year’s probation, and a demotion in his military rank for the filmed, execution-style shooting of 21-year-old Abd al-Fattah al-Sharif.
According to rights group Yesh Din, of the 186 criminal investigations opened by the Israeli army into suspected offenses against Palestinians in 2015, just four yielded indictments.
The last time an Israeli soldier was convicted of manslaughter took place in 2003 when Taysir Heib shot and mortally wounded British activist and photographer Tom Hurndall in the Gaza Strip.
Infiaat was one of 30 Palestinians to have been killed by Israelis since the beginning of 2017, ten of whom were minors and four were women and girls. In the same time period, seven Israelis have been killed by Palestinians.
Activists, and rights groups have denounced what they have termed a “shoot-to-kill” policy against Palestinians who did not constitute a threat at the time of their death, or who could have been subdued in a non-lethal manner — amid a backdrop of impunity for Israelis who committed the killings.
Meanwhile, a report released by Human Rights Watch earlier this year documented “numerous statements” made by senior Israeli politicians and religious figures “calling on police and soldiers to shoot to kill suspected attackers, irrespective of whether lethal force is actually strictly necessary to protect life.”
HRW noted that Israel’s shoot-to-kill policy has received widespread support among Israeli citizens, citing a 2016 poll by the Israel Democracy Institute which found that 47 percent of Jewish Israelis supported the sentiment that “any Palestinian who carries out a terror attack against Jews should be killed on the spot, even if he has been captured and clearly does not pose a threat.”
(Source / 10.06.2017)