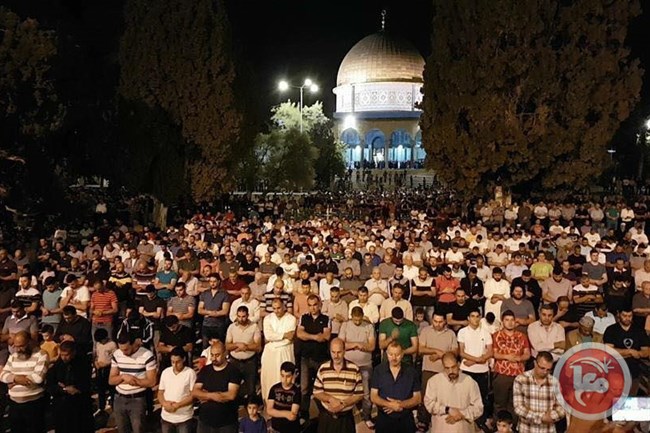 JERUSALEM (Ma’an) — A group of right-wing Israeli women dressed up in religious Muslim clothing reportedly attempted to pray at the Al-Aqsa Mosque in occupied East Jerusalem on Thursday evening, in contravention of agreements regimenting the holy site.

Security guards at Al-Aqsa said that eight women who entered the Al-Aqsa compound through the Cotton Merchants’ Gate dressed in Islamic outfits before the isha prayer on Thursday aroused their suspicions.
When the security guards went to speak with the women in Arabic, they only responded in Hebrew, outing them as Israelis.
The guards then evacuated the women from the compound, and informed the Israeli police of the incident.
There have been other reported instances of Jewish Israelis attempting to enter Al-Aqsa disguised as Muslims, despite non-Muslims being allowed on the compound.
Following Israeli annexation of East Jerusalem in 1967, however, Israel has maintained a compromise with the Islamic trust that controls the Al-Aqsa Mosque compound to not allow non-Muslim prayers in the area.
Israeli forces nonetheless regularly escort Jewish visitors to the site, leading to tension with Palestinian worshipers.
The Al-Aqsa Mosque compound, which sits just above the Western Wall plaza, houses both the Dome of the Rock and Al-Aqsa mosque. The third holiest site in Islam, it is also venerated as Judaism’s most holy place, as it sits where Jews believe the First and Second Temples once stood.
(Source / 09.06.2017)