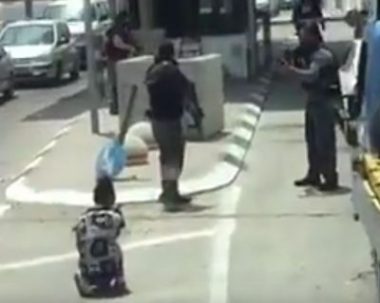 In what seems just second before a child was potentially shot dead, a Palestinian using his phone to film the unfolding events, can be heard shouting “hey you don’t shoot,” at a soldier pointing his automatic gun at a female child, who reportedly carried a knife.

The Israeli soldiers claimed that the child carried a knife, and was trying to cross the military roadblock, close to the entrance of Qalandia refugee camp, north of occupied East Jerusalem.

A video, captured by a bystander showed the child, 14, on her knees, motionless, and the voice of the person behind the camera can be heard shouting:

The child remains motionless, and the man is heard once again saying, “just don’t shoot her, cuff her…,” then he started shooting at the child, “just don’t move, remain as are, stay still.” Then the officers are seen cuffing the child, and a voice is heard saying “she has a knife in her bag.”

Many Palestinians have been recently killed just because the soldiers suspected they “intended to carry out a stabbing attack,” without even attempting to attack anybody. Her name remained unknown until the time of this report.

People witnessing the unfolding events said they were so concerned that the child was about to be killed although she was motionless, because the soldier kept aiming his rifle at her, while standing in a shooting position, ready to pull the trigger at any second.

In related news, the soldiers abducted a young man, identified as Mohammad Awad, from Aqbat as-Saraya, in the Old City of occupied Jerusalem, and moved him to an unknown destination.