Dozens of Palestinian families live with the constant threat of eviction by Israeli settler groups in the occupied city. 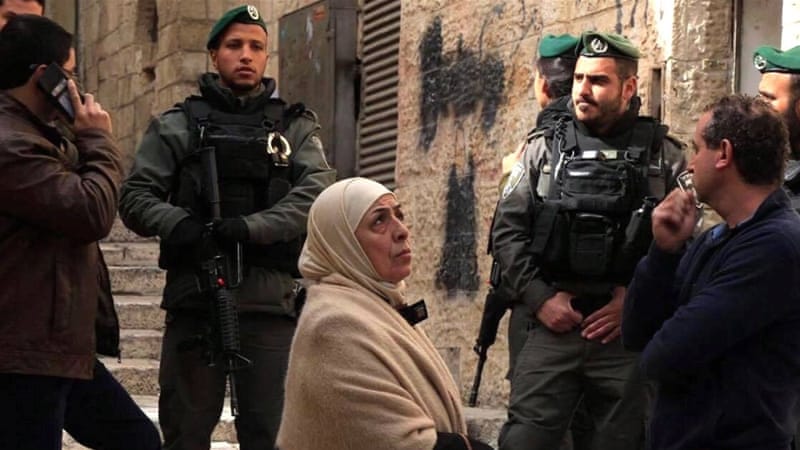 Occupied East Jerusalem – Ahmad Sub Laban gently peeled back the blinds covering a window in his home, revealing the golden Dome of the Rock in Al-Aqsa Mosque compound.

“If you look outside this window, you will understand exactly why the Israelis are targeting us with eviction,” he told Al Jazeera.

The Sub Labans are among at least 180 Palestinian families threatened with eviction by Israeli settler groups throughout occupied East Jerusalem, including 21 families in the Old City.

The Sub Labans are considered “protected tenants”, a status originating from an Ottoman-era law that guards against arbitrary evictions and establishes rent controls. After Israel’s annexation of East Jerusalem in 1967, the status was abolished, but for those who had already obtained it, the Israeli government issued the Third Generation Law, which strips Palestinians of the right after three generations of protected tenancy. 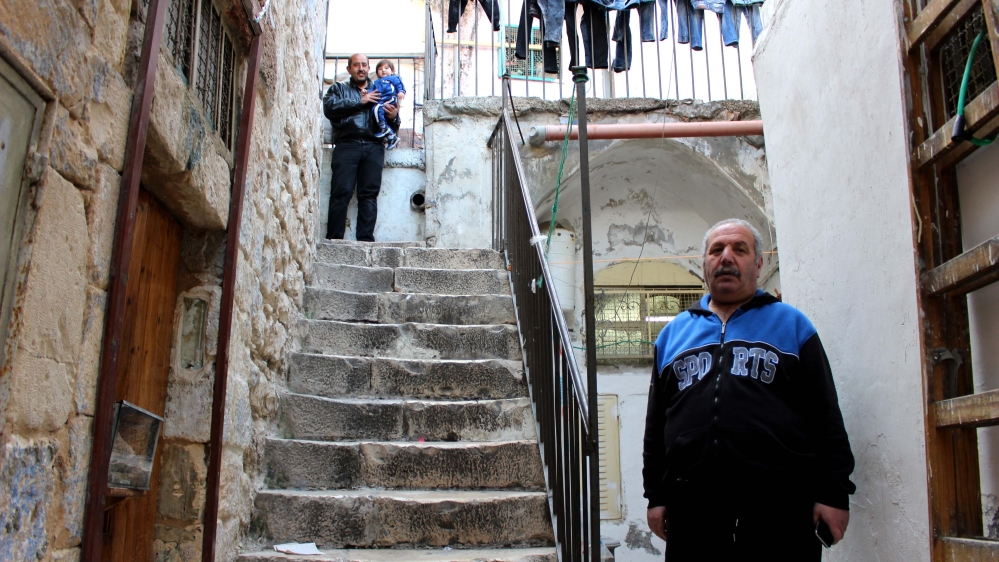 The conditions for maintaining protected tenancy are also extremely stringent; even renovating a small piece of an apartment could lead to revocation, said Daniel Seidemann, director of the nonprofit group Jerusalem Terrestrial. Hundreds of Palestinians in the city are protected tenants, according to a field researcher from the Jerusalem-based nonprofit organisation Ir Amim.

Some Palestinians with protected tenancy in the Old City say that Israeli settler groups have hastily moved to evict them after the death of the last member of their family’s third generation. Others say that their rights have been systematically eroded in the Israeli court system in an effort to increase the Jewish presence in occupied East Jerusalem.

Surrounded by Israeli settlers, the Sub Labans are the last Palestinians left in their apartment building in the neighbourhood of al-Khaldiya. The cobblestone steps outside their building lead to a large Star of David and a string of Israeli flags.

READ MORE: Sheikh Jarrah – When my enemy is my neighbour

The family received their latest eviction order in 2010, after being accused by Israeli settlers of not living in the apartment, which would nullify their protected tenancy agreement. The family vehemently denied the accusation.

Late last year, the Israeli Supreme Court concluded the decades-long property disputewith a controversial ruling: Nora and Mustafa Sub Laban, Ahmad’s parents, would be permitted to stay in their apartment for 10 years, but Ahmad, his wife, two small children and two siblings would be evicted.

“It’s like I am being held on death row,” Nora told Al Jazeera. “They have sentenced a piece of me to death, and now my husband and I have 10 years to wait in isolation for the day the settlers come to evict us.” 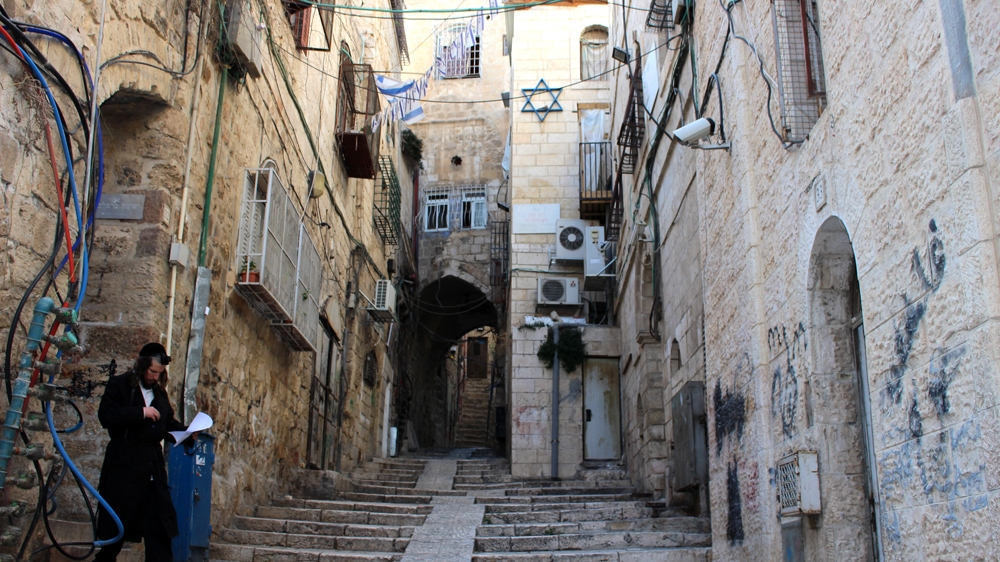 Ahmad said that his grandmother signed a rental agreement with the Jordanian government in 1953, making Nora the second generation of the protected tenancy. However, the Israeli court stripped the right from Ahmad and his siblings, who have continued to contest the decision, saying that they should be shielded from eviction as the family’s third generation.

“They revoked our rights in the Israeli courts,” Ahmad said. “This is an Israeli policy: use every possible means to remove Palestinian residents and replace them with Israeli settlers.”

The apartment building where the Sub Labans live had once been a trust for 19th-century Jews migrating from the Galicia region of Eastern Europe. Many of these properties were repurposed by the Jordanian government to house Palestinian refugees displaced from their villages after the 1948 war.

In 1967, the properties were transferred to Israel’s General Custodian. Several years later, Israel passed the Legal and Administrative Matters Law, allowing Israelis to claim property in East Jerusalem believed to have been owned by Jews before 1948.

The settlers who subsequently moved into the area arrived with a mentality to “take as much as they can from Palestinians”, Ahmad said.

Last year, Israeli settlers drilled several large holes into the wall of Ahmad’s children’s bedroom. The austere restrictions on home renovations for residents with protected tenancy has prevented the family from fixing the damage.

“They try to make life as difficult as possible for us,” Ahmad said.

Worlds away from the bustle of the Old City, Mazen Qerish lives in a new home in the East Jerusalem neighbourhood of Issawiya. He was evicted from the Old City last year after living there for nearly six decades.

Qerish’s apartment, which his grandfather first rented in 1936, had always been Palestinian-owned. But in 1987, the Palestinian landlord sold the property to a company affiliated with the settler organisation Ateret Cohanim, which works to increase the population of Israeli settlers in the city by facilitating property deals and establishing Jewish communities there, in violation of international law. Qerish says that the settler group then initiated a decades-long legal offensive to evict his family.

Ateret Cohanim’s executive director, Daniel Luria, denied the allegations, telling Al Jazeera that his organisation “doesn’t have anything to do with so-called ‘evictions’ in the Old City”. Qerish was removed from the building because “he no longer had any rights there”, Luria added. 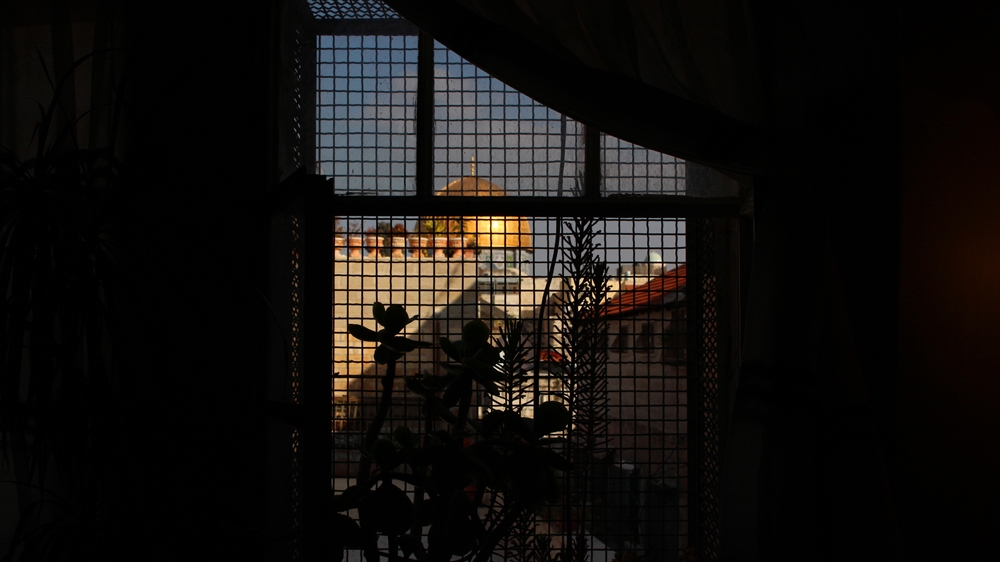 The judge ruled that she continued to have protected tenancy, but after her death in 2009, the family was thrown back into court. Qerish argued that he should be considered the third generation based on an old contract that referred to his mother as the second generation of the protected tenancy. In 2016, however, the Qerish family lost the case and was forced to leave the building.

“I never once thought I would not be living in the Old City,” Qerish told Al Jazeera. “I thought I had rights and that I was protected. My roots are connected there. My entire life was shaped in the Old City.”

The family has been under severe financial strain since the eviction, with their rent skyrocketing from $265 a year to $530 a month. In addition, the Israeli courts have fined them more than $71,000 for living in their home “illegally” since 2010.

But for Qerish, the most difficult part of the eviction has been the emotional impact. “I was in the middle of the world,” he said. “I had the markets, my friends and my neighbourhood. If I wanted to pray at Al-Aqsa, I could just walk outside my house and be there.”

Today, he often returns to his old neighbourhood of al-Saadiyeh and sets up a chair outside his former home. “Even though it’s a hard life living beside these settlers, I never wanted to leave my home,” he said. “The Old City is part of my soul.”

Across the street from the Sub Labans’ building, four other Palestinian families with protected status have also received eviction orders.

One resident, Sami Sidawi, told Al Jazeera that Israeli settlers claimed that his apartment was uninhabited – even though Sidawi has continued to reside there to care for his physically disabled sister. Sidawi and his sister are the last generation of protected tenants, he said.

And Abu Naser Kastaro, who lives in a small unit on the ground floor of the complex, said that his eviction order claims he lost the apartment in a 1982 court ruling – even though he had never been to court. He believes his case was confused with that of a previously evicted Palestinian family.

The remaining families live in fear that at any moment they could be evicted from their homes.

“I have lived in this apartment for my entire life, but we are seeing Palestinians being evicted from their homes all around us,” Kastaro told Al Jazeera. “Every time I see police on our street, I worry that they are coming to throw us out of the house.”