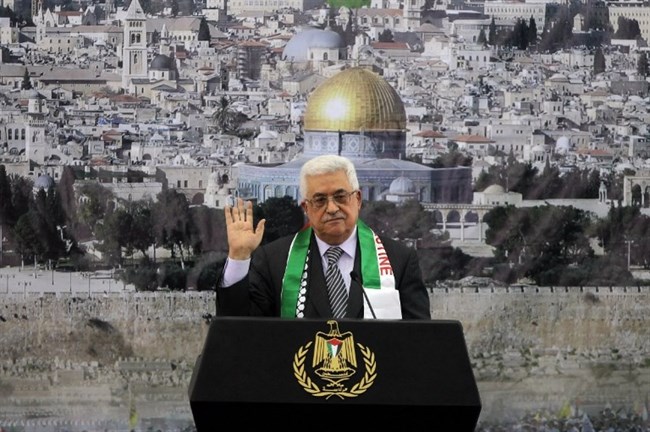 RAMALLAH (Ma’an) — The Palestinian presidential office released a statement Thursday underscoring the presidency’s rejections to the attack carried out in Tel Aviv Wednesday that left four Israelis killed and an additional six wounded.In a statement published on the government-run WAFA news agency, the presidential office underscored its rejection to the attacks, saying it “reiterated once and again that it rejects operations against civilians by any side, regardless of justifications”.“Achieving a just peace and creating a positive atmosphere will contribute to removing the reasons behind tension and violence in the area,” the statement read.The statement added that achieving a sustainable peace would require everyone to “stop any acts that would increase tension and strain, or that resort to violence.”Several Palestinian political factions also released statements in response to Wednesday’s attack, with the Hamas movement stating that the Tel Aviv shooting was a “good omen” for Palestinians and the first “surprise” for the “enemy” during the Muslim holy month of Ramadan.The Fatah movement, meanwhile, which is the leading party in the Palestinian Authority, said in a statement that the Tel Aviv shooting was an “individual and natural response” to Israeli state violence.“Israel must realize the consequences of its persistence to push violence, house demolition policies, forced displacement of Palestinians, raids by Israeli settlers to the Al-Aqsa Mosque compound, and the cold-blooded killing of Palestinians at checkpoints,” Fatah media committee head Munir al-Jaghoub said.Al-Jaghoub added that the Israeli refusal to abide by international agreements regarding its illegal settlement policy turned the situation in the in occupied Palestinian territory into a desperate reality far from Palestinians’ hopes and dreams of freedom and independence.The Popular Front for the Liberation of Palestine (PFLP) also released a statement saying that the shooting represented a “paradigm shift” in the Intifada, which it called a “natural response” to the high number of Palestinians killed by Israeli forces.The PFLP said that the site of the shooting, being close to the Israeli Ministry of Defense, sent a strong message of challenge to the newly appointed Minister of Defense Avigdor Lieberman, and stood as a confirmation that armed resistance was the best way to reclaim Palestinians’ rights.