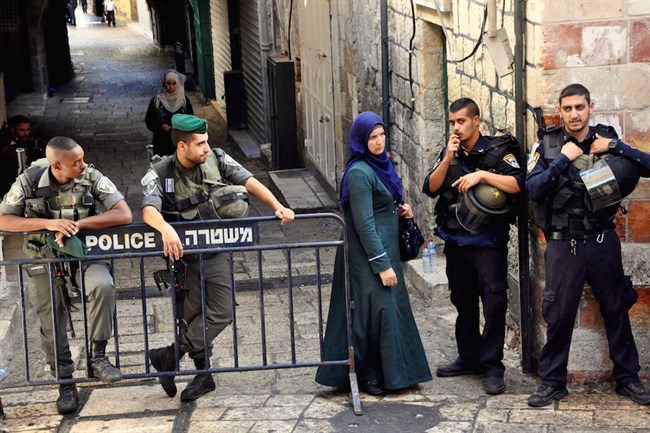 BETHLEHEM (Ma’an) — Israeli police detained on Monday night a young Palestinian suspected of being involved in a stabbing attack against an Israeli man in occupied East Jerusalem earlier that evening.Israeli police spokeswoman Luba al-Samri said that an 18-year-old Palestinian believed to be an accomplice in the attack was detained in Jerusalem’s Old City, and would be held for at least four days as part of the ongoing investigation.A 60-year-old Israeli man sustained minor to moderate injuries after being stabbed on al-Wad street in the Old City late on Monday evening.Israeli police shut down all entrances to the Old City in their searched for the suspected attacker after reportedly finding a knife on the scene.Eyewitnesses told Ma’an that Israeli forces closed all entrances to the Old City following the attack, and were preventing residents from entering and exiting the area.More than 200 Palestinians and almost 30 Israelis have been killed since the beginning of a wave of violence in October, characterized by a number of small-scale Palestinian attacks and alleged attacks against mainly Israeli military targets.The number of Palestinian and Israeli deaths saw a dramatic drop over the last two months, with the Israeli leadership suggesting its severe security measures are responsible for the emerging trend.However, the Palestinian Center for Policy and Survey Research found in a poll last month that support for stabbing attacks had seen a decline in the West Bank in recent months — “due, it seems, to a rising perception in its inefficacy.”