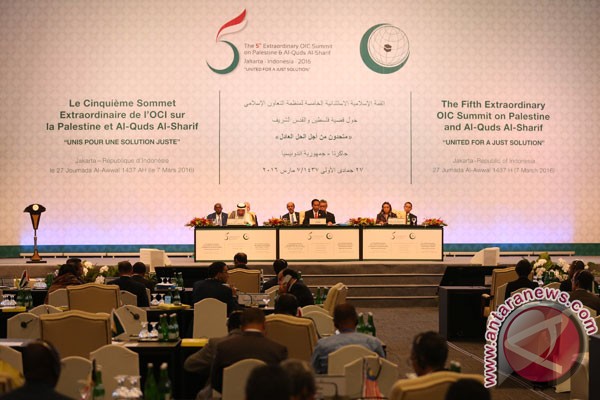 The Fifth Extraordinary OIC Summit on Palestine and Al Quds Al Sharif held in Jakarta, on March 6 and 7, 2016, produces Jakarta Declaration and Resolution. More than 600 delegates from 57 countries and two international organizations attended the Summit themed “United For A Just Solution”

Jakarta  (Antara News)- The Organization of Islamic Cooperation (OIC) has called for a boycott of products produced in or by illegal Israel settlements to pressure the Israeli Zionist regime to end its occupation of Palestinian land.

“Calling on the international community to support the boycott of products produced in or by illegal Israel settlements,” the OIC said in the 16th point of 23-point Jakarta Declaration issued at the conclusion of the Fifth Extraordinary OIC Summit on Palestine and Al Quds Al Sharif (Jerusalem), in Jakarta, on March 7.

The Declaration, which according to Indonesian Foreign Minister Retno Marsudi, comprises a number of concrete steps toward supporting Palestine in its struggle to gain independence, urges the United Nations Security Council (UNSC) to address the issue of illegal Israeli invasion and occupation in Palestine and provide international protection to the Palestinian people.

The OIC member countries also declare their plan to establish “an intergovernmental legal expert group to examine the ways and methods for referral of individual human right violations in Palestine to provide advocacy for the State of Palestine in international institutions and other legal mechanisms.”

They strongly reject the restriction of access to worship at Al-Aqsa Mosque and accuse Israel of trying to Judaize the Al Aqsa Mosque compound, including through spatial and temporal division at Al Aqsa, one of the Muslims holiest sites.

Israel has also endangered the foundation of Al Aqsa Mosque through illegal constructions and excavation around and beneath it, the Declaration said.

The Declaration has called for the unity of nations supporting Palestine, and in particular the unity of Fatah and Hamas factions in Palestine, to end the Israeli occupation, and to realize inalienable right of the Palestinian people and an independent and sovereign State of Palestine with Al Quds Al Sharif as its capital city.

The two-day summit themed “United For A Just Solution”, was participated in by 605 delegates from 57 OIC member countries and two international organizations.

The concrete steps agreed upon by the OIC through the Jakarta Declaration are to revive the peace process and the creation of a collective international process as well as involving Islamic countries to make a two-state solution a reality.

In fact, the Summit has produced two documents – the Resolution and the Jakarta Declaration, to give support for the Palestinian people who have been under the occupation of Israel for more than seven decades.

The Resolution commends the positions and efforts of the leaders of the OIC member states in supporting the cause of Al Quds and countering Israeli Judaization policies in the holy city.

It also calls for continuing the efforts at all fronts to end illegal and immoral Israeli blockage imposed on 1.8 million Palestinian people living in occupied Gaza Strip; as well as for reconciliation of Hamas and Fatah.

“History will record that leaders of the Islamic world sent a strong message to all sides involved in the Palestinian conflict. This Extraordinary Summit is proof of the tangible support for Palestine,” Indonesian President Joko Widodo (Jokowi) said in his closing remarks of the meeting.

He said the Islamic world still owes the Palestinian people their independence.

“The Palestinian struggle is our struggle. Insha Allah (God Willing), we will be able to witness Palestinian independence in our lifetime,” President Jokowi stated.

Earlier, in his opening remarks, Jokowi said Indonesia is consistent in its efforts to support Palestine in gaining its independence.

“In 1962, Indonesias founding father, the first president of the Republic of Indonesia, Soekarno, Bung Karno, stated that until the Palestinian people gain their independence, the Indonesian nation will stand against Israels colonialism,” President Jokowi stated.

Therefore, Indonesia along with other OIC member countries stand united to continue the unfinished struggle, he noted.

He has urged the OIC to be part of solution to Palestinian problem. “The OIC was set up to help Palestine so the OIC should be part of the Palestinian solution. If, its not, the OICs existence will no longer be relevant. Once again, not relevant,” President Jokowi said.

In the meantime, Palestinian President Mahmoud Abbas has called for international support to protect the Palestinian people and to end the more than seven decades long Israeli occupation.

“Our people need international support and protection to free ourselves from oppression by Israel, a country that has violated international laws and human rights the most,” Abbas said while speaking at the summit.

The Israeli aggression and cruelties in Al Quds (Jerusalem), the holy place for Muslims, Christians and Jews, has made Palestinians suffer as many of their homes were demolished by Israeli occupying force.

Israel also practiced economic imperialism against both Palestinian Muslims and Christians by imposing taxes that were too high and impeding investment opportunities, he stated.