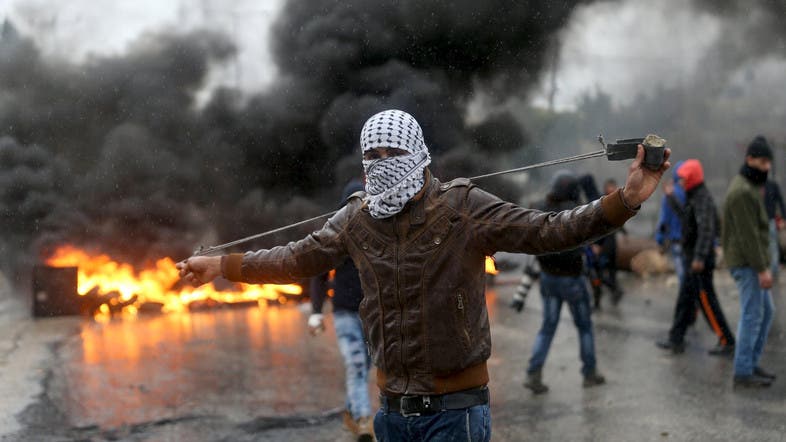 A Palestinian protester prepares his sling to hurl stones towards Israeli troops during clashes in the West Bank town of Qabatya, near Jenin February 6, 2016

The Palestinians on Thursday welcomed an initiative put forward by France to hold an international Middle East peace conference, a proposal which Israeli Benjamin Netanyahu has dismissed.

“We definitely welcome the French initiative, we see it as a major possibility for challenging the status quo,” Hossam Zomlot, an advisor to Palestinian president Mahmud Abbas, told reporters.

Zomlot, however, said the Palestinians insisted on their call for a United Nations resolution against Israeli settlement building ahead of any renewed peace process.

“Nothing will convince us that we should not go to the United Nations Security Council over settlements,” said Zomlot, who is a senior official in Abbas’s Fatah party.

France’s ambassador to Israel, Patrick Maisonnave, met Israeli officials this week to outline the initiative, which proposes setting up a support group of the permanent Security Council members, some Arab and European states and international organisations.

It would work in two stages, meeting first without the conflicting parties and then bringing them into the conference.

Netanyahu called it “mystifying” and counterproductive, arguing that the proposal gives Palestinians no incentive to compromise.

“It says, ‘We shall hold an international conference but, if it doesn’t succeed, we are deciding in advance what the consequence will be — we shall recognise a Palestinian state,’” he told reporters during a visit to Berlin.

“This of course ensures in advance that a conference will fail, because if the Palestinians know that their demands will be accepted… they don’t need to do anything,” he said.

The rightwing leader restated his position that peace could only come through direct negotiations between the two sides.

Palestinian officials have long argued for an international process to end Israel’s occupation and bring about a two-state solution.

U.S.-brokered peace talks collapsed in April 2014 and the prospects of fresh dialogue have appeared increasingly remote.