Russian air strikes killed at least 23 civilians and injured more than 35 people, including 10 children on Monday, when missiles hit a school and a children’s hospital in the opposition held Syrian town of Azaz in North Aleppo, and a hospital supported by French medical charity organisation, Doctors Without Borders, also known as Medecins Sans Frontieres (MSF) in the town of Idlib.

Civilians wounded by the continuous air strikes, targeting residential areas in Syria, were taken into Turkey through the Oncupinar crossing in Turkey, according to a civil defense member who spoke with an Anadolu Agency reporter. He said some of the victims were in critical condition.

Fourteen people were killed in the town of Azaz near the Turkish border when missiles slammed into a school sheltering families fleeing the offensive and the children’s hospital, two residents and a medic said.

The Russian jets also dropped cluster bombs and eight ballistic missiles around the road between Azaz and Al Salama.

Medic Juma Rahal said there were at least 2 children among those that had been killed in Monday’s bombing in Azaz.

“We have been moving scores of screaming children from the hospital,” said Rahal.

MSF reported that in a separate attack on Monday, “four air strikes in two series of at least two attacks within a few minutes of each other” hit an Idlib hospital, which is supported by the organisation.

At least nine people were killed and many civilians were wounded in the hospital. According to MSF, at least eight staff members are still missing.

The Syrian Observatory for Human Rights said that a suspected Russian fighter jet hit the hospital and a child is among the dead.

An MSF spokesman confirmed that a hospital, supported by the aid group, was struck in Maaret al Numan, about 280 kilometres north of Damascus, but a death toll has not yet been released.

The organisation said in a tweet that the destruction of the Idlib hospital left around 40,000 people without medical service and the assaults were a deliberate attack on the health structure. 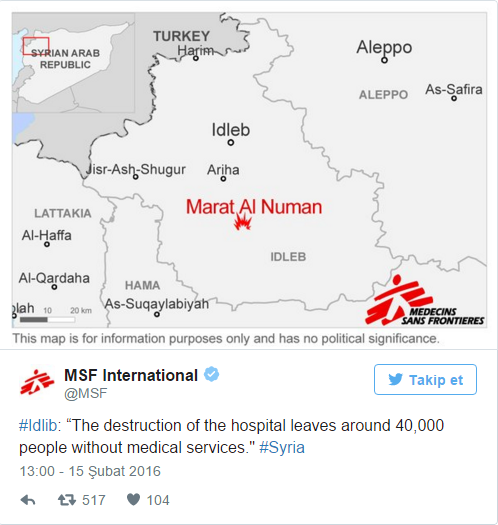 Shortly after the attack on the MSF hospital, an official from the organisation blamed Russia and the Assad regime.

“The author of the strike is clearly … either the government or Russia,” he said, adding that it was not the first time MSF facilities had been targeted in the country. The organisation supports around 150 hospitals in Syria.

Turkish Prime Minister, Ahmet Davutoglu, immediately slammed the Russian ballistic missile attack on the school and the hospital in Syria, during his visit to Ukraine.

A sea launched ballistic missile is seen unexploded on the soil at a olive grove after Russian warships, anchored near Latakia Port, launched 8 ballistic missiles in Azaz District of Aleppo, Syria on February 15, 2016

“More than 300 million people died in Syria.” Davutoglu said. “What Russia is trying to do is put pressure on the European Union through Turkey.”

Davutoglu also said that Russia and the Kurdish YPG militia had closed the humanitarian border, north of the Syrian city of Aleppo, and that Moscow’s aim was to leave the international community with just two options in Syria: President Bashar al Assad or DAESH and added that Turkey would continue to retaliate against the YPG, whose positions the Turkish Army has shelled over the border in recent days, if it continued its assault on the town of Azaz.

Tens of thousands of people have fled to the town, the last opposition stronghold before the border with Turkey, from towns and villages where Syrian regime and Russian air strikes keep hitting.

Russian got involved in the Syrian war in September 2015 to help Syrian regime leader Bashar al Assad’s forces and are frequently blamed for targeting opposition held regions rather than DAESH-held territories, killing civilians as well as the sanctions fighting Assad forces.

A Russian Foreign Ministry official was cited on Monday by Russian sources saying that Russia will continue its air strikes around Aleppo even after a possible ceasefire agreement in Syria.

A series of peace talks was set to be held in Geneva on February 25 aimed to begin a dialogue between Bashar al Assad’s regime and the Syrian opposition. But, last week UN envoy for Syria, Staffan de Mistura, postponed the talks to February 25, as aerial bombings by Russia and the Syrian regime intensified in Syria, days before the peace talks.