HEBRON (Ma’an) — The life of a young Palestinian woman who was shot and killed by Israeli forces on Saturday could have been saved if she had had access to medical treatment, a law official said on Sunday.Kilzar al-Uweiwi, 18, was killed by Israeli soldiers in Hebron after stabbing an Israeli soldier and a Palestinian bystander near the Ibrahimi Mosque in the occupied West Bank city of Hebron.Ashraf Mishal, the head of the public prosecution in Hebron, told Ma’an that an autopsy revealed al-Uweiwi had been shot three times — once in the elbow, once in the chest, and another bullet went through her lung and settled in her neck.Mishal said al-Uweiwi could have survived the shots if she had not been left bleeding to death.

“The forensic physician identified a massive pulmonary hemorrhage as the cause of Kilzar’s death, and it would have been possible to save her life if she had had medical treatment,” he said.The forensic report’s conclusion comes amid criticisms by rights groups that many Palestinians killed by Israeli forces in recent months did not pose sufficient threat for the use of lethal force at the time of their death.Over 170 Palestinians have been killed by Israeli forces and settlers since a wave of unrest spread across the occupied Palestinian territory in October.The unrest has been marked by a surge of small-scale attacks carried out by Palestinian individuals — predominantly on Israeli military targets — which have left over 25 Israelis dead, with the majority of suspected Palestinian attackers shot dead on site.The Hebron area in particular grew as the epicenter of upheaval during the months of November and December, and over 40 Palestinians have been killed in the district since recent unrest began, during attacks and clashes.The checkpoint near the Ibrahimi Mosque where Saturday’s stabbing took place is located in Hebron’s Old City, which has been designated as a “closed military zone” by the Israeli army since November.Palestinian residents of the area have had to register under a number system in order to pass through the Old City’s nearly 20 military checkpoints, and locals have reported heavier restrictions imposed by the army that Israeli rights group B’Tselem has referred to as “draconian measures.”UN Secretary-General Ban Ki-moon last month said that it was “human nature” for Palestinians to react violently to Israel’s decades-long military occupation, and urged change in Israel’s policies in the occupied area.
(Source / 14.02.2016)

The French government has cancelled its order for unmanned aerial vehicles (drones) from the Israeli weapons manufacturer Elbit, AlKhaleejonline.com reported on Sunday.

Quoting Israel’s Channel 10 TV, it said that France had “capitulated” to European boycott pressure, “even for military products.” The boycott, divestment and sanctions (BDS) movement in France apparently collected 8,000 signatures on a petition against the government’s deal with the Israeli company.

The BDS campaign demanded that France should cancel the purchase of the drones because they were used by the Israeli army “to kill civilians” in the Gaza Strip. 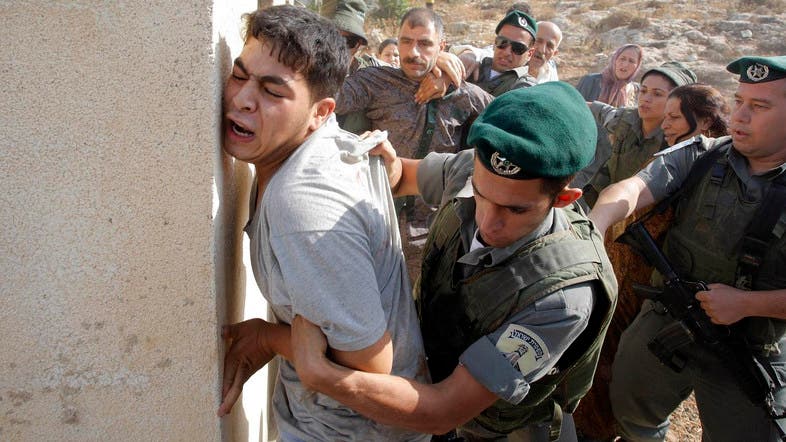 The U.N. human rights investigator for Gaza and the West Bank called on Israel on Thursday to investigate what he called excessive force used by Israeli security against Palestinians and to prosecute perpetrators.

“The upsurge in violence is a grim reminder of the unsustainable human rights situation in the Occupied Palestinian Territory and the volatile environment it engenders,” he said in a final report to the Human Rights Council.

“The report reflects the one-sidedness of the mandate and its flagrant anti-Israel bias. It is this one-sidedness which has made the rapporteur’s mission impossible to fulfil, hence his resignation,” spokesman Emmanuel Nahshon said.

Wibisono announced his resignation from the independent post last month, effective March 31, accusing Israel of reneging on its pledge to grant him access to Gaza and the West Bank.

Wibisino said on Thursday the upsurge of violence came against a backdrop of “illegal” Jewish settlements in the West Bank, including East Jerusalem, construction of a wall, and Israel’s blockade of Gaza that amounted to a “stranglehold” and “collective punishment”.

Israel must address these issues to uphold international law and ensure protection for Palestinians, he said.

About 5,680 Palestinians were detained by Israel as of the end of October 2015, including hundreds of minors, Wibisono said, citing figures from the Israeli human rights group B’Tselem.

Regarding those under administrative detention, he said: “Hundreds of Palestinians being held, now including children, often under secret evidence, and for up to six-month terms that can be renewed indefinitely, is not consistent with international human rights standards.”

“The government of Israel should promptly charge or release all administrative detainees.” 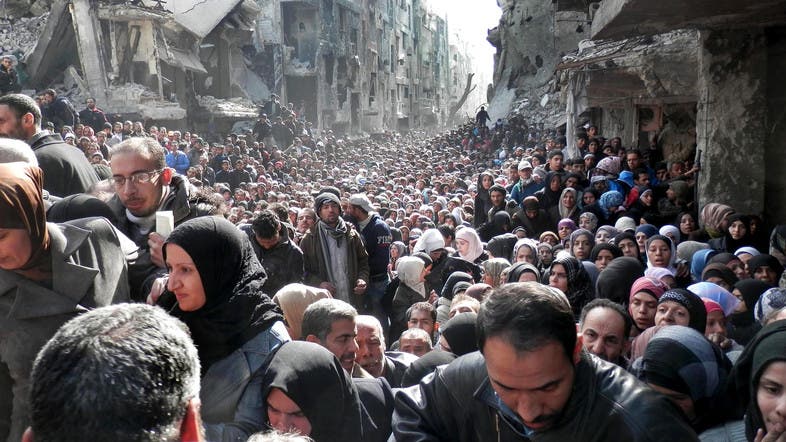 In this Jan. 31, 2014 file photo released by the U.N., residents of a besieged camp queue to receive food supplies, in Damascus, Syria

n five years of civil war, 400,000 Syrians have been killed and another 70,000 have perished due to a lack of basics such as clean water and healthcare, the Guardian newspaper reported on Thursday.

With those injured in the conflict, that amounts to more 11 percent of the population, it said, citing the Syrian Centre for Policy Research.

A U.S.-led coalition is trying to destroy Islamic State of Iraq and Syria (ISIS)  militants in Syria and wants President Bashar al-Assad to go. But Russia and Iran are propping up Assad and oppose the opponents of Assad who are being supported by the West its Arab allies such as Saudi Arabia.

About 400,000 of the deaths were directly due to violence, while 70,000 died because they didn’t have proper healthcare, medicine, clean water or housing.

Israeli forces opened fire at a Palestinian vehicle claiming it was heading fast at them near the Maale Adumim settlement east of Jerusalem on Saturday.

Stroke symptoms have appeared on the body of hunger-striking journalist Mohamed al-Qeiq and his health condition has become extremely critical, the Palestinian commission of detainees and ex-detainees quoted doctors in HaEmek hospital as saying.

The Egyptian authorities on Saturday morning opened the Rafah border crossing exceptionally for two days for the travel of Palestinians with humanitarian cases.

The Israeli Occupation Forces (IOF) demolished nearly 70 Palestinian facilities within 48 hours in the Jordan Valley. Locals said on Friday that most of the demolished facilities were donated by the EU to Palestinians in the area as part of its humanitarian aid.

PALESTINE POST is brought to you by Middle East Rising in collaboration with Khamakar Press, Days of Palestine and Free Palestine news.

The Shenstone site along with 3 other Elbit-owned factories were successfully shut on the 6th July 2015, to commemorate the first anniversary of Israel’s 2014 bombardment of Gaza

Affinity Flying Services Ltd, a joint venture in the UK owned 50-50 by Elbit and US-based Kellog, Brown and Root (KBR), “won a contract from the UK Defence Ministry’s military flight training programme worth about 500 million pounds over 18 years.”

The programme, according to Reuters, “is aimed at delivering aircrew training for the 21st century.” Affinity, a subcontractor, “will provide systems and training infrastructure and maintenance and logistics support services.”

Responding to the news, Elbit Systems CEOButzi Machlis said: “We are very proud to take part in such an important project for the UK MOD [Ministry of Defence].” According to Machlis, “the United Kingdom is one of Elbit Systems’ primary markets.”

Industry publication ‘Defense News’ described the deal as “a substantial win for KBR and its Israeli partner”, noting that “Elbit already has a footprint in the UK, most notably as Thales UK’s partner in the supply of the Watchkeeper UAV program to the British Army.”

Elbit Systems is a long-standing target of human rights campaigners. According to activists, the company “has profited greatly from supplying the Israeli military with a variety of equipment used to sustain Israeli occupation of the Palestinian people.”

An article published by Vice in 2014, as Israel was bombarding the Gaza Strip, stated that Elbit had “several weapons systems currently being used by the IDF” in its offensive. Others have described Elbit as a “notorious war profiteer”, with its shares rising 6.6% after ‘Operation Protective Edge’.

In the video, an Israeli soldier pushes a disabled man in a wheelchair backwards, flipping over the man and his wheelchair. Two more Palestinians rush to the disabled man’s aide, while Israeli forces charge forward at other bystanders, shooting off a stun grenade.
The video shows Israeli forces attacking and threatening Palestinians who were attempting to get near Yasmin al-Zarou, who was shot near an Israeli checkpoint in Hebron city.
(Source / 14.02.2016)

The Israeli occupation prevented a Palestinian ambulance from evacuating the girl, leaving her bleeding for a long time

Witnesses told Days of Palestine that the girl has just crossed the Israeli military checkpoint, referred to as 160, when an Israeli soldier shot her with five live bullets.

The girl was critically wounded and left bleeding for a while before she was evacuated by an Israeli ambulance to an unknown place.

Palestinian ministry of health said that the Israeli occupation refused to allow a Palestinian ambulance to evacuate her, leaving her bleeding while in a critical condition.

Family sources named the girl as Yasmin al-Zarou, stating that she is only 13 years old. They refuted the Israeli claim that she attempted to stab an Israeli soldier.

“Her sister was walking with her and she was surprised with her collapsing after hearing the sound of five bullets,” Yasmin’s mother told Days of Palestine.

A wouldn’t it be nice to get on with me neighbours
But they make it very clear?
They’ve got no room for ravers?
They stop me from groovin’, they bang on me wall?
The Small Faces 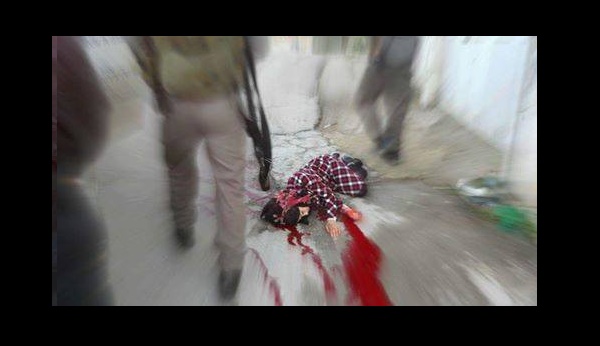 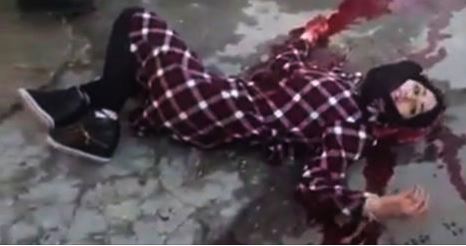 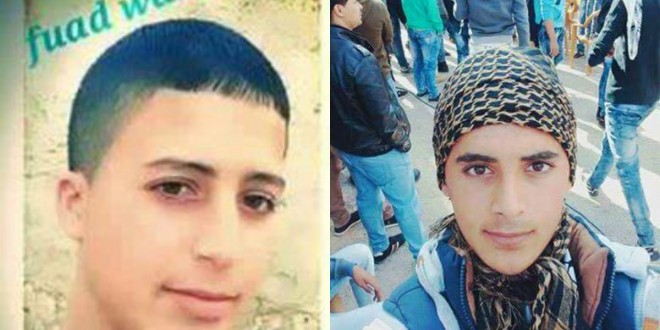 Currently, each household in Gaza has electricity only four hours a day

Electricity in Gaza has been only eight hours a day since around ten years, when the Israeli occupation imposed a strict siege on the coastal enclave.

During cold waves, the Israeli occupation and Egyptian authorities cut the electricity supplies to let the Gazans have only one or two hours a day. They claim that the supplies are cut due to technical problems.

Currently, the GEDCO distributed the electricity schedule, stating that the longest time each household will have electricity is four hours each day.