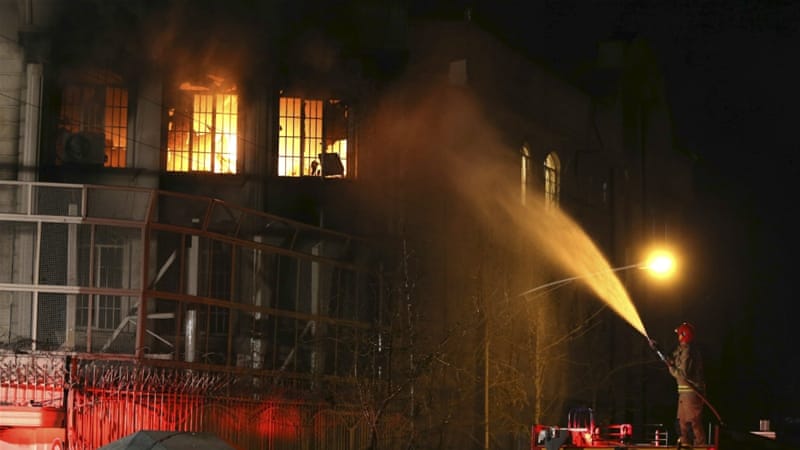 The verbal tit-for-tat between regional powerhouses Saudi Arabia and Iran continued on Tuesday after Riyadh’s diplomatic missions were attacked following the kingdom’s execution of 47 people, including a Shia cleric.

Rouhani’s comments were the latest in an escalating diplomatic spat between regional heavyweights Iran and Saudi Arabia that has raised international concerns over peace efforts to end the wars in Syria and Yemen, with both nations supporting opposite sides.

Meanwhile, Saudi Arabian Prince Waleed Bin Talal – a renowned billionare businessman – said on Twitter he is putting a halt to business projects and investments in Iran.

Riyadh severed relations with Iran on Sunday after its embassy in Tehran was set ablaze during protests against the executions.

But Saudi Foreign Minister Adel Aljubeir said  on Tuesday the dispute will not hinder political negotiations over the Syrian conflict expected later this month.

“The recent tensions .. will not affect … the operations that United Nations carries out alongside the international community to achieve a political solution in Geneva soon,” Saudi news agency SPA quoted Jubeir as saying, after talks with UN special envoy for Syria Staffan de Mistura.

John Sfakianakis, an economist and former advisor to the Saudi government, told Al Jazeera that Riyadh and Tehran must take the necessary precautions to avoid a further escalation.

“Both sides are aware of each other’s red lines,” he said.

Protests continued in Bahrain, which is among anumber of states in the region that severed ties with Iran in solidarity with Saudi Arabia.

Kuwait recalled its ambassador from Iran on Tuesday and Bahrain announced a ban on flights to and from the country.

Sfakianakis also warned against the potential economic impact that the dispute could inflict.

“For both sides, dropping [oil] prices are not good news as well as for other oil-producing countries,” he said.

“Market forces do determine prices but – in the eyes of Riyadh – Iran is not helping to increase the prices when they announce they will flood the market with one million barrels whenever the [international] sanctions are lifted.”