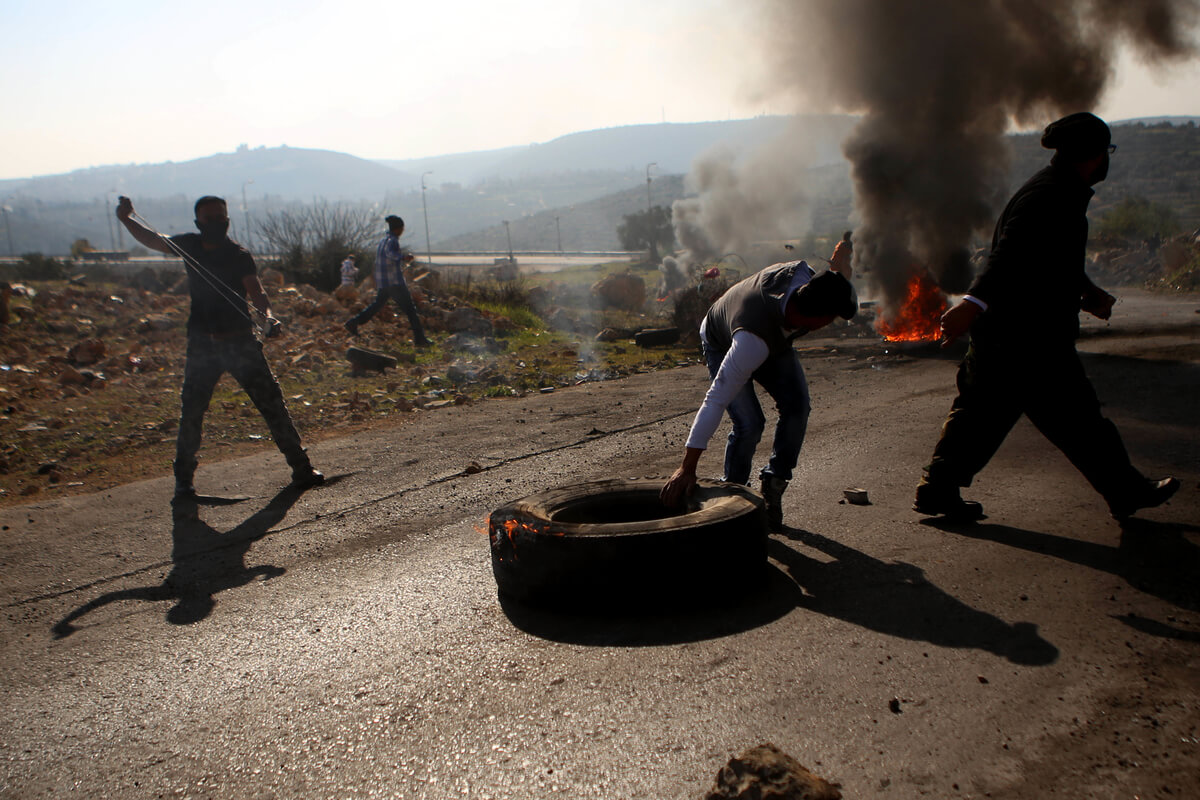 A Palestinian protester burns tires during clashes between Palestinian youth and Israeli army on in the occupied West Bank village of Silwad, northeast of Ramallah after a demonstration to call for the return of the bodies of killed alleged Palestinian attackers, December 11, 2015

For the first time since the weeks leading up to the second Intifada in 2000, a majority of Palestinians believe the current intensified violence will build into a full scale Intifada with greater potential to achieve their goals than peace talks with Israel, said a report published on Monday by the Palestinian Center for Policy and Survey (PCPS), the West Bank’s leading independent pollster.

Overall 66 percent of Palestinians anticipate that an armed uprising will take place, and by the same two-thirds margin, Palestinians also support knife attacks on Israelis. Of the attacks and alleged attacks in which Israeli security forces shot Palestinians, 47 percent believe there was no stabbing or attempted stabbing by the alleged Palestinian assailant.

By contrast only 18 percent believe a non-violent popular uprising will be launched from the current confrontations.

Sixty-eight percent of Palestinians polled say that their leaders should abandon the Oslo Accords, the 22-year-old bilateral agreement that was made with the goal of a Palestinians state. Yet two-thirds said they did not think Palestinian President Mahmoud Abbas will suspend it, despite a pledge in recent weeks that his government is no longer obligated to follow the pact.

Palestinians generally interpret an end to the Oslo Accords as an official end to security coordination with Israel. The survey showed most Palestinians did not believe Abbas would take this step. Two-thirds surveyed think Abbas opposes the unrest. Even so a majority of Palestinians believe that Abbas’s political party and ruling faction Fatah support the confrontations.

Yet it is Abbas’s rival party Hamas that is viewed as the most supportive of an Intifada in the making with 71 percent of respondents viewing the Islamist group that governs over the Gaza Strip as supportive of the current confrontations. However, this has not translated into expanding Hamas’s popularity beyond its political base, around one-quarter of Palestinians. The poll found if new presidential elections were held tomorrow, a candidate from Hamas would win—unless imprisoned Fatah leader Marwan Barghouti were to run as a Fatah candidate. The survey suggests that Palestinians would elect a leader from Hamas over Fatah, because of a growing disappointment and distrust of Abbas rather than a belief in Hamas’s political program.

Of those who think an Intifada is on the horizon, the “Oslo Generation” aged 18-22 are the strongest supporters. They are defined as the most secular of those polled and most opposed to the current Palestinian leadership.

The survey was conducted between December 10th and 12th, interviewing 1270 adults from the West Bank and Gaza with a margin of error of 3 percent. The findings follow two and a half months of unrest across Israel and the occupied Palestinian territory.

While it is still unclear how long the confrontations will continue, or if they will escalate and cause major changes to the static political climate, the survey results suggest changes on the ground could follow the shift in public opinion, favoring an uprising for the first time since the last Intifada of 2000-2005, according to the director of the PCPS Dr. Khalil Shikaki.

“In the mid-90s there was very little support for violence achieving national rights,” Shikaki said at a briefing in Ramallah on his survey’s results. Popular backing of an uprising remained low until just two months before the outbreak of the second Intifada. The sea-change in public opinion was quick. Fifty-six-percent thought an Intifada was close to starting in July 2000. Today already two-thirds of Palestinians believe an uprising is in early stages.

“Based on what we have seen in the last two to three months, it is clear that we are not likely to see a reversal in the current confrontations any time soon,” Shikaki said. “There will be an escalatory process, and it will be gradual. I think this could be the case but only after a lengthy period of time. This could be a year or two.”

Part of the reason Shikaki sees a slower start to a potential full-on intifada is that “the emotional part”—the killings of large number of Palestinians—are taking place at a fraction of the rate at which they took place at the outset of the last uprising (on average nearly one killed every other day) . He thinks these numbers have kept the masses of Palestinians from protesting against Israel.

“At the initial start of second Intifada, ten Palestinians were killed per day,” said Shikaki. “Israel is acting in a much more constrained matter in terms of shooting at the Palestinians—keeping emotional levels down.”

At the same time the Palestinian political parties are less involved in launching an uprising than during the last two Intifadas. In the first uprising factions instigated demonstrations and boycotts. In the second uprising they ordered and coordinated attacks and bombings against Israelis. Today these groups are less powerful. In the current confrontations, local branches of political parties have mounted protests against Israel; however, the bulk of the steering is done by student groups and networks of youth over social media. As for the knife attacks, those have exclusively been carried out by individuals unaffiliated with the Palestinian political sides.

“My guess is that Abbas will lose control,” Shikaki said, estimating Palestinian security forces will not be able to keep pace in thwarting attacks against Israelis if they progress. “At the end of next year, he won’t be able to control use of fire arms or planned attacks.”

“The escalation does not need the participation of large numbers of people,” Shikaki warned. “Most of the incitement that the Israelis are talking about is not actually from the Palestinian Authority, it is from social media.” Indeed, 85 percent of the Oslo Generation said they get their news from social media, according to the poll.