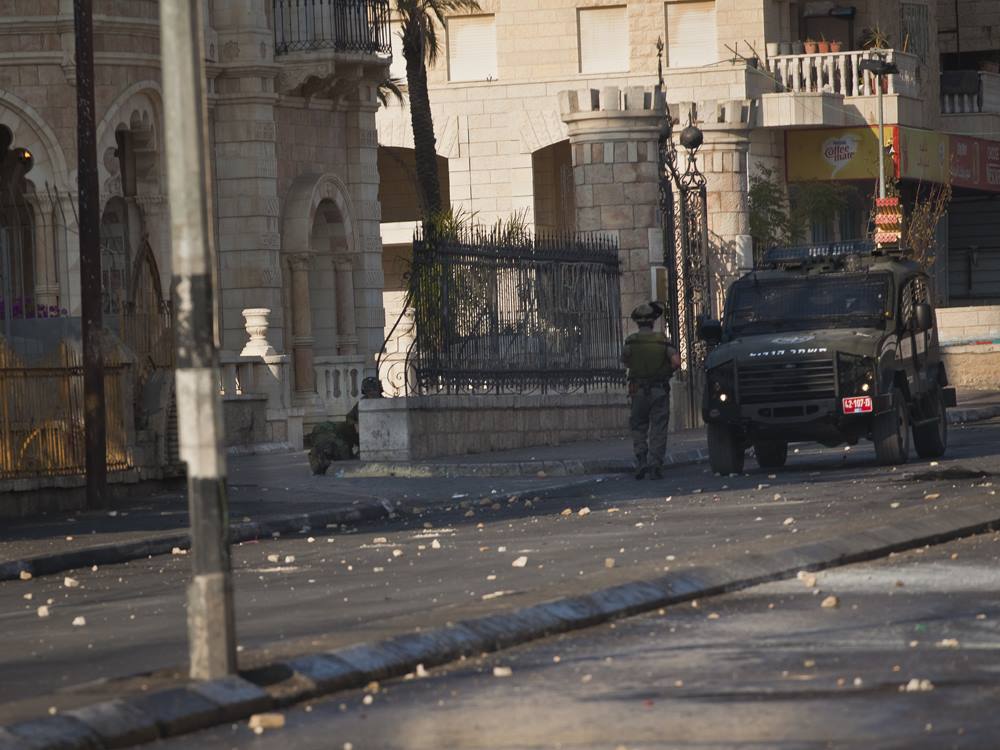 Palestinian-Canadian artist Rehab Nazzal, whose art has addressed themes and experiences of Palestinian political prisoners and extrajudicial assassinations, was shot in the leg with live ammunition by Israeli occupation forces while photographing in Bethlehem, in the West Bank of occupied Palestine.  Nazzal is a third-year Ph.D. student at Western University in Ontario, where she is investigating the sonic effect of unmanned robotic weapons and surveillance systems on civilians as part of her research.

Samidoun Palestinian Prisoner Solidarity Network expresses its solidarity with Rehab Nazzal, whose art highlights Palestinian existence and experience, and views the shooting of Nazzal as part of an ongoing occupation war of violence and suppression against Palestinian cultural workers, artists, journalists and photographers. As she notes, “This was not an accident.”  It is not separate from the attempts of Zionist organizations in Canada to silence and suppress her artwork and render Palestinian experience and struggle “invisible” and silenced, but part of an ongoing campaign of violence and repression against Palestinian cultural and media voices.

We reprint the following press release in response to the attack on Nazzal:

At approximately 2:00 PM on Friday December 11, Rehab Nazzal was carefully walking along Al Khalil Street, a main avenue in the north of the Palestinian city of Bethlehem, towards where she usually stands with other journalists and photographers. She wanted to document a military “Skunk” truck that spays chemicals with a strong sewage smell. Nazzal, a third year PhD student in Western’s Visual Arts Department who holds a SSHRC Doctoral Scholarship to investigate the sonic effect of unmanned robotic weapons and surveillance systems on civilians, has been documenting the clashes between the Israeli occupation forces and the Palestinian protesters since the beginning of October. Her research focuses on the effect of the Israeli weapons that target human senses: sound bombs, teargas and Skunk chemicals. Rehab’s work has been exhibited nationally in Canada, as well as internationally.

She reports what happened to her on Friday: “While walking, I would take shelter every few meters to avoid the teargas and the “Skunk” army truck that was spraying sewage chemical liquid on the protesters and the surrounding neighborhoods. When I stopped by a corner of one of the shops, and while taking some photographs, I was suddenly shot in the leg. I did not realize what had happened. The last image I photographed shows a sniper hiding on the ground near the entrance to one of the city’s hotels.” (View Nazzal’s photo, above.)

When an ambulance rushed to her aid, it was attacked with teargas grenades, which suffocated the paramedics and Nazzal, creating a cloud of gas that prevented other photographers and journalists from documenting what was happening. Examination at the hospital revealed that a bullet had entered and exited her leg, fortunately without shattering any bones. Nazzal reports that she is now fine, getting the necessary medical help and will soon recover. The wound was identified as being from a .22 caliber bullet, a type of ammunition that is prohibited for live fire against unarmed civilians, according to Israeli human rights organization B’Tselem.

“What shocked me was the fact that I was alone, with no clashes, no stone throwers, absolutely no one around me, and yet I was intentionally shot by a sniper. This was not an accident,” comments Nazzal. Dar Al-Kalima University, where she is lecturing while in the West Bank for her research, sent an official letter about this to the Canadian Embassy in Tel Aviv.

Award-winning London-based artist Jamelie Hassan, who exhibited with Nazzal last year at a gallery
in London, Ontario, comments: “Rehab’s photographic and mixed media installations are significant and powerful works that reveal the structures of occupation and on-going impact of the Israeli occupation on the daily lives of Palestinians. It is vital in this sort of research-based work for artists to be able to document with photography the reality they are studying. I am shocked by this violence against a fellow Canadian artist, and concerned not only for her safety but also for the safety of many other Palestinian journalists and media professionals who are put at risk by the reckless violence of the occupation’s military.”