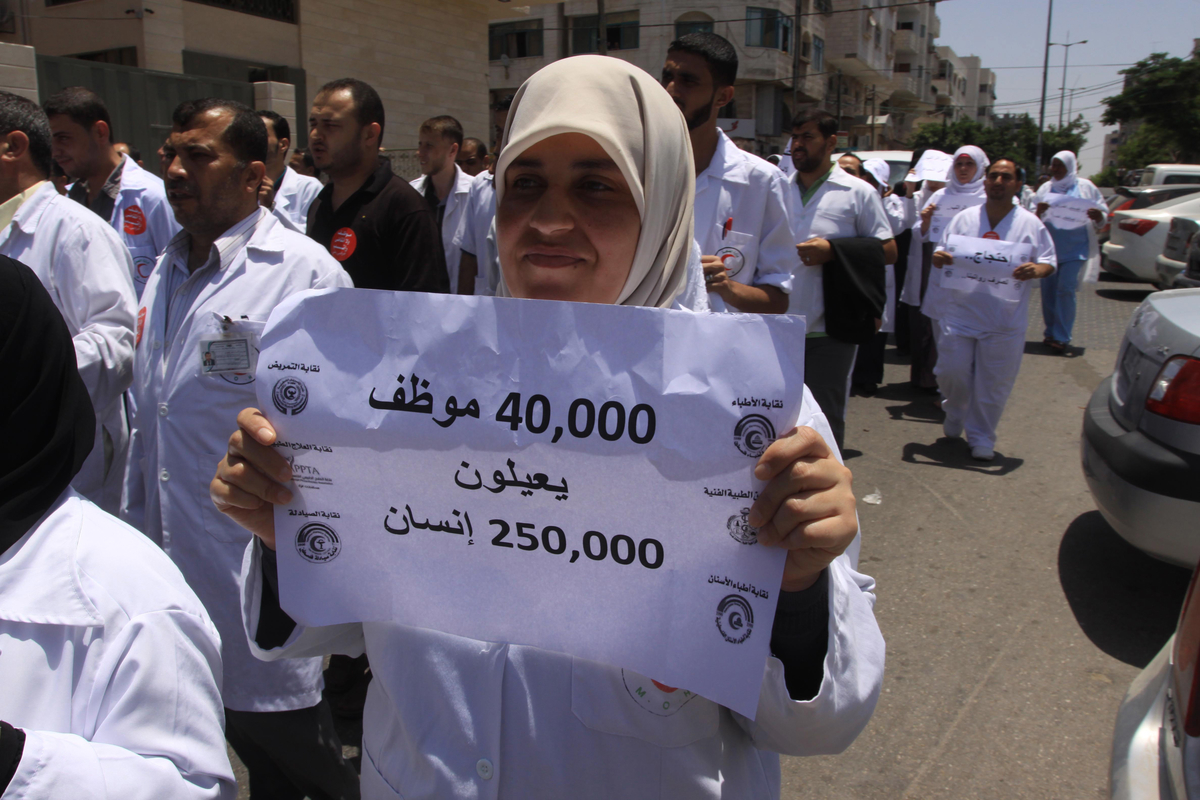 Since Israel began withholding funds to the Gaza Strip following the Hamas victory in the 2006 Palestinian legislative election, the payment of Gaza public sector employees has been a bone of contention between the rival Palestinian parties and a driver of internal unrest in the Gaza Strip. Despite promises from the national consensus government, more than 50,000 government workers in Gaza have not received their regular salaries since early 2013. Now, as anger is rising, Hamas is proposing a solution that is already proving controversial.

Along with the closure policy Israel maintains on the Gaza Strip, the salaries crisis has deteriorated economic and social conditions. Many workers in Gaza cannot repay their debts and experts warn of the negative political and social repercussions of the situation.

Sumaia Madi, works as a nurse in one of the government clinics in Gaza city, and feels that she and her peers, have been politically blackmailed and manipulated through the Palestinian political polarization. “I am a mother of five children whose lives are based on my work and what I should have earned from it to meet their essential needs,” Sumaia said, who instead of receiving her salary at the end of every month, receives a meager payment of less than $200 every three months.

Hussam Saied can’t pay his debts to the grocery store next to his home. “Wherever I meet [the store owner], he keeps asking me to repay my debts which have exceeded $900 so far,” Saied said. “This problem has turned my life into a living hell. I used to be a financially independent person, but things have got out of control making me socially and financially insecure person,” Saied added.

Moreover, the overall economic situation in Gaza is worsened by the unpaid salaries since this has decreased the overall purchasing power. In response, the investment sector is expected to be paralyzed as there is not sufficient public demand. Ahmed Khier ran three separate clothes shops in the past. Now he has closed down two of them as less customers come to knock on his doors. “My work has been severely curtailed, people can barely feed their children. Stylish clothes have become a luxury thing these days,” Khier said.

When Israel started withholding funds from Gaza Hamas government workers were denied their salaries, but the Palestinian Authority continued paying the salaries of its 70,000 workers who were no longer working. The contrast in policy between the two groups became a source of the internal tension in Gaza.  Thus, Hamas has been focused on finding a way to pay its government employees to mitigate the rise of the social and economic tension.

On November 22, Hamas Political Bureau member Ziad al-Zaza announced that public employees will receive their entitlements through land distribution, and their municipal and electricity debts will be reset.

Hamas said it conducted its own studies to test the feasibility of this proposal, though some politicians expressed doubt toward Hamas suggestion.

Ameera Deni, who works as a doctor in al Shifa hospital, was not happy with the solution. “The government should pay me the more than $30,000 I am owed, and instead they want to give me a piece of land in a remote area, what shall I do of it?!”, Deni asked.

On the other hand, Monna Suhail who works a janitor in the hospital was unclear what she thought about it. “I am exhausted, I want a solution at the end. Some people told me that I can resell it to earn money,” Suhail said.

Human Rights organizations based in Gaza welcomed the decision, and said all workers need to be reassured about their salaries very soon without prejudice based on political affiliations.