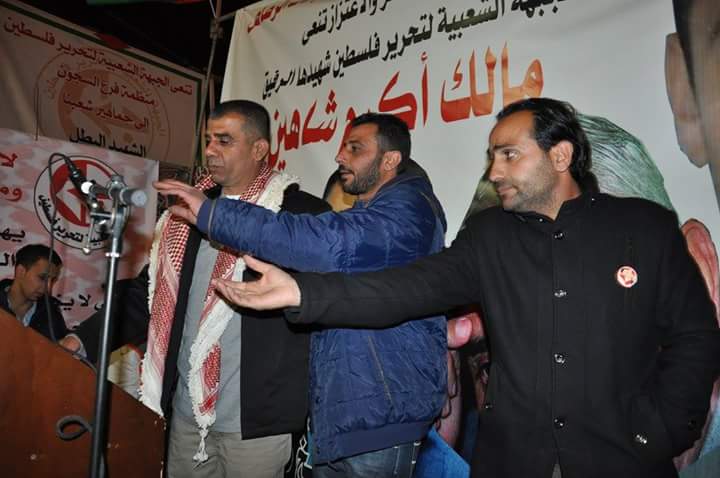 Nidal Abu Aker, formerly imprisoned Palestinian journalist, organizer and leader of the leftist Popular Front for the Liberation of Palestine in Dheisheh refugee camp was released from Israeli prison last night, 10 December. Abu Aker had been held under administrative detention; with his comrades Ghassan Zawahreh, Shadi Ma’ali, Munir Abu Sharar and Badr al-Ruzza, he launched the “Battle of Breaking the Chains”, a 40-day hunger strike in protest of the policy of imprisoning Palestinians without charge or trial.

Zawahreh, freed one week earlier, is the brother of Muataz Zawahreh, killed by Israeli occupation forces as he protested outside the camp in October. He joined the crowds of Palestinians welcoming Nidal Abu Aker home and free. Before attending a packed popular welcoming rally, where he gave a speech, Abu Aker visited the mother of slain Palestinian Malek Shahin, killed by occupation forces just days before when they invaded the camp in “arrest raids.” Shahin was a comrade of the Zawahreh brothers and Abu Aker in the revolutionary leftist Palestinian political party, the PFLP.

Abu Aker’s son, Mohammed, 20, was not present at the rally to welcome his father home because he is currently arrested by Israeli occupation forces, just weeks ago.