The United Arab Emirates (UAE) and Qatar have a unique opportunity to re-shape the future of post-Gaddafi Libya, but instead they are fuelling an insurgency in the North African region, US experts Giorgio Cafiero and Daniel Wagner note.

Since toppling of Libyan leader Muammar Gaddafi the UAE and Qatar have been struggling for power in Libya; according to US experts Giorgio Cafiero and Daniel Wagner the countries should shift their focus from “military issues to the diplomatic arena” in order to halt the ongoing strife in the region.

“Two Gulf Arab states, the UAE and Qatar, which both played pivotal roles in the Libyan uprising as sponsors of anti-Qaddafi rebels, have emerged as rivals in this grander geopolitical struggle,” Giorgio Cafiero, the Co-Founder of Gulf State Analytics, and Daniel Wagner, the CEO of Country Risk Solutions, narrate in their article for The National Interest.

‘Moderate’ Islamism? Washington, Brussels Playing With Fire in Syria, Iraq
Interestingly enough, the UAE, along with Egypt, backs the Tobruk-based government, while Qatar, together with Turkey and Sudan, takes the side of the Islamist-led government in Tripoli.”Abu Dhabi and Doha’s proxy war in Libya is illustrative of a division within the Gulf Cooperation Council (GCC), which is proving highly influential in shaping Libya’s post-Qaddafi political order,” the US experts emphasize.

Cafiero and Wagner call attention to the fact that the Brotherhood gained power in many countries through Arab Spring elections, prompting deep concerns among Gulf monarchs. 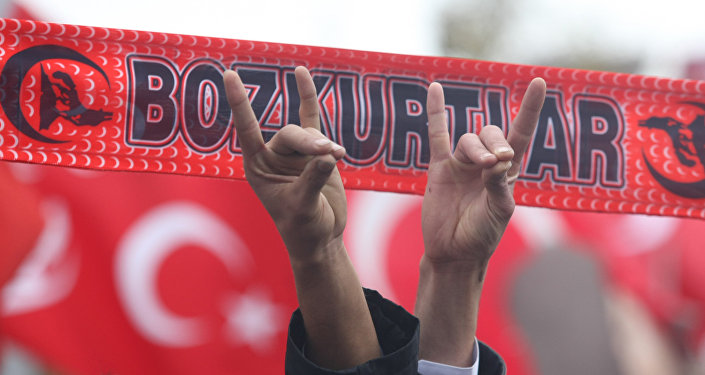 Are Erdogan’s Grey Wolves Terrorists Knocking on Crimea’s Door?
However, the US experts do not specify whether the Arab royals were concerned over the potential prospects of regime change in their realms or the Muslim Brotherhood’s radical Islamist agenda.While Qatar has sponsored the Brotherhood’s branches across the Arab world in order to spread Doha’s influence, the UAE and Egypt have cracked down on the Islamists.

As for Saudi Arabia, it “sits somewhere in the middle.” Still, in Syria, Saudi Arabia sided with Qatar backing Sunni Islamist rebels, including the Muslim Brotherhood, seeking to overthrow Bashar al-Assad, the US experts elaborate.

Cafiero and Wagner note that Qatar has had an active foreign policy agenda since 1995, when Sheikh Hamad bin Khalifa Al Thani toppled his father in a palace coup.

According to the experts, one of Qatar’s political instruments is the pan-Arab satellite network Al-Jazeera.

“Al-Jazeera’s coverage of other Arab nations’ affairs prompted several Arab regimes to criticize the network as early as 2002,” they point out.

Quoting WikiLeaks, the experts note that in 2009 the UAE’s Crown Prince Mohammed bin Zayed called Qatar a “part of the Muslim Brotherhood” during a meeting with US officials.

As the Brotherhood has gained ground both in Libya and Syria, the UAE has decided to launch an air strike campaign against the Islamist group in Libya.

“The extent to which the UAE has committed itself to countering Islamist groups in Libya was underscored in August 2014, when Emirati pilots flying out of bases in Egypt carried out strikes against Islamist militants seeking control of Tripoli.”

The US experts argue that the Gulf countries should reach a mutually beneficial compromise and halt their proxy war in Libya. They insist that the UAE and Qatar have a unique chance to re-shape the future of post-Gaddafi Libya.

But what about the Muslim Brotherhood and its radical Islamist agenda? On the one hand, some US neoconservative decision-makers are inclined to regard the Brotherhood as the West’s “ally” in the MENA region.

For instance, the Brookings Institution reported in August 2015 that “the Syrian Muslim Brotherhood has become an important component of the western-backed Syrian opposition” (“Project on US Relations with the Islamic World”).

Back in 2007, the influential Council on Foreign Relations’ mouthpiece even went so far as to claim the Brotherhood had eventually embraced elections and other “democratic features” and given up their jihadi fight.

At the same, a number of US Senators including Republican presidential hopeful Ted Cruz introduced a bill in November 2015 seeking to designate the Muslim Brotherhood as a “terrorist organization.”

The question remains open whether the legislation will be adopted.