With hospitals falling apart in the besieged territory, doctors cite a desperate need for funds and equipment. 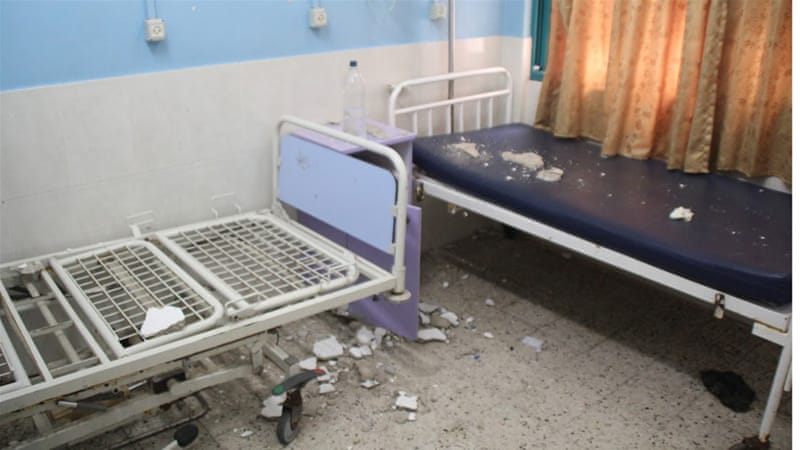 Gaza City – Zinat al-Jundi was in her bed in the maternity ward at Gaza’s al-Shifa hospital when chunks of cement and concrete began to fall on to a nearby bed, occupied by a mother who had just given birth.

“My roommate had just moved her baby to make the bed when a block of concrete fell, right where the baby was,” Jundi told Al Jazeera. “It was a miracle that we were not hurt.”

The debris fell into their room after the building’s concrete roof caved in last month, causing panic throughout the facility as it was evacuated in a hurry.

The incident, however, was far from unforeseen: Used daily by thousands of people, the 60-year-old building – part of the complex that makes up Shifa hospital – had long been showing signs of disrepair, as cracks crept into the walls and ceilings.

The roof cave-in at Shifa was just the latest manifestation of Gaza’s ongoing health crisis, as the besieged territory struggles to provide adequate care to its 1.8-million population.

Three of the five main buildings at Shifa are from the same era, and two are now collapsing: In addition to the obstetrics building, the internal medicine building was evacuated four months ago after engineers warned that a collapse was imminent.

The building housing Shifa’s maternity ward contained 93 beds and handled about 70 deliveries a day. Also in the building were a gynaecology ward, an outpatient clinic and a neonatal intensive care unit that received cases from throughout the Gaza Strip.

Two private hospitals in Gaza are now helping to manage the cases that otherwise would have been directed to Shifa.

Medhat Abbas, director general of the Shifa complex, told Al Jazeera that even before the cave-in, patients in the ward sometimes had to stay in the hallways due to overcrowding. Attempts were made to secure funding from international agencies for a new building, he said, but to no avail.

“We alerted everyone and provided situational updates,” Abbas said. “No one listened.”

Around $10m is needed to replace the two crumbling buildings at the Shifa complex, he added – but who would finance these projects remains unclear. Tens of thousands of former Hamas employees in Gaza have gone without their full salaries for months, and the consensus government in Ramallah has shied away from managing Gaza’s crises.

Even if funds were secured, progress could be further stalled by Israeli restrictions on building materials entering the territory.

Munther Ghazal, the managing surgeon at Shifa’s department of gynaecology and obstetrics, could not conceal his frustration at the situation.

“You cannot have patients, operation rooms and the neonatal ICU scattered at different areas across the city,” he told Al Jazeera. “This has to be temporary.”

READ MORE: The orphans of Gaza

The frailties of Gaza’s health sector are deep and diverse. One year ago, maintenance and cleaning companies went on strike after failing to receive their salaries, and the ensuing financial crunch forced hospitals to stop serving patients’ meals. Charity organisations stepped in to help fill the void.

Shifa’s old and rusty laundry machine stopped working more than a year ago, and since then, sheets, robes and gowns have to be carted 30km away each day to Nasser hospital for washing. Meanwhile, vacancies left by retiring employees have not been filled: For the past three years, there has been no significant, permanent recruitment in Gaza’s public sector.

Subhi Skaik, medical director at the Shifa compound, estimates that the hospital runs with 20 percent less staff than it needs – and smaller hospitals are probably suffering more, he added.

Gaza’s health ministry and the Palestinian Medical Council, which oversees training programmes, has offered new graduates the chance to fill these vacancies without pay in exchange for experience certificates and the possibility of employment down the road.

Dozens of people have taken advantage of the programme but, with no permanent solution on the horizon, dozens more have emigrated or are seeking a chance to leave Gaza.

INTERACTIVE: Gaza – A life under siege

Movement restrictions have led to a further deterioration in the quality of services in Gaza, Skaik told Al Jazeera.

“Medical education is a continuous process. We need scholarships and delegate exchanges to update our knowledge and improve our skills and experience,” he said. “Dozens of doctors lost grants of higher education because they were not able to join their programmes in time … Nonetheless, we hold regular conferences and have resorted to online lectures with foreign experts and tutors.”

Several specialties, such as pediatric cardiac surgery and radiation therapy, are missing from Gaza hospitals altogether, either due to a lack of specialists or a lack of equipment, forcing patients to be transferred to Israel or the occupied West Bank.

Shifa’s Prince Nayef Oncology Centre, built in 2005 with a price tag of more than $5m, has yet to become operational due to an Israeli prohibition on equipment needed for radiotherapy and cancer diagnostics.

Jundi, the patient from Shifa’s maternity ward, said it is time for the government to step up: “I call on President Abu Mazen and everyone to save us … We have nowhere to go now.”