Israeli soldiers fatally shot, on Sunday at night, a Palestinian teen in Ein al-Louza neighborhood, in Silwan town, south of the Al-Aqsa Mosque in occupied Jerusalem.

Medical sources said the slain Palestinian has been identified as Ayman Sameeh al-Abbassi, 17 years of age, and that he was shot with a live round in his chest.

Clashes took place in different parts of the town, including Ras al-Amoud and Ein al-Louza, while the soldiers fired rounds of live ammunition, rubber-coated steel bullets and gas bombs. Many Palestinians suffered the effects of tear gas inhalation.

The soldiers also invaded Ein al-Louza Specialized Medical Center, and detained the medical staff in addition to inspecting the ID cards of many residents in the center.

They attempted to snatch the body of the slain Palestinian from the center, but the residents prevented them, and took him to his family home.

The army also invaded the residential building of Sami Rajabi, and searched several apartments, in addition to surrounding the al-Makassed and Augusta Victoria Hospitals, before searching all cars entering or leaving them.

Despite Israeli military restrictions, the funeral of al-‘Abbassi was held at midnight, with the participation of hundreds of Palestinians.

The residents marched from his home towards the graveyard in Sweih neighborhood, while carrying Palestinian flags and chanting for the liberation of Palestine, and the release of all detainees. 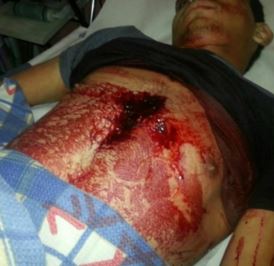