TULKAREM, (PIC)– Six Palestinians were injured by Israeli live bullets including two in serious conditions, while over fifty others choked on tear gas in clashes with Israeli forces at Khadouri University in Tulkarem.
Local sources told the PIC reporter that the clashes erupted in the wake of Israeli storming of the university and abusing of its students who confronted Israeli soldiers by stones and empty bottles.
Israeli troops assaulted Palestinian students during the clashes. Classes were called off at the university which has been recently witnessing many raids by Israeli occupation forces, the sources pointed out.
(Source / 29.11.2015)

Israeli news outlets claimed a Palestinian youth stabbed and wounded a border cop in his neck before he was shot by the occupation soldiers and killed right on the spot.

A statement released by the Palestinian health ministry confirmed the piece of news, adding that Sunday’s murder brings the toll of Palestinians killed by the Israeli troops since early October to 105, including 23 children and four girls.

Later the casualty was identified as 38-year-old Bacim Salah, a native of Nablus province.

Moments ago in the provincial capital of the Dara’a Governorate, the Syrian Arab Army’s 5th Armored Division – in coordination with the National Defense Forces (NDF) of Dara’a City – imposed full control over 8 building blocks in the Dara’a Mahata Quarter after a series of intense firefights with the Islamist rebels of the Free Syrian Army’s “Southern Front Brigades”.

According to a military source inside the city of Dara’a, the Syrian Arab Army’s 5th Armored Division and their allies seized 8 building blocks that were situated to the east of the College of Physicians and directly south of the Dara’a Bus Station; these aforementioned sites are all located near the strategic Dara’a National Hospital that is located at the southern sector of the Dara’a Mahata Quarter.

In addition to their advance at the Dara’a Mahata Quarter, the Syrian Arab Army’s 5th Armored Division is also advancing towards the imperative city of Busra Al-Sham after imposing full control over the village of Khirbat Samar in southwestern Sweida.

Should the Syrian Armed Forces recover the historical city of Busra Al-Sham in southeastern Dara’a, they will be in position to recapture the border-crossing into Jordan and several little villages that lead to Al-Jiza and Al-Hirak.

JERUSALEM (Ma’an) — Israeli forces shot dead a Palestinian man on Sunday after he allegedly stabbed and injured an Israeli police officer near Damascus Gate in occupied East Jerusalem, an Israeli police spokesperson said.Micky Rosenfeld said the alleged attacker was a 38-year-old Palestinian from Nablus district in the northern occupied West Bank. Local sources named him as Baseem Abdul-Rahman Mustafa Salah.The Israeli police officer who was injured during the attack is reportedly in light to moderate condition, a Magen David Adom medical service spokesperson said.Witnesses near the scene told Ma’an that Israeli police shot the Palestinian man at least 11 times during the incident, adding that Israeli forces did not allow medics to reach him.At least 100 Palestinians have been killed since the start of last month. Many were killed during alleged attacks on Israeli military and civilians, although Palestinians and right groups have disputed that a number of these cases actually were attacks.The attacks that have taken placed have killed 19 Israelis in the same time period.

Violence since 1 October has left 100 dead on the Palestinian side, as well as 17 Israelis

Israeli police shot dead a Palestinian teenager in Jerusalem on Sunday night after a day of violence in the city left two people wounded and an attacker killed.

The bloodshed, and the closure of a Palestinian radio station accused of incitement, came with Israeli security forces struggling to halt two months of Palestinian knife, gun and car-ramming assaults.

Several weeks ago, an Israeli security crackdown in Jerusalem, including roadblocks in Palestinian neighbourhoods, was followed by a lull in attacks in the city, but violence has returned.

An Israeli police statement said that officers fired at a Palestinian holding a petrol bomb in the Ras al-Amud neighbourhood after they came under attack from a volley of the missiles, but they could not confirm hitting him.

“About 10 petrol bombs were thrown at border police officers in Ras al-Amud,” the statement said.

“The force, whose lives were in immediate danger, fired at the lower body of a suspect who was seen with a petrol bomb in his hand,” it added. “A hit could not be definitely identified.”

In response, several Palestinian activist groups in Jerusalem, such as Fatah’s youth movement, have called for a “day of rage and mourning” on Monday.

“We call for an escalation against the occupation in wake of the murder and execution of the martyr Abasi,” said Fatah’s youth movement in a statement.

From the group’s perspective, the day of rage is an “adequate response to the Israeli government’s ongoing policy of executions against the Palestinian people.”

The attacker was identified as Bassem Salah, 38, from the northern West Bank city of Nablus.

Later, a foreign woman of around 30 was lightly wounded in a stabbing near a bus stop in west Jerusalem and the attacker fled.

Violence since 1 October has left 100 dead on the Palestinian side, as well as 17 Israelis, an American and an Eritrean

“In the last eight months ISIS has managed to sell … $800 million dollars worth of oil on the black market of Turkey. This is Iraqi oil and Syrian oil, carried by trucks from Iraq, from Syria through the borders to Turkey and sold …[at] less than 50 percent of the international oil price,” Mowaffak al Rubaie said in an interview with RT.

“Now this either get consumed inside, the crude is refined on Turkish territory by the Turkish refineries, and sold in the Turkish market. Or it goes to Jihan and then in the pipelines from Jihan to the Mediterranean and sold to the international market.” 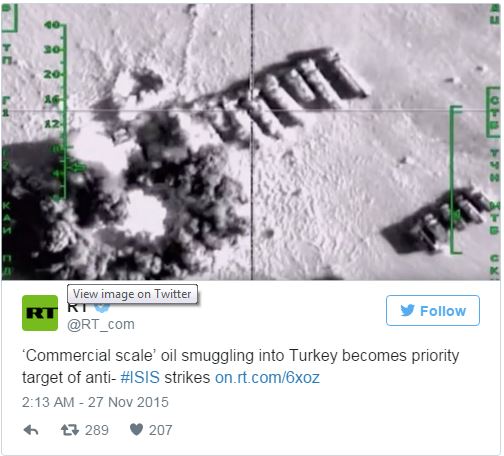 “Money and dollars generated by selling Iraqi and Syrian oil on the Turkish black market  is like the oxygen supply to ISIS and it’s operation,” he added. “Once you cut the oxygen then ISIS will suffocate.”

The Iraqi MP said there is “no shadow of a doubt” that the Turkish government knows about the oil smuggling operations. “The merchants, the businessmen [are buying oil] in the black market in Turkey under the noses – under the auspices if you like – of the Turkish intelligence agency and the Turkish security apparatus,” he said.

Citing Iraqi intelligence services, Mowaffak al Rubaie also accused Turkey of providing medical treatment to terrorists in hospitals along the border and at times even in “Istanbul itself.”

Russia considers ISIS oil smuggling operations to be one of the highest priority targets in crippling the terror group’s finances and capabilities. Moscow has long been requesting that Ankara properly addresses reports of its alleged involvement with ISIS oil smuggling.

President Putin himself noted that it was “hard to believe, but it is theoretically possible” that the Turkish leadership knows nothing about oil flowing into Turkey illegally. However he noted that the operations are too daring and obvious to ignore.

“Vehicles, carrying oil, lined up in a chain going beyond the horizon,” said Putin, comparing the views seen by Russian pilots and drones to a “living oil pipe” stretched from ISIS and rebel controlled areas of Syria into Turkey. “Day and night they are going to Turkey. Trucks always go there loaded, and back from there – empty,” Putin said earlier this week.

The Palestinian health ministry said in a statement that Mohammed al-Abbasi, 17, was fatally shot in his torso during confrontation in Ras al-Amoud and transferred to a clinic where he was pronounced dead.

Eyewitnesses reported violent confrontation in the neighborhood after a number of firebombs were hurled at a settlement outpost, adding that Israeli forces fired rubber-coated and live bullets at Palestinian protesters one of which hit Abbasi.

Local sources said that Israeli occupation forces encircled the clinic and tried to kidnap the boy before he was announced dead.

More than 70 Palestinians were injured on Sunday in confrontations with the IOF soldiers in the West Bank provinces of Tulkarem and el-Bireh in addition to occupied Jerusalem.

The shooting of Abbasi raised the number of children killed by IOF since the 1st October to 23.

The Israeli judge refused to listen to the family defence, saying that the demolition of the house would be ‘a gift to the state of Israel’

According to family sources, the two apartments are the third and fourth floors of a five-story building and they house 13 people

According to the court, the house was allegedly built without have the necessary permits from the Israeli authorities.

Siyam family, owners of the house, said the two apartments, which were ordered to be erased, were built 21 years ago, and over the time they have spent 600,000 shekels ($154,000) in fines to Israeli authorities, in addition to fees paid to obtain a license.

The Israeli judge gave the family two weeks to demolish the apartments themselves; otherwise, the family face demolition costs and a penalty fine and members of the family would be jailed for four months.

According to family sources, the two apartments are the third and fourth floors of a five-story building and they house 13 people.

Just two weeks ago, the family paid a fine of 25,000 shekels ($6,400) for the fifth floor, but the court was unconcerned by the fact that demolishing the third and fourth floors inevitably meant demolishing the fifth.

The Israeli judge refused to listen to the family defence, saying that the demolition of the house would be “a gift to the state of Israel.”

Millions of Shia Muslims from across the world are taking part in a march toward Iraq’s holy shrine city of Karbala to attend mourning rituals on Arba’een, which marks 40 days after the anniversary of the martyrdom of Imam Hussein (PBUH), the grandson of Prophet Muhammad (PBUH).

The pilgrims show their commitment to the Shia imam by walking tens of miles barefoot. Pictures coming out of Iraq show mourners clad in black, walking toward Karbala, which lies 80 kilometers (50 miles) south of the capital, Baghdad, to commemorate Arba’een, which in Arabic means forty and falls on December 3 this year.

Shia Muslim pilgrims walk on a road leading to the holy city of Karbala to take part in Arba’een mourning rituals, November 26, 2015

The event attracts millions of Shia Muslims from Iran. Iran’s Police Second-in-Command Brigadier General Eskandar Mo’meni announced on Saturday that some 1.2 million Iranians have so entered Iraq on foot to attend the annual mourning rite.

A member of the Iraqi security forces stands guard as Shia Muslim pilgrims walk on a road in Baghdad’s Dora district on their way to the holy city of Karbala to take part in Arba’een mourning rituals, Iraq, November 27, 2015

Iraqi forces have tightened security to protect pilgrims against possible terrorist attacks ahead of the mourning rituals.

The northern and western parts of Iraq have been plagued by gruesome violence ever since Daesh terrorists began their campaign of terror in the country in June 2014. Army soldiers and Popular Mobilization units have joined forces and are seeking to take back militant-held regions in joint operations.

BRUSSELS, (PIC)– Palestinian ambassador to Belgium Abdul-Rahim al-Farra has said that the peace talks which do not respect the Palestinian people’s right to self-determination are useless.

Farra made his remarks in a speech during a ceremony organized on Saturday evening by the Belgian-Palestinian Friendship Association in Brussels in celebration of its 40th inception anniversary.

He stated that nothing of the pledges mentioned in all previous agreements between the Palestinians and Israelis, including the Oslo accords, had been fulfilled.

Farra, who is also an ambassador to Luxembourg and the European Union, affirmed that the Palestinians’ engagement in any coming peace talks would be conditional on recognizing their right to self-determination and a Palestinian state on the pre-1967 borders.