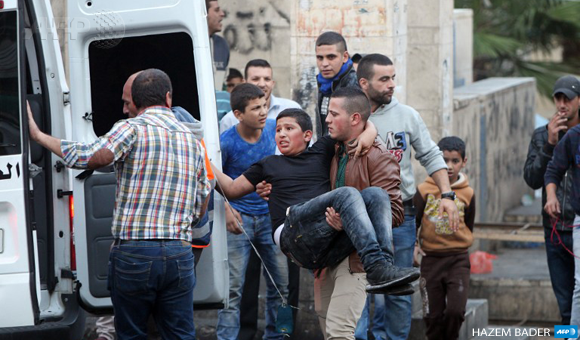 A Palestinian man carries a teenager injured during clashes between Palestinian protesters and Israeli forces in the occupied West Bank city of Hebron on October 28, 2015

Ramallah, November 24, 2015—Three Palestinian children were shot dead by Israeli forces while carrying out alleged stabbing attacks in separate incidents across the West Bank and Jerusalem over the past two days.

On Monday morning, two female cousins, identified as Hadeel Wajih Awwad, 13, and Nurhan Ibrahim Awwad, 16, carried out a stabbing attack near Jerusalem’s Mahane Yehuda market, wounding a 70-year-old fellow Palestinian with scissors. Security cameras showed an off-duty police sapper, or bomb disposal specialist, and a security guard knocking the girls to the ground, after which the police officer shoots them multiples times.

Hadeel died at the scene. DCIP spoke with Hadeel’s brother, Abed, who gave his sister’s date of birth as December 28, 2001. Nurhan sustained serious wounds and underwent surgery at Shaare Tzedek hospital in Jerusalem to remove two bullets from her abdomen, according to media reports. She remains in a critical condition.

Israeli forces also shot and killed Alaa Khalil Hashash, 16, on Monday, after he allegedly attempted to stab an Israeli soldier at the Huwara military checkpoint, south of the West Bank city of Nablus, the Palestinian news agency Maan reported. DCIP is still investigating the circumstance surrounding the incident.

Hashash was the second child killed near Huwara checkpoint in as many days. On Sunday, Israeli soldiers shot dead Ashraqat Taha Qatnani, 16, after a Jewish settler, identified as Gershon Mesika, ran his car into her. According to Israeli authorities, she was allegedly attempting to stab other settlers nearby. A witness told DCIP that he saw the girl chase after three teenaged settlers before the car hit her.

The Israeli human rights group, B’Tselem, translated Mesika’s Hebrew-language video accountof the incident: “I didn’t stop to think, I hit the gas and rammed into her, she fell down and then the soldiers came and continued shooting and neutralized her completely.”

“Security cameras and eyewitness reports in two of these incidents show the alleged child assailants no longer posed a threat when Israeli forces shot them multiple times at close range,” said Ayed Abu Eqtaish, Accountability Program director at DCIP. “While all states have the right to protect their citizens from violence, it cannot be used to justify extrajudicial killings or the unlawful use of intentional lethal force.”

Ashraqat and Hadeel were the third and fourth Palestinian girls killed while carrying out an alleged stabbing attack. On October 25, Israeli border police shot and killed Danya Jihad Irsheid, 17, after alleging she attempted to stab one of their officers at a military checkpoint near the Ibrahimi Mosque in the West Bank city of Hebron. Palestinian eyewitnesses disputed the Israeli account of the incident, according to news reports.

“She went through a metal detector. In the school bag, they found nothing and asked her, ‘Where’s the knife?’ She said, ‘I don’t have a knife.’ Then they fired between her legs. She was terrified and moved back half a meter or a meter,” a Hebron resident, standing next in line at the checkpoint, told CNN.

“She raised her arms in the air saying ‘I don’t have a knife.’ Then they shot eight to 10 bullets, but I don’t know exactly who was shooting. Then she fell on the ground.”

Also in Hebron, Israeli police said a female paramilitary border police officer shot dead a Palestinian girl after she allegedly stabbed her at the Ashmoret Yitzhak border police base on October 17. DCIP confirmed the girl was 16-year-old Bayan Ayman Esseileh.

Tensions across East Jerusalem and the rest of the occupied West Bank escalated into lethal attacks since the start of October. At least 93 Palestinians and 19 Israelis have died over seven weeks of violence. DCIP has confirmed 19 Palestinian child fatalities, all except four while carrying out alleged stabbing attacks.

Two other Palestinian children were killed in November during alleged knife attacks raising the total to five. On November 10, Israeli forces killed Sadiq Ziad Gharbiya, 16, at the “Container” military checkpoint, located at Wadi al-Nar, east of the West Bank town of Abu Dis, after he allegedly attempted to stab a soldier.

An eyewitness told DCIP that Ahmad and another Palestinian youth walked toward a Palestinian gas station near the checkpoint in the middle of the night. They asked to use the toilets. Five Israeli soldiers in a military jeep approached them and searched them at gunpoint. One of the soldiers grabbed Ahmad by the neck, when the others found a pocketknife with his friend. Ahmad managed to get away and took out his pocketknife, at which point that soldier fired at his legs.

The witness said that several military jeeps then arrived at the scene and ordered him to vacate the area. When he left, he saw Ahmad was still alive, on his knees, and surrounded by soldiers.

The cause of death and exact circumstances remain unknown, as Israeli authorities have not handed over Ahmad’s body to the Palestinians for an autopsy. The bodies of a further eight children, including the latest three, killed while carrying out alleged knife attacks have been withheld by Israeli authorities. Beyond the punitive nature of the action, it has made verifying the details and circumstances of the incidents more difficult.

In response to escalating violence, Israeli forces appear to be implementing a ‘shoot-to-kill’ policy, which in some incidents may amount to extrajudicial killings. International law requires that intentional lethal force be used only when absolutely unavoidable. Where individuals allegedly carry out a criminal act, they should be apprehended in accordance with international law and afforded due process of law.

At least 283 Palestinian children have sustained injuries since the start of October, based on DCIP’s initial data. DCIP defines a child as anyone under the age of 18.