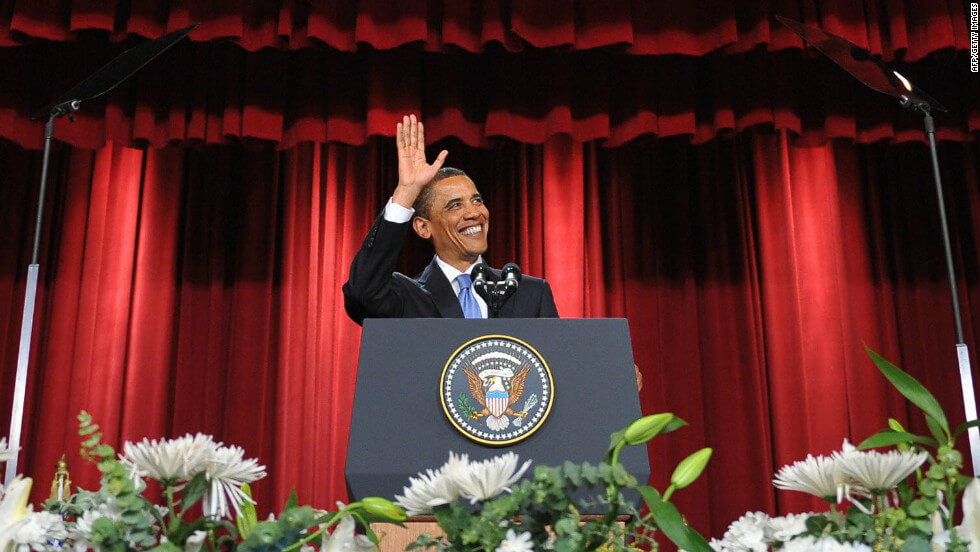 Why is anyone surprised by Obama’s one-sided statement standing with Netanyahu in the White House Monday?

Obama’s position on the Israel Palestine conflict was flawed from the beginning and people cut him way too much slack on this. He’s always talked about settlements being a problem and he talked about Palestinian “aspirations” two days ago, but he has never condemned Israeli violence against Palestinians the way he condemns Palestinian terror. This is the safe, acceptable mainstream way of saying you favor a two state solution without crossing a line. The line is this–Israel gets to use violence and Palestinians don’t, that’s the unspoken rule, and that explains why Obama says Israel has a “right, even an obligation to defend itself” when he would never use such words about Palestinians.

He is saying that Israel has human rights that must be respected right now without qualification, while Palestinians have aspirations that need to be negotiated. This is also how the New York Times editors think.

I’m starting to think this is the fundamental issue–who gets to use violence, or alternatively, whose violence gets condemned? I hate to put it that way because I don’t want the Palestinians to use violence either, but as a matter of principle that’s what the issue is. There is always going to be violence until a true solution is reached–Palestinians live with it on various levels, up to and including the occasional killing by an IDF soldier or settler during periods of “calm,” and this causes no outrage with the Obama/New York Times type of liberal, but when Palestinians use violence, whether against civilians or police or soldiers, it is terrorism and Israel has the right to do whatever it chooses to stop it. When you take that attitude then the “settlement” issue is more of a long-term abstract sort of thing, something to be negotiated. Aspirational. Even when Obama wanted a freeze it didn’t mean much, because he wasn’t going to do anything about it. For him, the freeze was also aspirational. Because, gosh, without a cessation in settlements someday in the future Israel might cease to be a Jewish democracy. But it’s a future problem and it is concern on behalf of Israel more than on behalf of Palestinians, though to be fair Obama does mention the hopes of Palestinians sometimes. That Palestinian rights are violated right now–well, he doesn’t see any urgency.

Only when Israelis get hurt should something forceful (literally) be undertaken and then it doesn’t matter how many Palestinians get hurt in the process.

I know what some will say. That in 2008, in Iowa, Obama said that Palestinians are suffering the most, and got taken to the woodshed. That in 2009, in Cairo, he spoke of Palestinian humiliation and occupation, and did not go to speak in Israel– and now even George Mitchell says he should have done so. The lobby came down on him for these statements, and he changed.

But I include the words like “occupation” and “humiliation” in the weak sauce category, unless there is an explicit acknowledgement of the actual brutality and viciousness that goes along with the occupation.  Yes, Palestinians might use those words too, but they know the full meaning.  Most Americans don’t.  These are not strong appealing-to-the-gut emotional words like “terrorism”.  If you are “humiliated” do you have the right to shoot a soldier?  By the rhetoric of Obama and likeminded semi-liberal Zionists, no.  But Israelis have the right to defend themselves, which means they can shoot any damn person they please, so long as they pretend the innocent civilian deaths were accidental or the fault of some terrorist using them as a human shield.  Or so long as they can say the victim was himself or herself a terrorist.

If you go back and look at Obama’s first reply to Jeremiah Wright, he was already bowing to the lobby. It might be his second reply where he broke ties, but I think it was his first. And of course he also distanced himself from Rashid Khalidi. Yes, Obama has folded, but his position was never as strong as some wanted to think.  I could see that in the Jeremiah Wright affair.  I had a few weeks (literally a few weeks) where I was enthused about him.  Then it became clear people were imagining things.