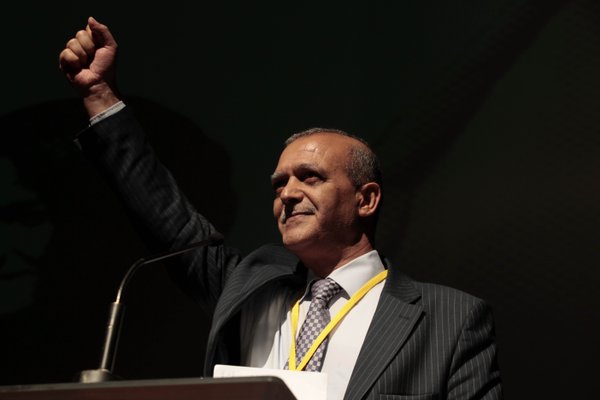 Interview with Jamal Sayed Youssef, Member of Central Committee of the Syrian Communist Party (Bakdash) and the full text of his speech at the electoral event of the Communist Party, Turkey on 30th October:

ICP: Can you tell the story of how have the communists taken part in the resistance movement in Syria?

JSY: I am a doctor and I was working in Idlib until El Nusra captured the town. I had a laboratory with clinical equipment worth millions of dollars and they seized the laboratory as a contraband of war. Now I am in Damascus, taking part in the struggle.

We support the national resistance against the aggressive policy of the reactionary regimes of Arab countries, USA, NATO and Turkey -putting aside the people of Turkey. In certain sensitive areas our comrades took up arms to defend themselves and their families. We also have comrades in the Syrian army. 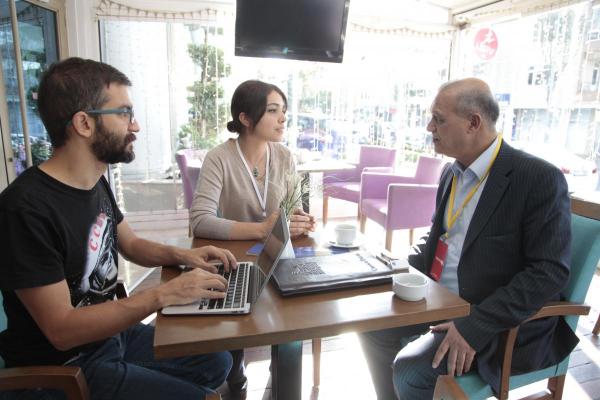 JSY: Out party was founded in 1924 and we have deep roots in the Syrian society. They call us ‘the party of bread’. Most of the men of letters, the poets have been influenced by the communist party tradition. Due to the stance during the French invasion, the party was also called ‘the party of emancipation’. Today, most of the party members are from the youth and we have a youth organization named after our founding leader Khalid Bakdash.

ICP: The imperialists are discussing whether Syria should go through a transition period ‘with or without Esad’. What does your Party think of this discussion?

JSY: This cannot be determined from outside Syria. Countries such as USA, Turkey, Qatar do not have the right to decide. This will be decided only by the Syrian people. Afterwards, when the war is over, we will return to the struggle of the workers and the impoverished. We will struggle against corruption, patronage, privatizations and liberal policies.

ICP: How are your relations with the Communist and Workers’ Parties of the region?

JSY: It is a hard question (he laughes). After the dissolution of the Soviet Union, most of the parties of the region moved away from the idea of communism. But we continued the Marxist-Leninist struggle. We are against the transformation of communist parties to social democrat parties.

There were parties who considered the insurrection in Syria as a people’s revolution. But they saw their mistake in due course. Some bourgeois Arab states even noticed that this was a plot against Syria. So now, nearly all parties of the region support our cause.

We declare to our comrades that Syria will not surrender!

The Speech of  Jamal Sayed Youssef at the electoral event of the Communist Party, Turkey on 30th October 2015:

Fraternal greetings from the members of the Syrain Communist Party which resists with its people and army!

Those who following the evil’s way, trying to raise mayhem, using religion to justify terrorists, created Islamic State and the others. And yet, they claim they are fighting them!

The dangerous games of the reactionists; of NATO and its servants;of Erdoğan, harm the people of Turkey as well as Syria.

The fundamentalist, reactionary, cruel and primitive administrations in the region, together with Israel, started military inventions in Syria supporting terrorist gangs.

As our Party has been warning since the beginning, developments show the only aim of NATO and Isreal is the bloodshed on the Syrians; to weaken us against the invaders; to divide the countries of the region.

Yet, our resisting people know very well, as our historic leader Halid Bakdash said: “Hating the colonialism is easier then to surrender”

Erdoğan’s effort to change his inevitable end will be defeated by your and other patriots’ struggle.

The target of these attacks is to beat Syria eventually. Because Syria is a front resisting imperialism. Syria is resisting with its people’s dedication, determination of its army for the independence and honour of the country. And of course with the solidarity of you, all the people of dignity.  I thank you once again for your solidarity on behalf of the Communist Party of Syria and the Syrian people.

Like Ammar Bakdash, our leader said: “The only power which does not surrender to the invaders is the power of the people” To stand up is not only our duty but it is also possible.

Syrian Communist Party stands shoulder to shoulder with the patriots in Syria against imperialists, Zionists and islamic reactionaries in order to empower the Syrian people. This is not only our patriotic but also internationalist duty.

We do not give up our class struggle while fighting the outsider enemies.

My comrades of the Communist Party, Turkey, forward to the Socialist Revolution!

The victory will belong to the Palestinian people struggling against Zionism.

The victory will belong to the people of Yemen against Saudi’s.

The victory will belong to the people of Iraq resisting invaders and terrorists.

Eternity is for our martyrs.

The victory belongs to all the people who resist.

I repeat: Syria will not surrender!

Long live the internationalist movement of the working class”