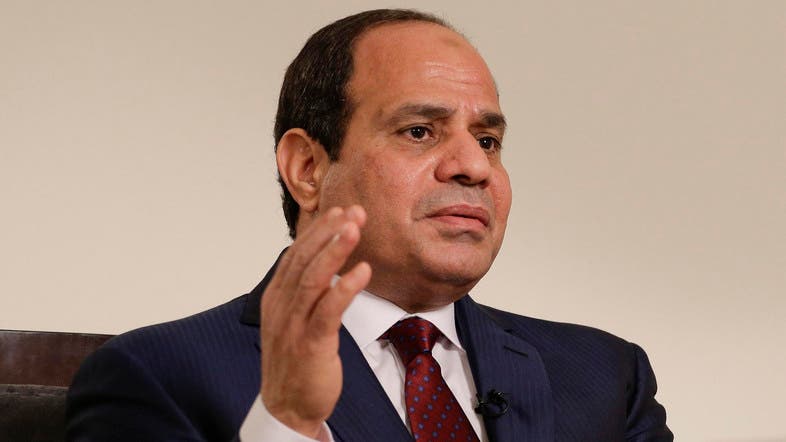 In an interview with the BBC, Sisi signalled a possible softening of position towards the Muslim Brotherhood

Egyptian President Abdel Fattah al-Sisi suggested the outlawed Muslim Brotherhood could again play a role in public life if Egyptians wanted a return of the grouping he currently classifies as terrorist.

Sisi, who launched the toughest crackdown on Islamists in Egypt’s modern history after toppling President Mohamed Mursi of the Brotherhood, was due in London on Wednesday on a visit to Britain criticised by rights campaigners.

The visit has drawn criticism from rights campaigners and some politicians, with the leader of Britain’s main opposition party saying it showed “contempt for human and democratic rights”.

In an interview with the BBC, Sisi signalled a possible softening of position towards the Muslim Brotherhood.

“The problem doesn’t lie with the government and it doesn’t lie with me. It lies with public opinion, with Egyptians. Egyptians are peaceful people and they don’t like violence. They reacted against the Muslim Brotherhood and are wary of them,” Sisi said in the TV interview, due to be broadcast in full on Thursday.

“This country is big enough to accommodate all of us. They are part of Egypt and so the Egyptian people must decide what role they can play.”

The Brotherhood, the Middle East’s oldest Islamist movement and long Egypt’s main political opposition, says it is committed to peaceful activism designed to reverse what it calls a military coup, when Sisi seized power from Mursi in 2013.

Security forces killed hundreds of Mursi supporters at street protests and thousands of others were arrested.

Senior Brotherhood leaders have been sentenced to death in what human rights groups call unfair trials.

Sisi has said tough security measures were needed to protect Egypt from what he describes as terrorist attacks by militants. ISIS’s Egypt affiliate has killed hundreds of soldiers and police since Mursi’s ouster.

The BBC said Sisi had stressed those sentenced to death would most likely not be executed because they were convicted in absentia or due to the appeals process.

Western diplomats say the death sentences could radicalise Islamists and would amount to political suicide.

Sisi’s visit to London comes soon after a visit by Chinese President Xi Jinping, when critics said Britain was selling off its assets to a country with a questionable rights record.

Around 150 demonstrators gathered outside Cameron’s Downing Street residence to protest against Sisi’s visit.

“David Cameron, can’t you see, Sisi killed democracy?” the group chanted from within a heavily-policed enclosure.

More than 50 lawmakers have signed a motion calling for the visit to be cancelled.

Cameron’s spokeswoman has said “no issues will be off the table” when the two leaders meet on Thursday. But Jeremy Corbyn, the leader of Britain’s opposition Labour Party, said just welcoming Sisi “makes a mockery of government claims to be promoting peace and justice in the region”.

The Egyptian leader told the BBC efforts to improve democracy in Egypt were “a work in progress” which would take time, but his people now had the right to choose their leader.

“Now a president can only serve one or maximum two terms. Never again will Egyptians be ruled against their will,” he said. Egyptians have been ruled by men from the military since army officers deposed the monarchy in 1952.

“No one is oppressed in Egypt, but we are living through incredible times,” Sisi said. “Egypt doesn’t want to become like other countries in the region.”