Amid weeks of violence in Jerusalem, Israeli police and special forces raided an East Jerusalem hospital for a third day in a row on Thursday and fired tear gas, sound grenades and rubber bullets into the medical compound, injuring three patients.

Israeli police first burst into Makassed hospital in the Mount of Olives neighborhood on Tuesday with a court order to confiscate the medical records of a 16-year old patient who was treated on October 13th for injuries from a gunshot wound.

“They were not trying to confirm that he was shot—because they have him [the patient] in custody and so they know he was shot and they can confirm the bullet wound, but they wanted to see who was with him, who came in with him to the hospital,” said Dr. Rafiq Hussein, the director of Makassed hospital, who questioned why police undertook a militarized operation inside of his facility. “They were after not a dangerous person, or a wanted person, only a file,” he noted.

The following day police returned to the hospital in increased numbers. Hussein said hospital staff were unable to tend to patients as 40 to 50 masked officers again ran into the hospital seeking security footage and interviews with the staff who treated the injured minor.

“They stopped what they were doing because police had come into the middle of the hospital. There was almost a clash between the staff and the Israeli police, because this is a hospital and they [the police] should not have been here,” Hussein said.

Two doctors were taken to a nearby police station where they were questioned about the individuals who accompanied the wounded 16-year old patient, according to Hussein. Police requested an additional four nurses report for interviews over the weekend. Several medical staff were questioned inside of the hospital.

“They have asked about he shifts and the name of everyone who was on the shifts, their ID number and telephone numbers,” Hussein said. “They confiscated the hard disk of the camera system, they took it, and they now asked for interrogations with our nurses.”

On Thursday doctors and nurses held a demonstration in the gated courtyard of Makassed hospital in protest of the police entry, which they said disrupted their ability to care for patients.  Hussein indicated all hospital personnel complied with the court order, appearing for depositions and turning over the requested file and security footage.

“We were protesting because of the two-day of incursions by the police, so then police came in. They started to shoot tear gas, sound bombs and rubber bullets inside of the hospital premises,” Hussein said. “There were a couple of patients who were hit by rubber bullets actually.”

Palestinian media reported that three patients not participating in the medical staff demonstration were shot with rubber bullets during the demonstration.

“This is the first time in a long time that they police enter in large number, masked, with guns to look for information,” Hussein said, “Well of course this was carried out during the Intifada [Palestinian uprising], it was the same, but now this is new to East Jerusalem.” 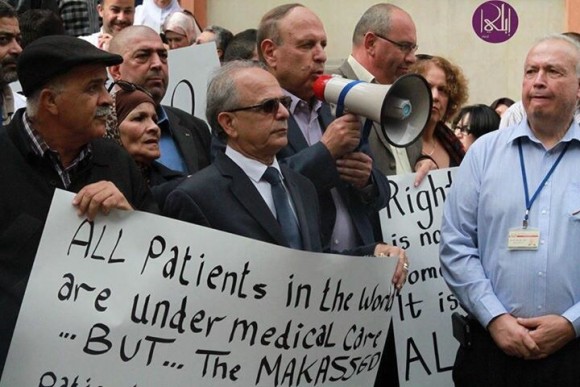 Israeli police also erected a checkpoint last week outside of Makassed hospital’s sister facility, Augusta Victoria hospital, located a half-mile away on the Mount of Olives. The crossing is one of more than a dozen new checkpoints built across East Jerusalem neighborhoods in recent weeks, during which Israeli forces have killed more than 60 Palestinians, and Palestinians killed ten Israelis in attacks. 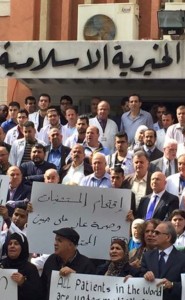 A group representing six East Jerusalem hospitals said  in a statement last week that the checkpoints prevent ambulances from leaving and entering the facility with speed and are “a major obstacle to the medical and humanitarian work.”

“These concrete barriers/roadblocks have led to major delays in the arrival of patients and their companions to their hospitals’ destination, employees and medical staff such as doctors and nurses, as well as to the disruption and delay of the patients’ movement from one hospital to another,” said the East Jerusalem Hospitals Network.