On Monday evening, the Israeli military claimed that a Palestinian man stabbed an Israeli passenger on a bus in Jerusalem, and a soldier on the bus shot and killed the man. 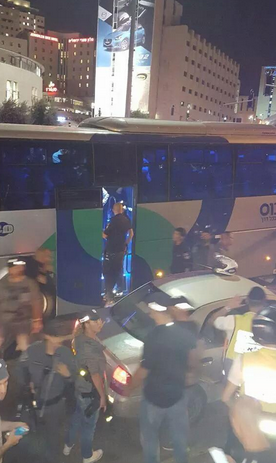 But the Israeli military account is contradictory, claiming that the victim of the stabbing attack was a civilian passenger, but that a soldier was taken to the hospital with light wounds. No civilian victim was identified or taken to the hospital, which has led to speculation that the Israeli military spokesperson’s account may not be entirely accurate.

During the past two weeks of Israeli military and paramilitary violence against Palestinian civilians, the Israeli military has claimed that there have been eight incidents of Palestinians attempting to stab Israelis. But only one of these incidents has actually held up under scrutiny. The others remain questionable – particularly as the Israeli claim that the Palestinians ‘stabbed’ or ‘attempted to stab’ Israelis has been reported immediately after the incident, with no evidence presented or investigation of the claim.

On Monday alone, the Israeli military claimed that there were four incidents of Palestinians attempting to stab Israelis. Of these, one has video evidence showing the Palestinian pulling a knife when Israeli police attempt to search him. The other three, including this most recent incident on the bus, remain uninvestigated at this point, and the actual facts of the incidents remain unclear.

Following the incident on the bus, the Israeli Mayor of Jerusalem issued a statement in which he called on Prime Minister Binyamin Netanyahu to further crack down on Palestinians protesting the conditions of life under Israeli occupation. The Mayor stated, “To our shock and horror, the cruelty of murderers who attack innocent civilians and children on their way home from school knows no limit, confronting us all with a shocking form of evil.”

The Mayor’s statement did not appear to include the attacks on Palestinian schoolchildren by Israeli military and paramilitary forces, such as the killing of 12-year old Abdul-Rahman Obeidallah in Bethlehem on his way home from school last week.