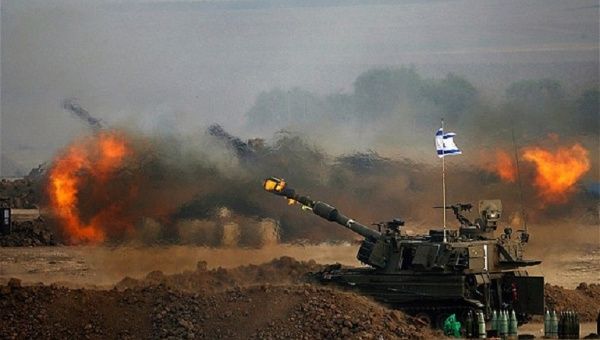 OCCUPIED JERUSALEM, (PIC)– Israeli Temple Mount Group called on Israeli settlers to continue their mass break-ins into al-Aqsa Mosque till the end of the week.

The group called for intensifying Israeli break-ins and presence at the compound till Thursday despite the end of Jewish holidays.

According to Jerusalemite analysis, such calls came as part of the Israeli plot to impose a spatial and temporal division at the holy shrine.

Over the past weeks, Israeli settlers have intensified their provocative break-ins into al-Aqsa compound under heavy police protection, raising tension in occupied Jerusalem and West Bank.

The Temple Mount Group is an extreme-right wing group that was organized in 1967 by a former officer in Israeli Occupation Army. Arab Israeli protesters flash the sign of victory in front of Israeli security forces during a rally in solidarity with Palestinian prisoners held in Israeli jails on June 27, 2015 in the northern Israeli town of Umm al-Faham

RAMALLAH, PALESTINIAN TERRITORIES: The Israeli army shot dead a 13-year-old Palestinian during clashes at a refugee camp near Bethlehem on Monday as violence spiked in east Jerusalem and the occupied West Bank, police and emergency services said.

Abdel Rahman Abdullah was struck in the chest by Israeli fire at the Aida refugee camp, the sources said.

He is the second Palestinian killed by Israeli soldiers over the past 24 hours as clashes have spread.

On Sunday night, an 18-year-old Palestinian was killed during clashes in Tulkarem in the West Bank.

There have been fears that the sporadic violence could spin out of control, with some warning of the risk of a third Palestinian intifada, or uprising.

The Syrian Coalition calls on the United Nations to assume legal, humanitarian and ethical responsibilities towards the tragedy of the Syrian people. It also calls upon the Arab League to condemn the Russian aggression on Syria and to hold an emergency meeting to discuss its implications.

The Syrian Coalition renews condemnation of terrorist acts committed by the Assad regime as well as Russian and Iranian aggression, denouncing the UN lukewarm position on these violations.

“The regime’s latest military escalation in Homs province, backed by Russia and Iran, is designed to complete the plan to empty Homs province of its indigenous population and to execute the “Useful Syria” project undertaken by Iran in Damascus.

Under the pretext of countering ISIS, Russia’s air force struck the towns of Rastan, Talbeesah, Girnata and Um Sharshouh in northern rural Homs, killing and injuring dozens of civilians. Meanwhile, regime forces continue to pound the besieged neighborhood of Waer in Homs with heavy artillery, amid regime’s build-up of troops, including many Iranian and Afghan mercenaries, to what appears to be an attempt to storm the towns of Rastan and Talbeesah.

BETHLEHEM (Ma’an) — A 13-year-old Palestinian boy was shot and killed by Israeli soldiers during clashes in Aida refugee camp in Bethlehem on Monday, Palestinian medics told Ma’an.Abed al-Rahman Shadi Obeidallah, was shot near the heart by Israeli forces during clashes in the refugee camp.He was taken in a civilian car to Beit Jala hospital where he immediately underwent surgery. However, doctors later pronounced him dead.The child was initially reported to be 12 years old, although medics later confirmed he was 13.Another teenager was reportedly shot with live fire in the leg during the same clashes and taken to hospital for treatment, locals said.An Israeli army spokeswoman said she was looking into the reports.Overnight Sunday, Israeli forces shot dead a Palestinian teenager during clashes in the northern West Bank village of Bala, east of Tulkarem.Red Crescent officials told Ma’an that 18-year-old Huthayfa Othman Suleiman was shot in the chest during clashes and died in the operating room.The killings follow violent confrontations over the weekend in which the Palestinian Red Crescent documented at least 96 Palestinians who were wounded by live rounds or rubber-coated steel bullets in clashes with Israeli forces and settlers.Overnight Saturday, Fadi Samir Mustafa Alloun, 19, from the East Jerusalem village of al-Issawiya, was shot dead by Israeli forces after allegedly attempting to stab a group of Israelis.The incident took place just hours after another Palestinian was shot dead when he stabbed and possibly opened fire on a family of Israelis at the Old City’s Lion’s Gate.Two Israelis were killed and two others injured, including a two-year-old infant, in the attack.