Dozens of Israeli police and soldiers carried out a morning raid on the Al-Aqsa mosque in occupied Jerusalem. Witnesses said concussion grenades and tear gas were used and several Palestinians were injured. Police said the raid was part of a “security operation.”

According to the latest reports, the mosque and the premises have now been sealed off. The decision follows a morning of fierce clashing between various elements and the Israeli police.

During the raid, the Israelis surrounded the compound, detaining two guards and entering through the Chain Gate. Scores of worshipers were inside the mosque at the time. 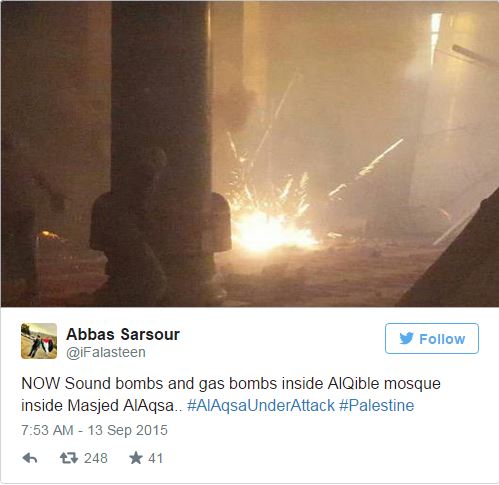 Dozens of people were removed, the International Middle East Media Center reports. Meanwhile, all men below the age of 50 were prevented from entering the mosque grounds, as they headed there for Sunday morning prayers. Palestinians responded by throwing stones and fireworks, Israel’s Ynetnews.com reported, adding that several of the worshippers also barricaded themselves inside the mosque.

Reports by the Jerusalem Post indicate the raid was part of a security operation, involving a search for explosives. The police and the Shin Bet security forces earlier received information of a security threat posed by Muslim elements. This led to a city chase, with several masked Arab youths reportedly making their way toward the Al-Aqsa mosque, setting up road blocks on the way, to slow the Israelis down.

The clashes come just hours before the start of the Jewish New Year, Rosh Hashanah, with celebrations to begin at sunset and continue until Tuesday evening. 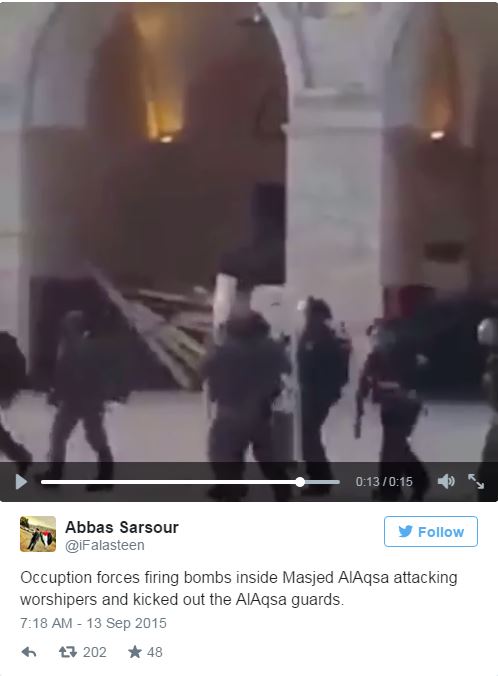 Sonic and gas bombs could be heard, according to eyewitnesses. The masked men targeted by the Israeli forces are reported to be among the worshippers, engaging the police. 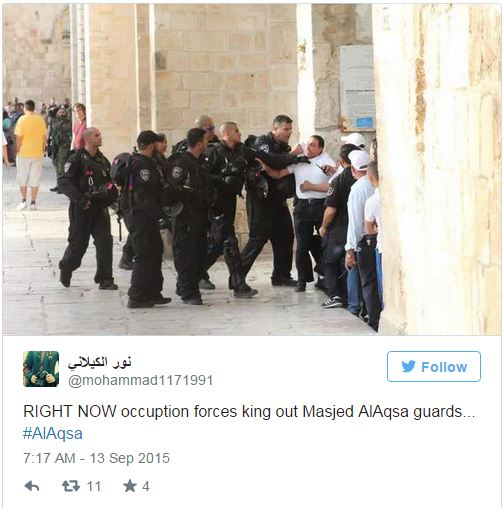 The Al-Aqsa mosque is considered to be the third holiest place of worship for Muslims, with locals fiercely against Jews praying near the Noble Sanctuary, known to Jews as Temple Mount. The site, however, is also considered holy by the Jews, with groups on both sides clashing over it.

Tensions have been boiling for months at the site in Old Jerusalem, occupied by Israel since 1967. Clashes took place in July, as Palestinians threw rocks at Jews trying to visit the site on one of their most important holidays – the Tisha B-Av.

After the 1967 war when Israel captured East Jerusalem, Jews were restricted from praying on the Al-Aqsa plaza. Today, Jewish ultranationalists are pushing Israeli authorities to allow Jewish prayers on the compound outside Al-Aqsa, which stands above the Western Wall, something that irks Jerusalem’s Muslims.

Right-wing Israeli Prime Minister Benjamin Netanyahu is often accused of supporting the Jewish ultranationalists. On the Muslims side, however, are the Murabitat and the Murabitun – women’s and men’s groups, translated as ’the sentinels’. They closely monitor Jews who are allowed, under police guard, to visit the holy site five days of the week. They hurl abuse at them and often throw rocks.

Israel considers the two groups the main cause of tension at the flashpoint site, holy to both religions. The Muslim groups, outlawed on “security” grounds, have been accusing Israelis of trying to change the situation on the ground and give the Jews expanded rights over the holy site.