More than 90 percent of the Gaza Strip’s water is undrinkable. The rest is quickly running out. A combination of factors is rapidly depriving the population of this most basic of needs. RT investigated day-to-day life under these conditions.

Just one fresh water source exists today, according to the locals – a coastal aquifer beneath the ground that is shared with Israel and Egypt. But Gaza is situated downstream from Israel, and Palestinians accuse the Jewish state of using the situation to its advantage, employing water deprivation as a tactic against the civilian population.

The grim water statistics are part of a recent UN report on Gaza, which says the strip will become uninhabitable by 2020. A number of reasons compound the problems, according to the document by the United Nations Conference on Trade and Development (UNCTAD).

Palestinian children, who fled their houses during an Israeli offensive, fill bottles with water at a United Nations-run school, sheltering displaced Palestinians, in Gaza City

The Gaza Strip’s GDP dropped 15 percent in 2014, with 72 percent of households suffering extremely low food security and unemployment at a record high of 44 percent. Further stress was added by relentless IDF assaults. With three military operations in the last six years, coupled with eight years of economic blockade, prospects for recovery are looking very bleak.

The UN says that 500,000 people have been displaced in Gaza as a result of last year’s IDF operation alone. More than 20,000 Palestinian homes were destroyed, and 148 schools and 15 hospitals and 45 primary health-care centers were severely damaged. Gaza is one of the most densely populated areas in the world.

But worse still is when the populace is deprived of the prime source of life – water. Without it, no reconstruction and no rebuilding of lives can take place. Medicine, sanitation, hygiene and crucial facilities that depend on water all suffer.

RT investigated the extent of the hardship under these conditions.

“We can’t drink it, cook with it, or wash in the kitchen with it… we are forced to buy all the clean water separately,” said Umm Ibrahim Amna Abdel’al, as she stood in her kitchen, little more four bare cement walls and a sink.

A delivery pickup truck trundled through the streets outside with a water tank sitting in the back. 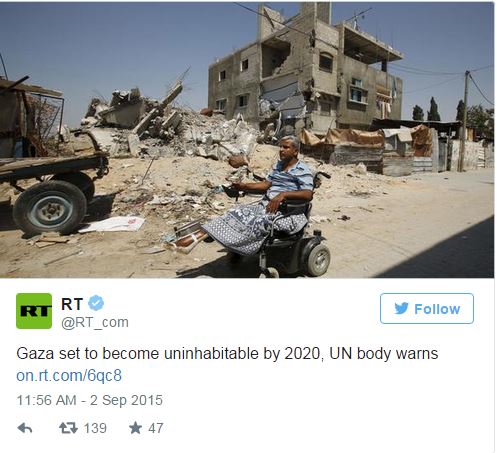 “The last war on Gaza, of course, resulted in the destruction of some of the infrastructure, the water holes and the pumping stations were [heavily hit.] More than 50 percent of the water infrastructure could not be accessed,” said Mahmoud Elkhafif, UNCTAD’s special coordinator for assistance to the Palestinian people.

“Part, of course, vanished,” he added.
RT’s Lizzie Phelan tasted what remains of the Strip’s water for herself: “This coffee tastes like it has salt not sugar in it. That’s because the water that’s used to wash it – like much of Gaza’s water – is contaminated with sea water.”

The woman went on to describe how “tiny kids suffer from cramps and colic” – a syndrome commonly associated with stomach infections.

“See my hand?” she pointed to the irritated skin on her palm. “It is because of the salty water. I have a skin infection. The water is full of salt. It is like sewage.”

And salt isn’t the only problem. The water coming into homes is also full of nitrate – a carcinogenic. The levels rose even higher last year, during Israel’s bombardment of sewage pipes and clean water pipes. Now, the two chemicals have mixed.

But even though the water is filthy, Gazans pay an exorbitantly for it.

Elkhafif put it bluntly: “Gaza suffers a catastrophic issue with water quality and water supply. And it’s a shame on the world that they are still watching this.”

Unless the situation is resolved, the Strip stands on the brink of a full-scale humanitarian catastrophe much greater than any airstrikes can cause.