Marwa Fahmy, Mohamed Fadel Fahmy’s wife, upon hearing the verdict which sentenced her husband to three years in prison

Clooney, who attended the trial in Cairo as one of Mohamed Fadel Fahmy’s lawyers, said that the verdict “sends a very dangerous message in Egypt.”

“Every single third party that has looked at the case from the beginning – from the UN, to the EU, the US, the UK – everyone has said there is no evidence to sustain any of the charges,” said Clooney.

“Egypt’s own Supreme court when they looked at this case said there wasn’t sufficient evidence,” added Clooney as she was surrounded by throngs of journalists outside the court in Cairo.

“But there is a solution, your President, President Sisi, has said from the beginning of this case that he wishes the prosecution had never been brought and that he would intervene at the end of the judicial process to grant a pardon if the journalists were re-convicted. That’s exactly what has happened.” 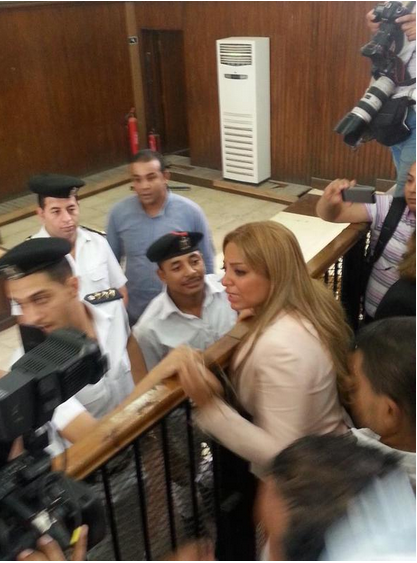 Australian journalist Peter Greste had been released in February and deported under an order by Egyptian President Abdel Fattah Al-Sisi.

“Shocked. Outraged. Angry. Upset. None of them convey how I feel right now,” tweeted Peter Greste from Australia, adding that the three year sentences were “so wrong.”

“Today’s verdict is yet another deliberate attack on press freedom. It is a dark day for the Egyptian judiciary,” said Souag in a statement.

Meanwhile, the Committee to Protect Journalists said that the journalists were sentenced to prison despite a lack of evidence and called on Egypt’s government to end the prosecution.

Amnesty International joined the CPJ in its condemnation, adding that the verdict must be overturned immediately.

The court session was attended by diplomatic officials from the UK, the Netherlands, Canada and Australia. The Canadian, British and Dutch Ambassadors attended the session in person.

In his personal capacity, Dutch Ambassador Gerard Steeghs said that the result was “no good news.”

Judicial sources have confirmed that Fahmy, Greste and Mohamed can appeal Saturday’s sentencing.

Watch Amal Clooney outside the Court in Cairo