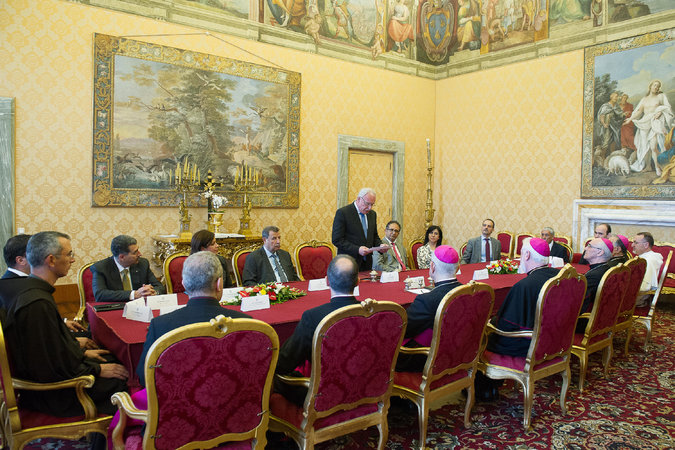 Palestinian Foreign Minister Riad al-Malki, standing, at a treaty-signing ceremony at the Vatican on Friday

VATICAN CITY — The Vatican on Friday signed a treaty with the “state ofPalestine,” a development that the church hopes will lead to improved relations between Israel and the Palestinians.

The accord, the result of 15 years of negotiations, covers “essential aspects of the life and activity of the Catholic Church in the State of Palestine,” the Vatican said in a statement.

The Vatican’s foreign minister, Archbishop Paul Gallagher, said the agreement could be a “stimulus to bringing a definitive end to the longstanding Israeli-Palestinian conflict, which continues to cause suffering for both parties.”

He also called for the two countries to take “courageous decisions” so that the “much desired two-state solution may become a reality as soon as possible.”

The Vatican said last month that it would sign the agreement, which Archbishop Gallagher described as offering “a good example of dialogue and cooperation” to other countries in the Middle East, where some Christians have suffered persecution.

Archbishop Gallagher and Foreign Minister Riad al-Malki of thePalestinian Authority signed the treaty at a ceremony in the Vatican.

The Israeli Foreign Ministry expressed its disappointment on Friday, calling the signing of a treaty “a hasty step” that hurt the prospects of peace.