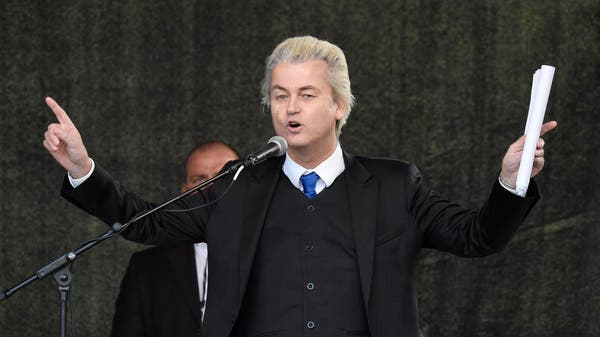 The platinum-haired Wilders, whose Freedom Party (PVV) gained popularity in the Netherlands on an anti-Islam ticket, denied that a cartoon exhibition would be provocative

Dutch anti-Islam politician Geert Wilders said on Wednesday he wanted to stage a parliamentary exhibition of the cartoons depicting the Prophet Mohammed that sparked a deadly shooting in Texas that left two dead.

“I am going to request Parliament to exhibit the same cartoons as those that were displayed in Garland,” Wilders told AFP on Wednesday, referring to the Dallas suburb where the shooting took place on Sunday.

Police said the two gunmen drove up to the conference center in Garland, where the American Freedom Defense Initiative was organizing a controversial Mohammed cartoon contest, and opened fire with assault rifles, hitting a security guard in the ankle.

A Garland police officer then shot and killed both gunmen with his service pistol.

U.S. investigators are probing the backgrounds of the two slain gunmen after the Islamic State of Iraq and Syria (ISIS) group claimed it had ordered the shooting.

Wilders, 51, had left the conference center, where he made a speech criticizing Islam, shortly before the incident.

“I want to send a message that if you use violence to suppress free speech the only effect is that we’ll do it even more,” Wilders said, adding “we must show we’ll not be intimidated.”

The platinum-haired Wilders, whose Freedom Party (PVV) gained popularity in the Netherlands on an anti-Islam ticket, denied that a cartoon exhibition would be provocative.

“I don’t want to provoke, but at the same time we must show that we’re standing for freedom of speech,” Wilders said.

Ever since forming his own party in 2006, the firebrand politician has been a divisive figure in the Netherlands, which prides itself on its long but fading tradition of multi-cultural tolerance.

Wilders himself has no hesitation in branding the Koran as a “fascist” book and have before likened it to Hitler’s “Mein Kampf.”

Public prosecutors received more than 6,000 complaints of discrimination after television footage in March last year showed Wilders asking party faithful in The Hague whether they wanted “fewer or more Moroccans in your city and in the Netherlands?”

“Fewer, fewer,” the crowd shouted with a smiling Wilders saying: “We’re going to organize that.”

The ISIS claim marks the first time that the extremist group, which has captured swaths of territory in Syria and Iraq using brutal methods, is alleged to have carried out an attack in the United States.