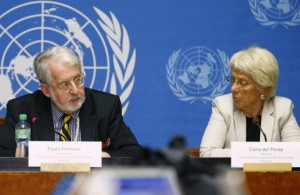 United Nations war crimes investigators plan to publish names of suspects involved in Syria’s four-year war and push for new ways to bring them to justice, in a radical change of strategy announced on Friday.

Diplomatic sources said the independent Commission of Inquiry, led by Brazilian investigator Paulo Pinheiro, may publish some or all of hundreds of names on secret lists of suspects at the U.N. Human Rights Council on March 17.

The investigators have already drawn up four lists including military and security commanders, the heads of detention facilities, and commanders of non-state armed groups, including the so-called “emirs” of radical groups, they said. They now have a fifth list ready.

“Not to publish names at this juncture of the investigation would be to reinforce the impunity that the Commission was mandated to combat,” they said in a report to the Human Rights Council.

The report, the latest in a series documenting human rights abuses such as torture, sex crimes, murder and the use of child soldiers, said the international community had failed in its duty to protect Syria’s civilians.

Vice-president of the Syrian Coalition Hisham Marwa calls for referring all war criminals, including the Iranian-backed militant groups, to the International Criminal Court, voicing concern of the Russian and Chinese veto that may block the move.

“We welcome the report as it comes as an outcry to address the human conscience and take a sound position of the holocaust taking place in Syria,” Marwa said. “We once again stress that war criminals must be held accountable and that justice take its course,” he adde.

It is worth noting that the Assad regime has killed over 300,000 Syrian civilians so far, including 11,000 prisoners who died under torture and were documented by 55,000 photos leaked by a defected military photographer code-named Caesar. Regime forces also attacked Eastern Ghouta with chemical weapons in August 2013, killing more than 1,400 civilians, mostly women and children, and also fired more than 100 Scud missiles at Syrian cities and towns in addition to thousands of barrel bombs that are still rained on every rebellious area.