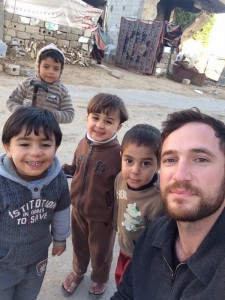 Three days ago Dan Cohen tweeted this photo from Gaza with seven words, “Selfie with the greatest threat to Israel,” and the tweet went viral, retweeted 16,000 times. I spoke to Cohen yesterday by Skype in Gaza to ask him about the photo and its resonance.

Where did you make the shot?

I was in Khuza’a, right on the border, east of Khan Younis. The village got destroyed this summer– not entirely but major parts of it. And there were just these cute kids and these kids– as I know you’re aware– are referred to as the demographic threat to Israel. I wanted to invoke that openly-racist language that is used by mainstream political leaders all over the world, including by President Obama.

When did the idea come to you?

It wasn’t like a big plan. There are hordes of adorable children all over the place here. I try and take a lot of photos throughout the day on my phone and then 12 hours later I was going through my pictures in Gaza City. The tagline came to me later, and I tweeted it. I thought I would get 50 retweets. But within 24 hours, it had 10,000 retweets, and it continues to go up.

Has this ever happened to you before?

No I’ve never had anything like this resonance before.

How do you explain it?

I got a notification from some kind of company that tracks trending. A few hours after I tweeted it, it was trending in London, then a few hours after that in Malaysia. So I mean obviously there’s a huge Muslim population in Malaysia, I think that explains why… But in terms of why it went viral, there are a couple things that come to mind to me. The racist language– the very racist concept of children being called a threat simply for their existence– people know about that, that’s not lost on people around the world. And the devastation that Israel just wrought on Gaza that killed 500-plus children, that also doesn’t go unnoticed. The Bakr boys image on the beach, or the father who was shown crying as he holds his child with his head blown off, those images are burned into people’s brains.

I think there were a couple of other factors. People really want to see something happy from Gaza. There’s so much devastation here, it pains people to wonder what the devastation is really like and what people are going thru, so to see sweet innocent children smiling helps.

And there’s one more thing. To be honest, I think people are happy to know that not all white Jews support Israel. So when they see a white guy with the name Dan Cohen whether they know I’m Jewish or think I’m Israeli, that it’s possible for a white Jewish man to recognize that these children are called threats– people respond to that.

What does it feel like to be in Gaza?

Right now it’s cold, it’s windy, it’s rainy and there are tens of thousands of people who have no real shelter. I just got back from Shuja’iyeh and it is really cold out there, a little above freezing, and there are children everywhere, and it’s devastating. Even just to go into Gaza City, where buildings are mostly intact– I’m in an apartment with the windows blown out, and I’m fine, I can leave. But sometimes, my head spins: just the fact that I’m in this prison for mostly children who have been reduced by the world to rubble people, and then I can come and go freely. I don’t have any way to explain that feeling. The dissonance is massive.

As a journalist, can you set out to do another tweet that will get this kind of attention?

No. I was surprised when it got a couple hundred retweets in like 15 minutes. I was really surprised by that.

Is it a grassroots trend or are there major nodes and celebrities?

I did see that the foreign minister of Venezuela retweeted it. I think; I have to check that. But in terms of celebrities– no, I’m not aware of any.

Dan, you used to do rope access on big buildings in New York for a living. How long have you been a journalist?

I’ve been a journalist a long time; and I can tell you you’ll remember this for the rest of your career. So do you think that’s the heroin of being a journalist, to have a hit like this?

No. I have to say, my focus especially when in Gaza, is really not on myself. I’m surrounded by devastation all the time, so any great feelings about myself and what I’m doing is just passing, if there’s even a moment.