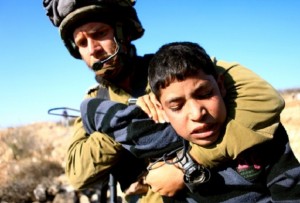 A UN report said that the Israeli occupation forces have arrested, interrogated and prosecuted around 7,000 children between 12 and 17, mostly boys, over the past decade

Days of Palestine, Jerusalem –Israeli settlers attacked on Monday Palestinian boy in the city of Jerusalem, Israeli soldiers arrested another one from same city.

Witnesses said that three Israeli settlers attacked a Palestinian boy of around 12 years old in the occupied Palestinian city of Jerusalem.

Israeli police recognised the incident and said that the boy was evacuated to the hospital in the city, but kept the identity of the boy unknown.

Spokeswoman Luba Samri said the boy is in a good condition and police are investigating the incident.

The Israeli police have been attempting to impose media blackout on the incident in order to keep the attackers safe and far from being held accountable.

Meanwhile, the Israeli forces arrested on Monday a 10-year-old Palestinian boy in the Jerusalem neighbourhood of Silwan, a local information centre said.

Majdi Abbasi from Wadi Al-Hilwah information centre said that the Israeli forces in Ein Al-Luza area of Silwan neighbourhood arrested the Rashid abu-Sarah, took off his shirt, blindfolded him, and took him away in a military jeep.

Abbasi did not have more details about the arrest and the Israeli authorities did not issue any statement or remarks about the incident.

The UN Children’s Fund 2013 report said that the Israeli occupation forces have arrested, interrogated and prosecuted around 7,000 children between 12 and 17, mostly boys, over the past decade.

A recent UNICEF report showed that the child arrests by Israeli occupation is equivalent to “an average of two children each day.”