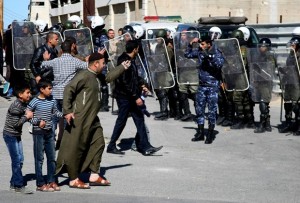 The PA security services, including the Preventive Security and Presidents Guards attacked the protesters trying to disperse them by firing teargas canisters and using batons

Palestinians planned for the protests to take place after the Friday prayer in order to stage large numbers of Palestinians in the streets in solidarity with the Palestinian occupied city of Jerusalem and Al-Aqsa Mosque.

After the Friday prayer, hundreds gathered in front of Al-Nasr Mosque in the city of Nablus, but before moving from the site, the PA security forces violently dispersed them using teargas and batons.

Witnesses said that more than 20 protesters were wounded in the crackdown.

In Al-Khalil, hundreds of protesters took to the streets after the Friday prayer. They raised Palestine flags and large posters for Al-Aqsa Mosque.

The PA security services, including the Preventive Security attacked them trying to disperse the rally by firing teargas canisters at them.

Witnesses said that the protesters made their way to Jisser Halhoul and clashed with the Israeli occupation forces using stones. PA security services withdrew from the site.

No casualties were reported, but tens suffered suffocation problems because of the heavy use of tear gas.

Earlier this week, PA President Mahmoud Abbas reminded the Israeli occupation, which blamed him for inciting violence, that he and his security services guaranteed no attack against Israeli targets during the 51-day Israeli war on the Gaza Strip ended on August 26.

In the recent weeks, during the tension in Jerusalem, the PA security services arrested hundreds of Palestinians mostly from Hamas and Islamic Jihad in the occupied West bank in order to undermine any attempt for a new intifada in solidarity with the holy city.