Quite simply it is horrific. We suffer the sonic booms of war jets, buzzing drones, presence of war ships, artillery fire and enemy tanks – all in an area that is only 40 KM long and 15 KM wide. Fear and terrorism are maximized because all these weapons of war are being used in such a tiny piece of land.

Because the Zionists are so powerful and omnipresent in every influential sector of society and government worldwide they are literary allowed to massacre the people of Gaza as they feel fit despite our attempts via social media to let the world know what is happening via photographs and eye witness accounts. Everyday I and many like me, upload images of death and destruction, send out pleas for help and words of desperation but it largely falls on deaf ears.

During the current war, the Zionist have created many excuses to commit atrocities and genocide. They completely destroyed the al-Shija’eyyah neighbourhood because they claim there were a number of IOF soldiers killed while they were invading our land. What do you expect? They are killing our people and destroying our homes. In response they pounded the neighbourhood with about 600 shells that resulted in 200 people being massacred and their bodies left decaying in the streets because we don’t have the infrastructure to deal with such destruction and loss of life. Hospitals are without power and also attack targets, there is no army, no navy and we are in desperate need of medical supplies.

Israeli terrorists think it is acceptable to bomb our homes if they give us less than 50 seconds warning. I ask you, what could you do in 50 seconds? How far could you run? What if you have children, elderly or disabled relatives? What then?

You might wonder how the IOF they plan their targets? What you hear in the media is the claim that the targeted home belongs to a Hamas member, his relatives, friends or hosts. The drones play a major role in the act of killing and supposedly in the selection of targets. With their ever present buzzing, they create constant stress and spread the fear that there might be an imminent bombing at any time. These drones that cover the entire sky of the Gaza strip with their clever state of the art cameras which monitor everything on the ground and have a high capability of distinguishing civilians from resistance fighters (note the resistance fighters surely have the right to practice their universal right to defend the people of Gaza?) could easily spot ordinary civilians going about their daily lives or simply trying to flea and avoid them. But they don’t. With these tactics they create horror and kill anyone in their path.

The random killing of civilians is a device to terrify us. Every single person in the Gaza Strip feels as I do, that he or she is the next target of the Israeli bombing to be added to the already rising death toll. 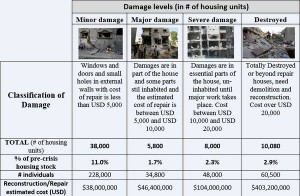