Security coordination between Israeli police and the police under the supervision of Dayton ensured criminalisation of the intifada heroes. 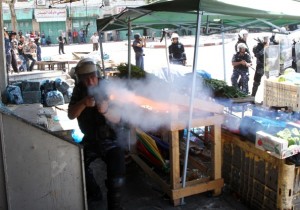 A member of the Palestinian security forces fires tear gas towards Palestinian stone throwing demonstrators as they block them from heading towards an Israeli check point in the center of the West Bank town of Hebron on August 22, 2014, durung clashes following a protest to show support for Palestinian militants fighting against the Israeli army in the Gaza Strip

No fair professional can deny the efforts made by Lieutenant General Keith Dayton in establishing a modern Palestinian police body by equipping the force with the latest gadgets to face crime, after the Palestinian National Authority received the new security portfolio consistent with the Oslo Accords, — the set of agreements between Israel and the PalestineLiberation Organisation (PLO ).

This professional officer did not stop at making cosmetic reforms in rehabilitating buildings, equipment, labs, communication networks, police vehicles, and quality arming, in fact he changed the structure of the police, by referring elderly police officers to retirement and substituted them with younger officers. He trained them in neighbouring Arab countriesaccording to programmes and courses applied in the best police academies both in the US and the Zionist entity.

That was not enough according to the security articles of the Oslo agreement, because the real change in the Palestinian security infrastructure was a necessary requirement, because the Palestinian police before Dayton were a national police force which grew up under the umbrella of the Fatah resistance organisation and in the general framework of resistance adopted by the PLO where the organisations consider the Zionist entity as hostile state, hence Dayton did not hide the importance of changing the doctrine of the Palestinian police.

This change in the security doctrine was not appreciated by police officers of the Palestinian national police such as the intelligence chief and other officers who did not like this systemic change, especially the parts related to the coordination with the Zionist entity’s intelligence, which was raised as a hostile intelligence. That is why these officers preferred to resign rather than to collude with the Palestinian leadership or with Dayton, whom they identified closely by virtue of their experience and refused to serve the security forces of the Zionist entity.Thereafter, the resistance and its members according to the new doctrine became criminals that must be handed over to the security authorities in the Zionist entity after being charged with terrorism.

This is what happened after the security coordination took place between the Zionist entity’s police and the Palestinian police under the supervision of Dayton.

These Palestinian security measures would not have occurred without a significant change in the structures of the ruling authorities regulating the Palestinian society and controlling the behaviour of its members.

With the exception of the legislative authority represented by the Palestinian National Council, the other authorities, like other members of the West Bank community are divided. 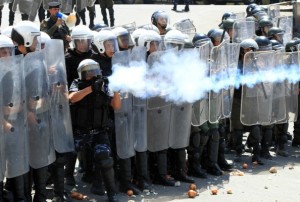 Some adopted normalisation in various fields and accepted the terms of the Oslo Accords under the supervision of people such as Dayton that were placed in their positions by the US and Israeli intelligence services. Most of those are politicians who have their own targets and believe in the visions painted by the Oslo agreement, promoted the two-state project and believed in the normalisation project. They naturally reject armed resistance. Others reject the Oslo Accords completely and were not fooled by the US promises. Hence they simply left to other areas where they can continue resistance in its various forms, including armed resistance. Most of the people in this category left for Gaza while a very small number of them remained in the West Bank.Others succumbed to the PNA’s orders, where they complied but felt great despair. Those were not able to continue resistance nor were they able to leave.

Others still know no other way but to be Zionist intelligence agents. Prior to the Oslo Accords they were hypocrites, and eventually they became soldiers working for the Zionist project.

This bunch was smuggled by the Zionist intelligence from Gaza across the sea after their conspiracy against the resistance was revealed.

It seems these days that Dayton’s followers are in control of the West Bank community. Hence, the people there did not revolt during the aggression on Gaza.

This is not surprising, because the Palestinian security treads the normalisation route and is in complete accordance with the US and Zionist intelligence agencies. Moreover, this is the ultimate goal of the Americans and Zionists and their followers in Palestine and abroad.

It is no secret on the Arab street that among the conditions contained in the various ceasefire initiatives the most important seems to be the disarming of the Gaza resistance. If that happens, Dayton would have achieved his most important projects in the service of the Israel’s security.